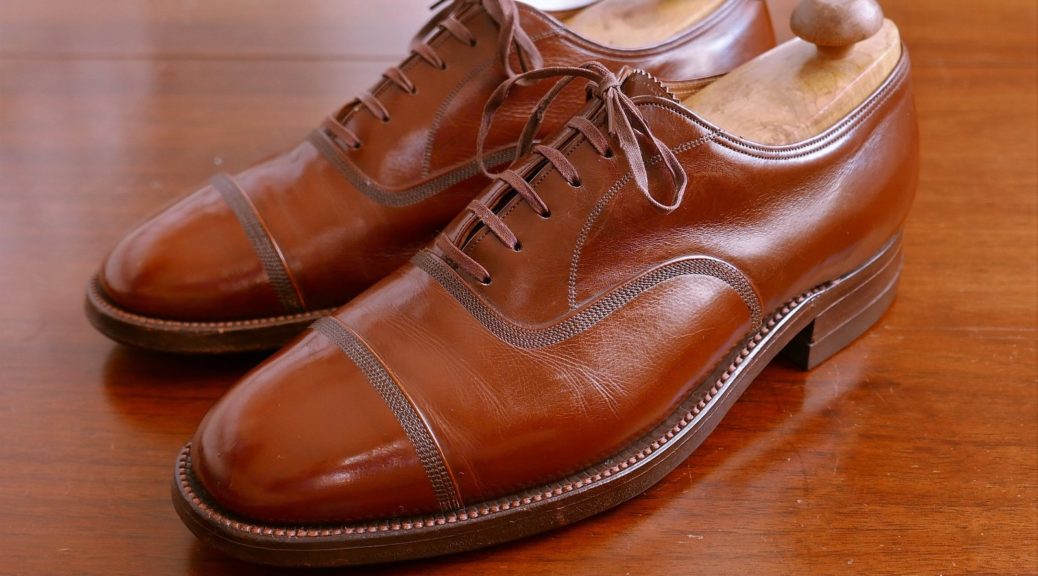 A few months ago, I started compiling a list of Cold War era (1945-1990s), American men’s dress shoe manufacturers and brands. This was a period of consolidation, contraction and eventually collapse for the US shoe industry. I was hoping to add a paragraph about each with a logo or two. It was intended to help myself and the many readers who send me emails asking me, “Have you heard of this brand?”.

Well, this project was a bit too ambitious given the huge number of companies and brands. So here is the list as it stands now. I will add content to it as I learn more. I am sure I missed a number of brands and manufacturers. There are probably mistakes too.

Please leave a comment to augment or correct any of the information below.

Banister– Premium shoe brand founded in 1845 in South Weymouth Mass. Purchased by Ezra Stetson in 1934. Later purchased by Freeman. Click this link for a full history of Banister shoes.

Barclay– Nettleton brand started 1929. Shoes were outsourced to other manufacturers.

Bostonian – Founded in 1899 as Commonwealth Shoe Co, Whitman MA. Whitman plant closed in 1964. Merged with Kayser-Roth Corp. in 1968. Purchased by Gulf and Western Industries in 1975. Purchased by Clarks in 1979. Shoes made at Hanover factory after purchase. Shoes no longer produced in USA.

Boyd’s – St Louis MO based retailer. Out of business in 1995. Produced a premium line of shoes branded Threadneedle Street.

Danner – Founded in Chippewa Falls, Wis in 1932 then moved to Portland, OR in 1936. Focused on logging boots. Merged with LaCrosse Footwear Inc in 1994. Continues to make boots in Portland to this day.

Dr. Scholl’s– founded in Chicago in 1906. Focused on orthotics. Brand sold to Schering-Plough in 1968. Name owned by Caleres.

Endicott Johnson – founded in Endicott, New York, USA 1899. Peaked in 1950s and declined in subsequent years. Went through a series of owners in 1990s. Now owned by Rocky Shoes & Boots

Florsheim – Founded in Chicago in 1892. International Shoe Co purchase in 1952. Apollo Group purchased brand in 1991 and spun out as a separate company in 1992. Purchase by Weyco out of bankruptcy in 2002. USA production ended in early 2000s.

FootJoy – Founded 1857 in Brockton, Massachusetts. Originally Burt and Packard Shoe Company then renamed to Field and Flint Company. FootJoy branded created in 1920s and adopted by the company in 1970. Passed through a series of owners. Closed last Brockton factory in 2009

Frank Brothers – New York shoe retailer. Contracted with a number of firms including Johnston and Murphy to produce premium shoes with the Frank Brothers brand

Frye – Founded in 1863 in Marlboro, Massachusetts. Sold in 1998 and changed owners multiple times since then. Most manufacturing moved offshore but still produces a collection of made in USA shoes and boots.

Genesco – Formerly the General Shoe Corporation. Name changed in 1959. Owner of Johnston & Murphy and Jarman amongst other brands

Hanover Shoe Co – Founded in Hanover Pennsylvania in 1899. Grew to be one of the largest US shoe manufacturers using a mix of retail stores and direct sales. Purchased by Clarks in 1978. USA production ended in 1996.

Johnston & Murphy – Founded in Newark NJ in 1850. Purchased by General Shoe Corporation in 1951. Outsourced most shoe production by 2002 but produced a line of shoes in USA until 2018.

King Size – Brand focusing on large sizes. Purchased by Knapp in 1966. Liquidated in 1967

Lefcourt – New York retailer at 400 Madison Ave, New York. The company primarily sourced their shoes from English shoe makers but also had Alden produce some of their stock. Company was the first to introduce the tassel loafer. The retailer ceased operations in the 1990s

Lloyd & Haig – New York retailer. Founded in 1929 and closed in the 1996. Contracted with a number of firms including Bostonian and Hanover to produce premium shoes with the Lloyd & Haig brand

London Character – New York based chain. Closed in the 1970s?

Nettleton – Founded in Syracuse NY in 1878 as a premium shoe manufacturer. Sold to Endicott Johnson in 1968. Purchased by Ed Tognoni in Dec 1981. Closed Syracuse factory in 1984. Purchased by United States Shoe Co in Dec 1984 and production moved to Freeman factory in Beloit Wisconsin. Ed Tognoni purchased name in 1990 out of Freeman bankruptcy.

Nicks Boots – Founded in 1964 in Spokane WA. Still in business and continues to make high quality work boots for lineman and loggers

Nunn-Bush – Founded in 1912 in Milwaukee WI. Purchased by Weyenberg in August 1967

Quoddy – Perry, Maine Founded: 1909. Dormant for years until the brand was revived in the 1990s. Once again making traditional moccasin style shoes and boots in Maine.

Robert Kirk – San Francisco retailer founded in 1939 and sold to Cable Car Clothiers in 1972. Had a line of Alden made shoes under the Robert Kirk brand.

Russell Moccasin– Based in Berlin, WI and founded in 1898 by Will Russell. Maker of fine shoes and boots. Still making shoes in Berlin to this day

San Antonio Shoemakers (SAS) – founded in 1976 in San Antonio, Texas. Makes are range of men’s and women’s shoes in the USA.

Sibley’s Shoes – Detroit based footwear chain. Out of business in 2003. Produced a line of shoes with the store name. Dexter made many of the pairs.

Stacy Adams – Founded in 1875 in Brockton. Name owned by Weyco

Stetson Shoe – Founded in 1885 in South Weymouth Mass. Stopped production in 1969 and licensed the name to Bostonian. Production ended in 1973. Name sold to Kayser-Roth.

Taylor Made – EE Taylor Corp brand. Unrelated to the current Taylor Made golf company (not 100%).

Weinbrenner Shoe Co – Founded in 1892. Based in Merrill, Wisconsin. Still makes some Thorogood work boots in the USA.

White’s Boots – Founded in West Virginia then moved to Spokane, WA in 1905. Long time work boot maker and still producing made in USA boots and shoes. Purchased by ABC-Mart owned LaCrosse Footwear in 2014.

William Hahn Shoe – In house shoe line for Hahn’s Shoes, a Washington DC based shoe retailer. Retailer started in 1876 and purchased by US Shoe Corp in 1962. Sold to a private partnership in 1992 and and bankrupt in 1995.

Wolverine– Founded in 1883 in Grand Rapids, MI. Still making boots in the USA including the 1000 Mile Boot

73 thoughts on “Vintage Made in USA Brands”