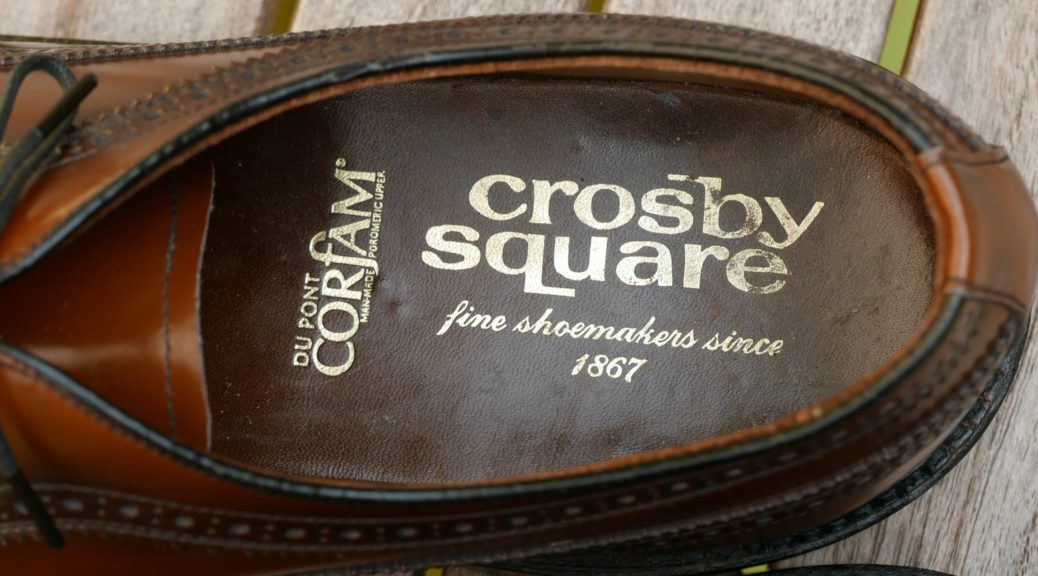 I watched the HBO show Westworld a few months ago. If you haven’t seen the series, the show is a drama set in the American old west. Except it’s not the old west, it’s the future. A future where robots in the form of humans cater to actual humans who act out their fantasies in a sort of a massive theme park. The robots are virtually indistinguishable from humans. They are not mostly human like the “synthetics” in the Alien movies. This is convenient for HBO since they can hire real actors to play robots. You find out in the show that the humans have issues. Deep issues. So do the robots. And it ends poorly for the humans.

Making a robot look, move and think like a human is a difficult challenge. At this point, we aren’t even close to someone wondering, “Is that a beautiful a woman or a robot?”. AI needs to advance. Robot agility needs significant improvements. And skin is particularly hard to replicate. Human skin stretches and folds in particular ways. It has a distinctive feel when touched. Who is going to like an Instagram hot robot selfie if the robot has strange skin creases? Well some people but not all of us. 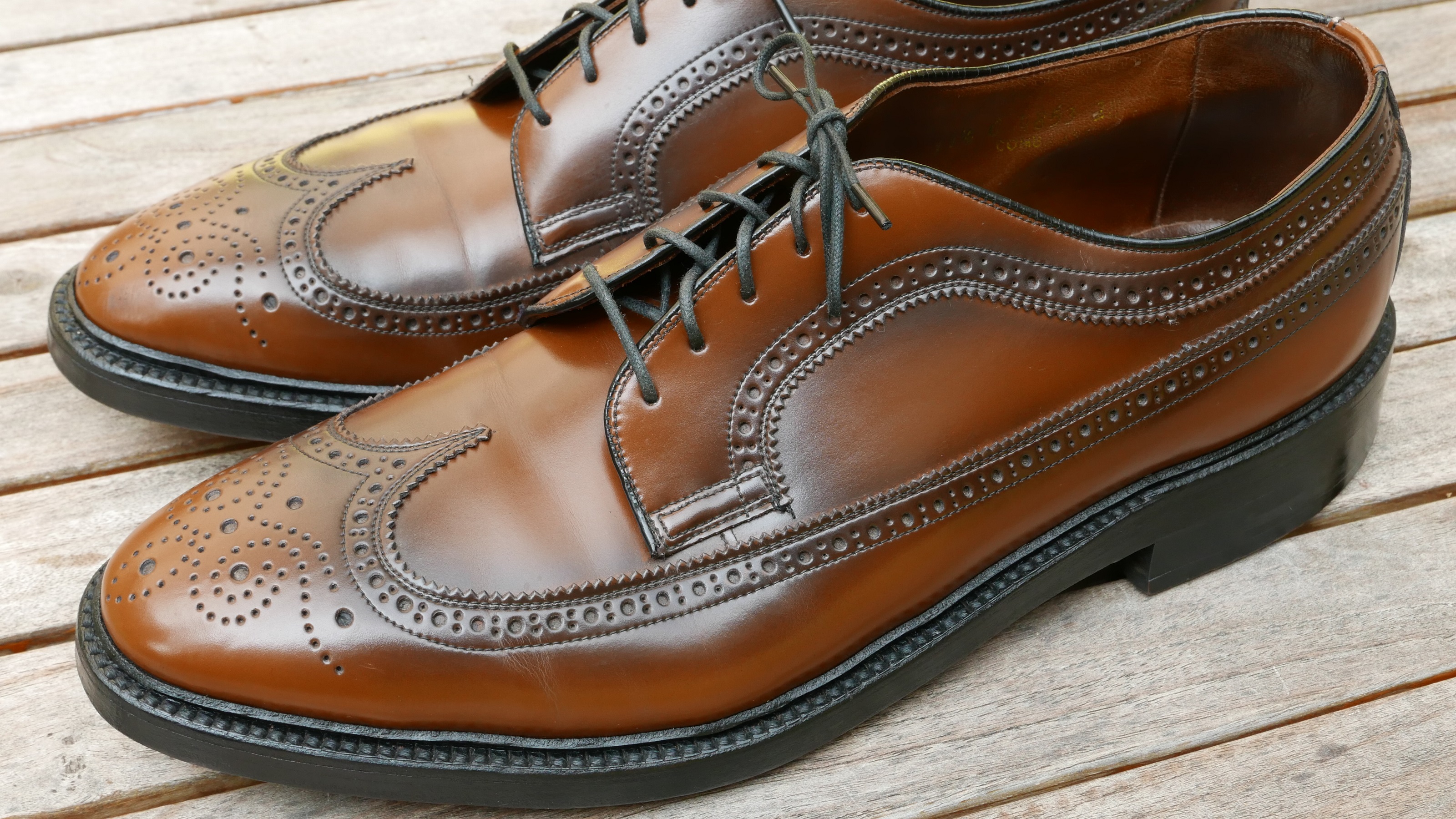 In the 1960s, DuPont tried to tackle a similar problem to artificial skin when they researched and developed a porous synthetic (poromeric) leather the company branded as Corfam. It was meant to look, feel and perform like real leather. Only better. And DuPont wanted it to be the material to dominate the shoe industry. DuPont spent $100 million ($600 million in 2017 dollars), developing and marketing the product which was launched in 1964. It was a space age product for the space age. 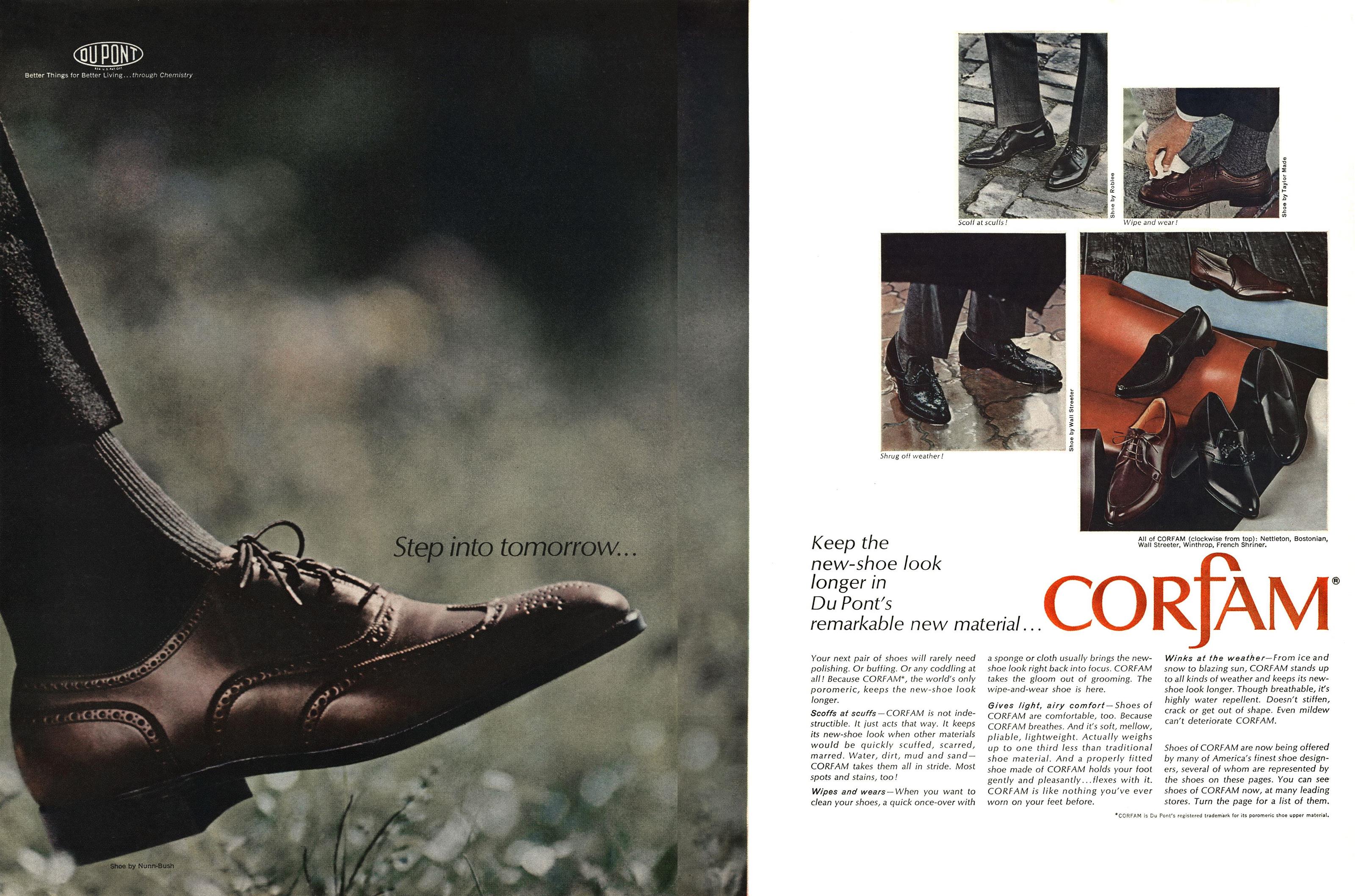 Long story short, Corfam didn’t replace leather. Consumers still preferred the real thing on their feet. And in 1971, DuPont ended the product and wrote off the investment. Corfam RIP. Another poromeric product called “Aztran” from Goodrich was also ended around the same time. It turned out that “There’s a great future in plastics“, wasn’t true for shoes (Katharine Ross, wow). Other poromeric products are still produced and used in military or golf shoes but none are branded as Corfam.

I have been looking for a good condition or NOS Corfam pair in my size since 2015. I was curious about the material and the history of it. Top shoe manufacturers like Nettleton, Nunn-Bush, Hanover, Stetson and even Edwin Clapp made Corfam shoes. DuPont was promoting and subsidizing the use of the product (see ads below). I was particularly wanting a Nettleton pair since it was Nettleton. I have never seen a Florsheim or Alden model that uses Corfam.

Eventually I found a quality Crosby Square pair in lightly used condition and in my size. Below is a a photo of the pair when I bought them. I doubt they had been worn in 40 years. 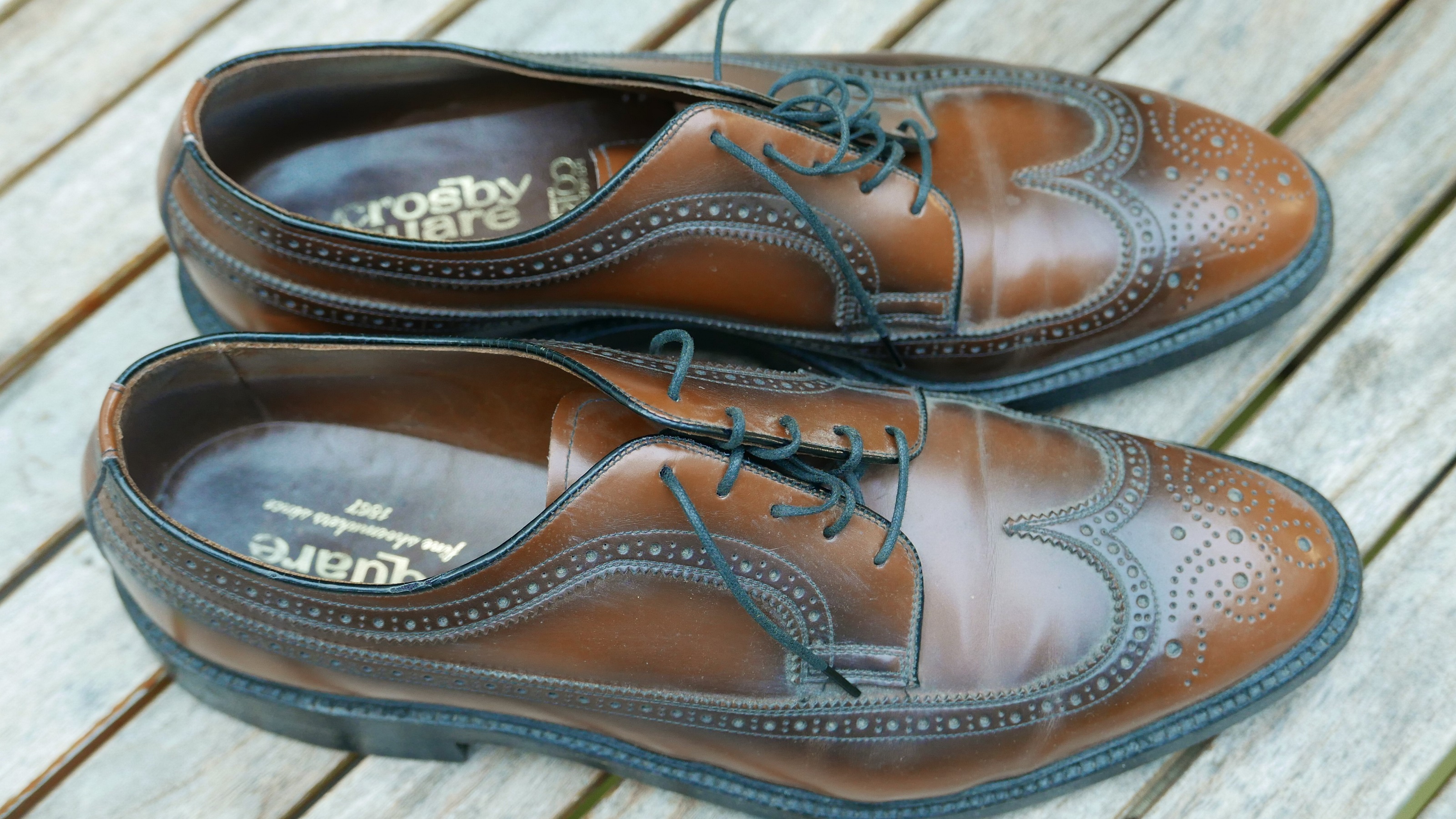 What was my first impression of Corfam shoes? They were more leather than not. The soles, heels and lining were leather. And that the upper looked more like plastic than leather. It had a distinctive, unnatural Corfam east-west creases in the vamp. The shoes also smelled liked plastic. 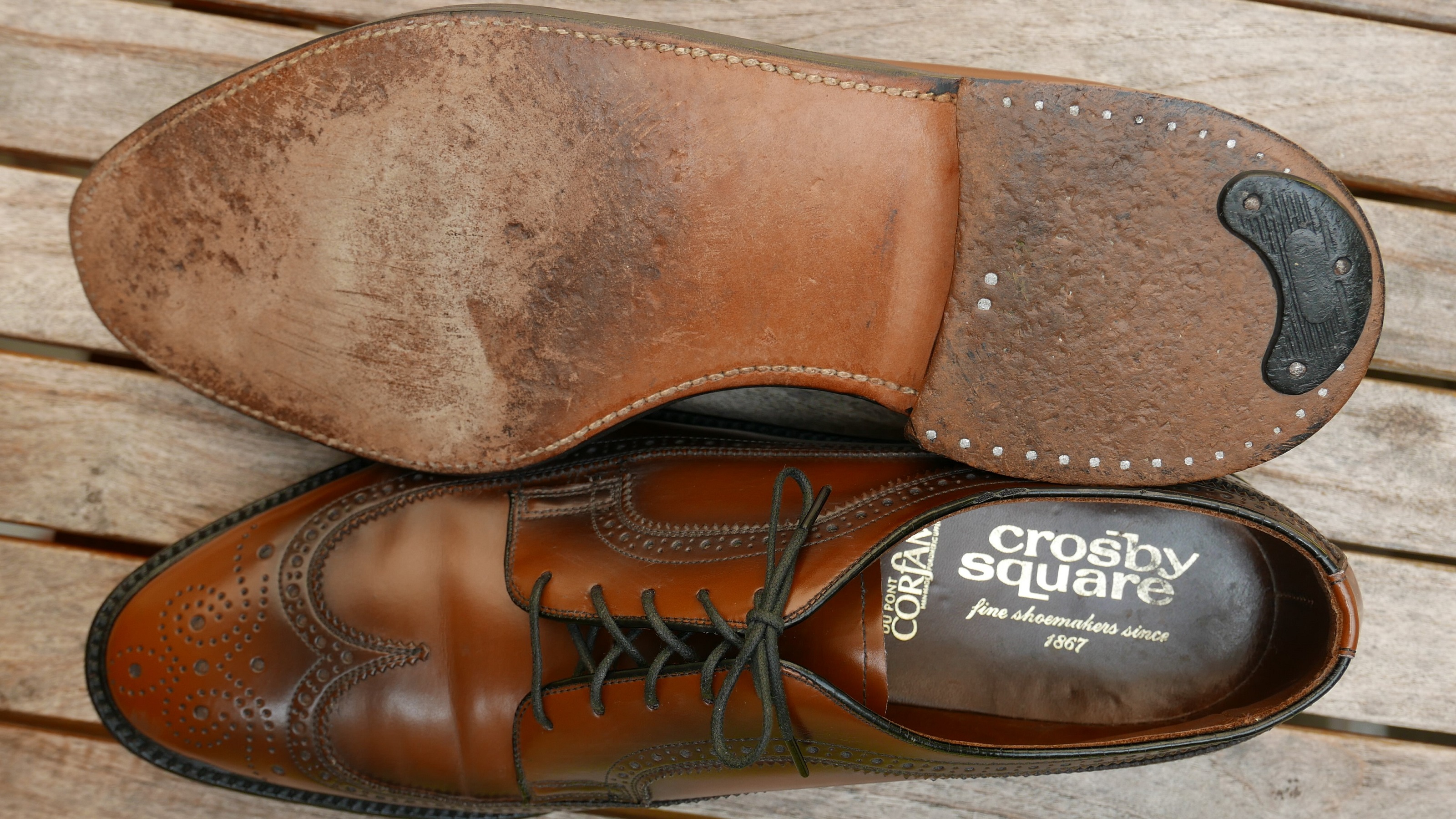 Another reason I wanted a pair was to wear them. I haven’t really found any firsthand accounts of wearing Corfam. Some people mention online that Corfam shoes were hot and uncomfortable. But I doubt that was from real experience since DuPont stopped selling the material in 1971. How bad can they be? DuPont made a very significant investment into engineering the product. And not everything we read is true. At least, someone has been claiming that.

First, I needed to prep the pair for wear. Old Corfam ads claimed it was a miracle material that just needed a wipe for maintenance. I found this claim to be true. The shoes cleaned up easily with just some brushing and a wipe with a damp cloth. I used no polish on them. 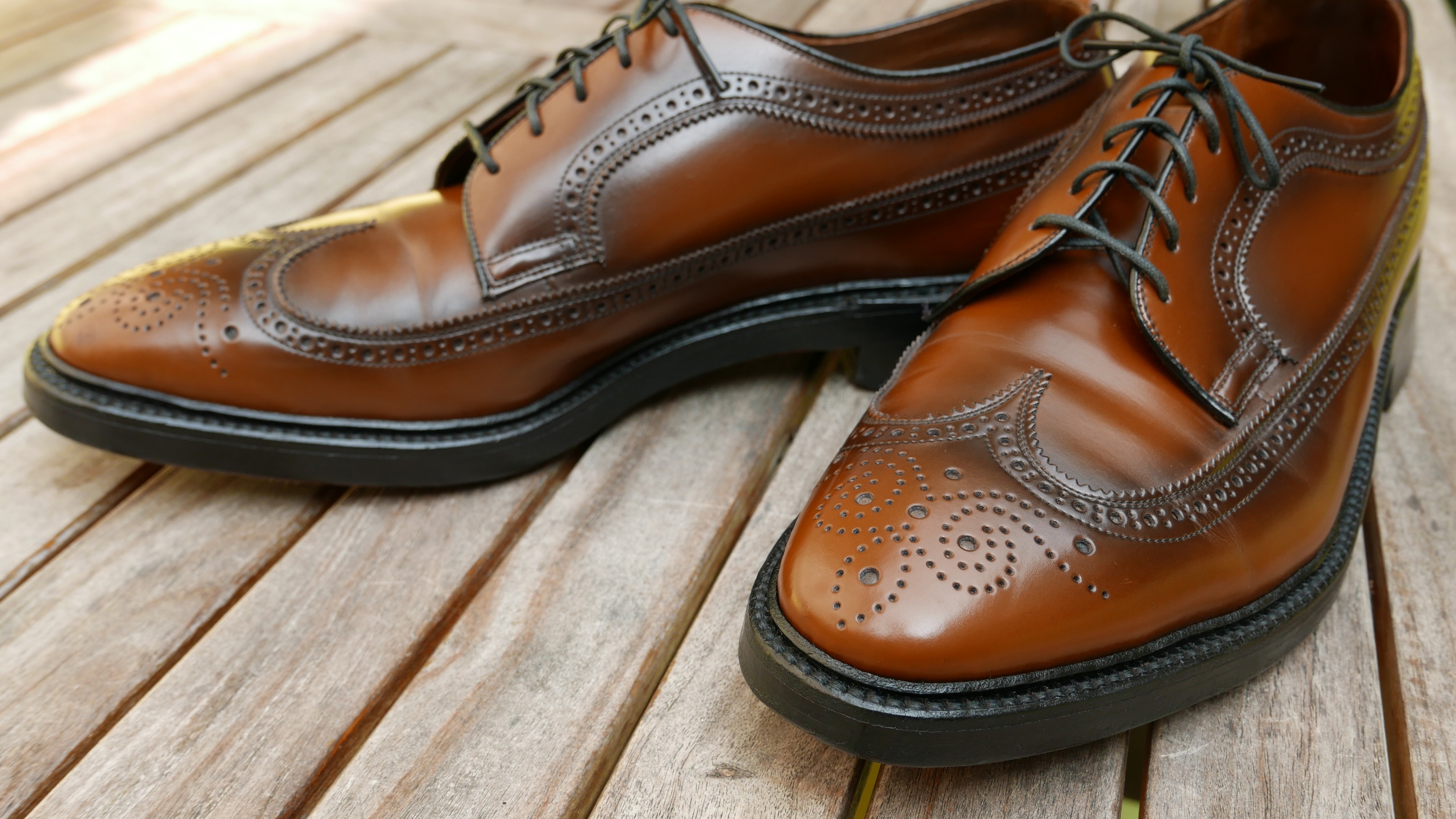 Corfam ads also stated that that the material resisted scuffs. But my shoes were scuffed after what appears to be very limited use. After working on them, some of the surface scuffs were removed but the deeper scratches in Corfam couldn’t be easily fixed or covered. They were gouges into the plastic. 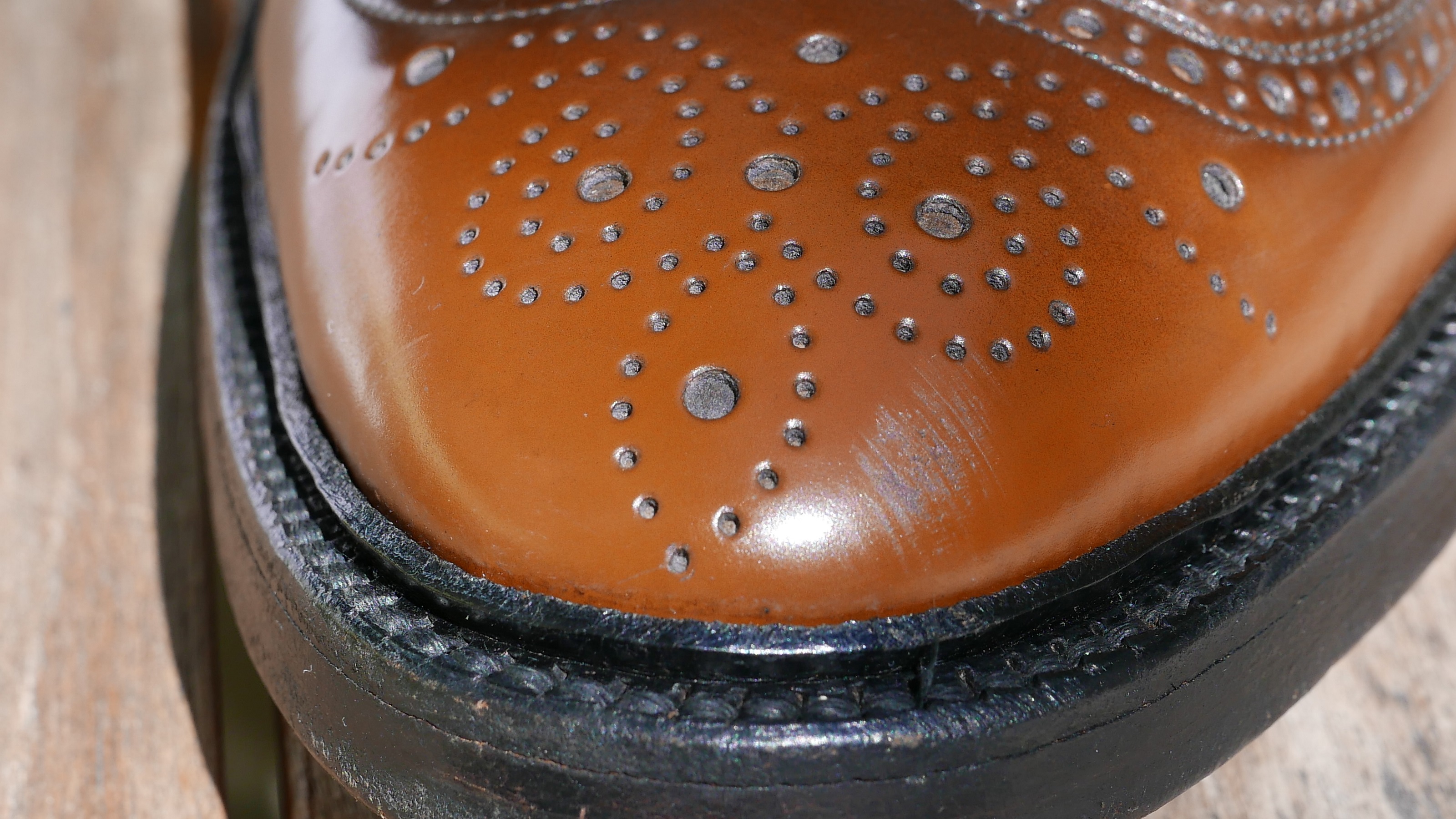 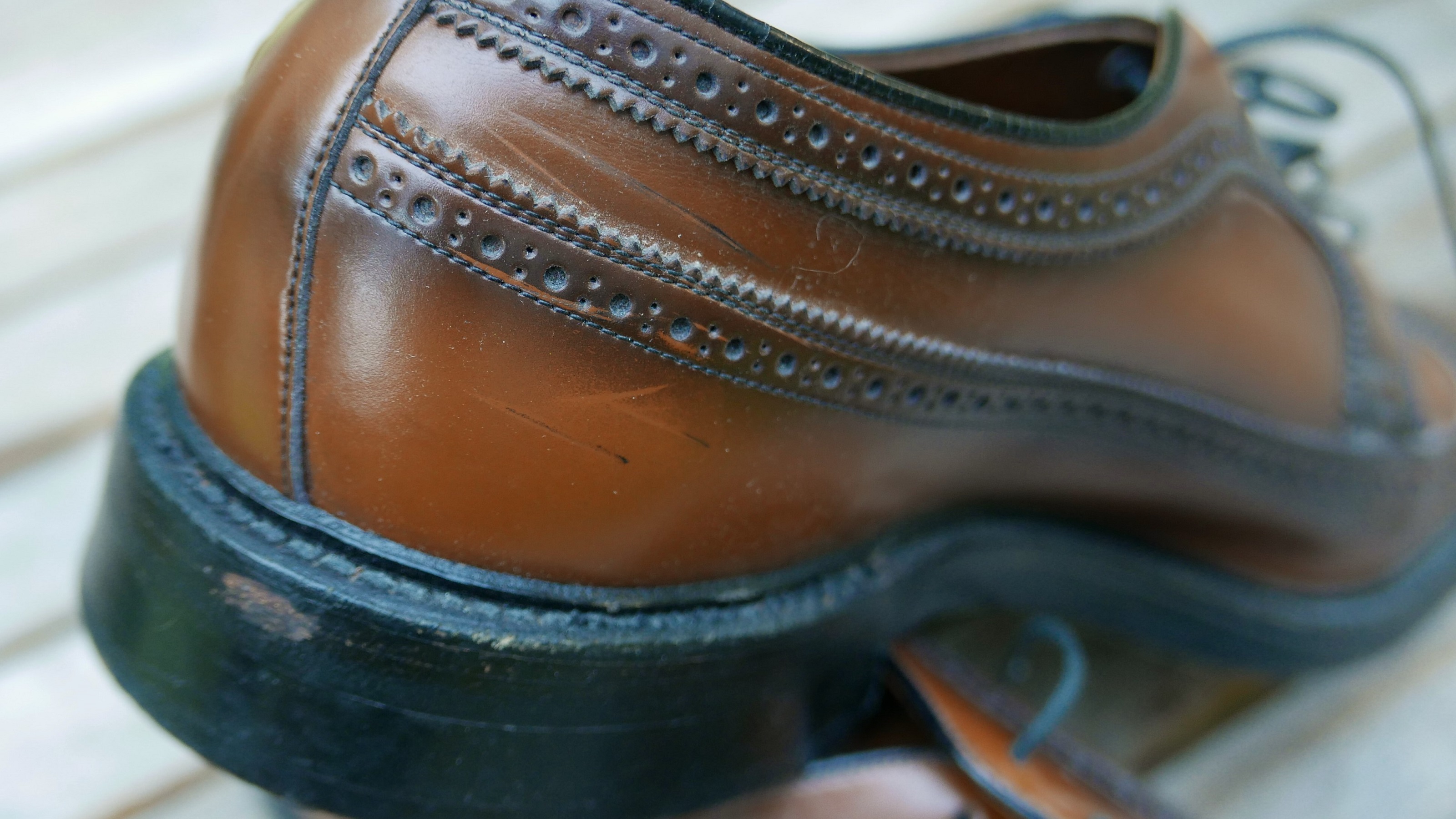 The shoes were well made. The quality of construction and materials was similar to higher end shoes of the period. 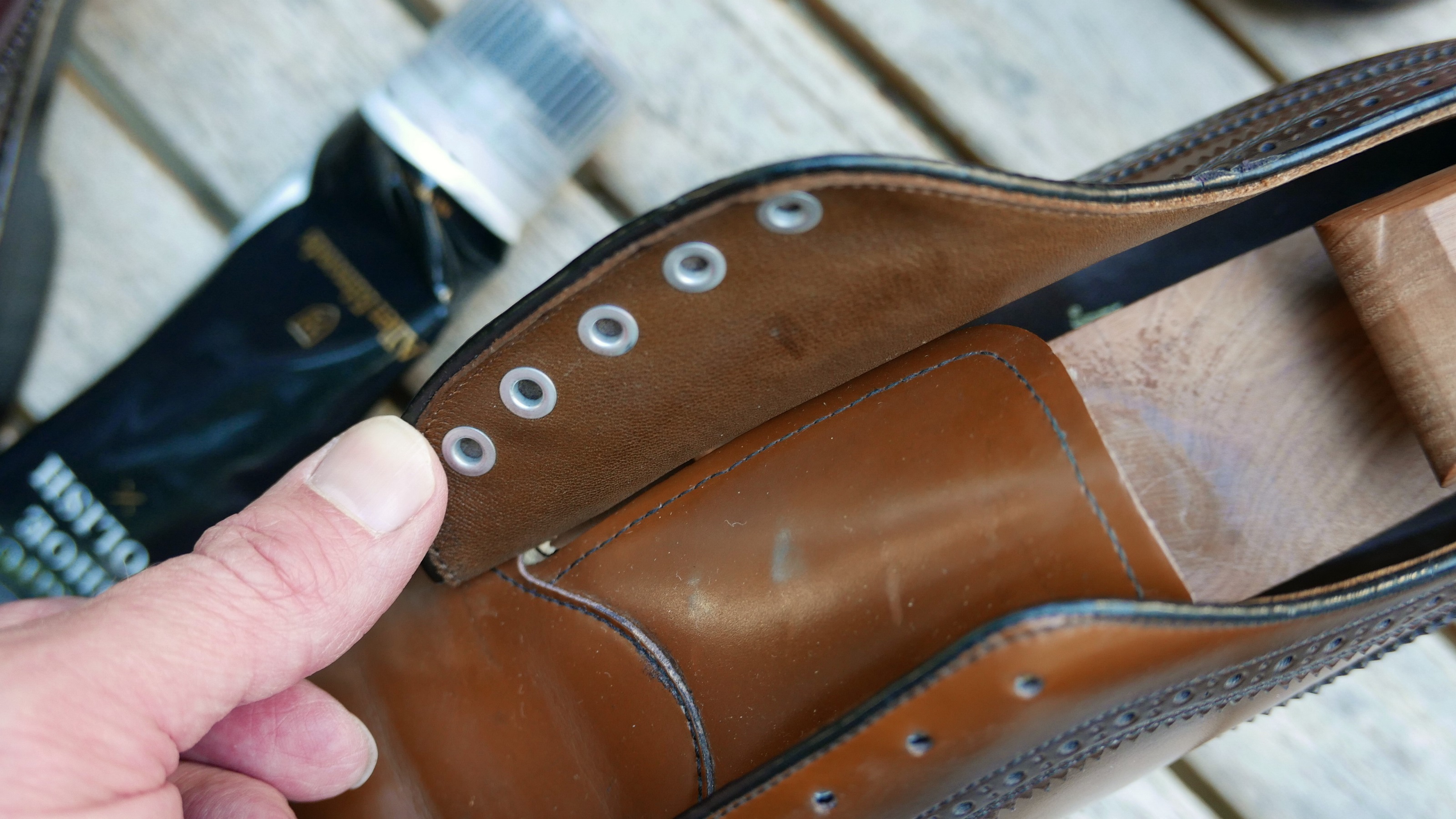 After the shoes were cleaned, I wore the pair a couple times in one week. Honestly, I never liked the look of the upper “leather”, they looked like plastic to me (which they are). I pride myself on my shoes (snobby, I know), but when wearing this Crosby Square pair, I tried not to look down too much.

The shoes fit well and were generally comfortable. They felt already broken in. I didn’t need to put any band-aids on feet at the end of the day. My feet were also never sweaty and the material did actually “breath”. When I first wore the shoes, the top of vamp dug into my foot when flexed. It didn’t hurt but it was noticeable. It was better after a few hours.

Another noticeable difference between Corfam and leather is that the Corfam upper didn’t stretch like leather when worn. It’s hard to describe the difference but it was apparent when wearing them. They always felt a bit stiff. Like you are wearing plastic shoes. 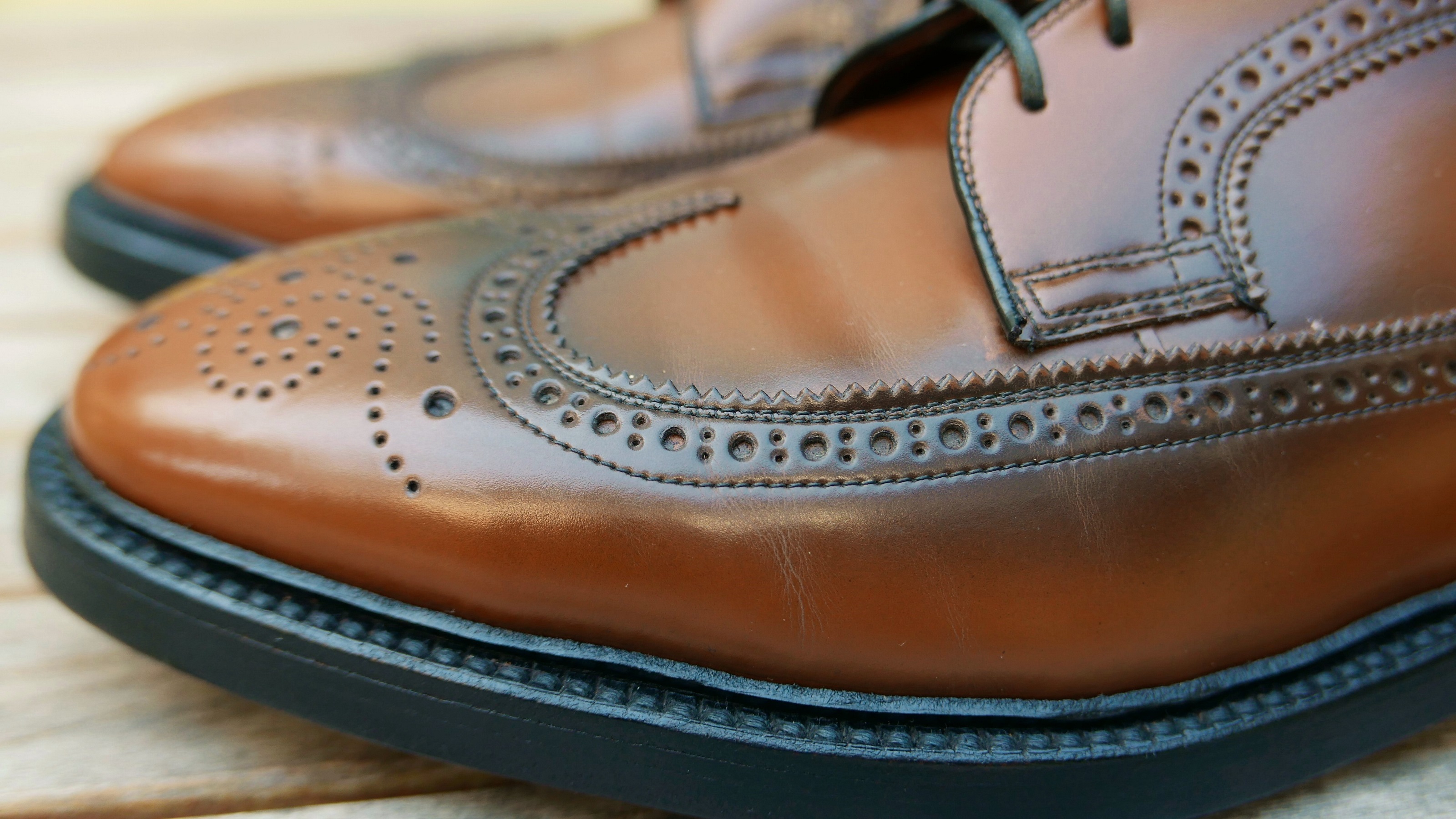 When I did look down on the shoes, the upper color never grew on me. I did like the shape of the shoes. They reminded me of Allen Edmonds 7-Last used in their MacNeil model. I asked one of the stylish women in my office to give an opinion on the shoes (yes, I am that shallow), and she said they looked good to her. She was surprised when I told her that the upper leather was man-made. 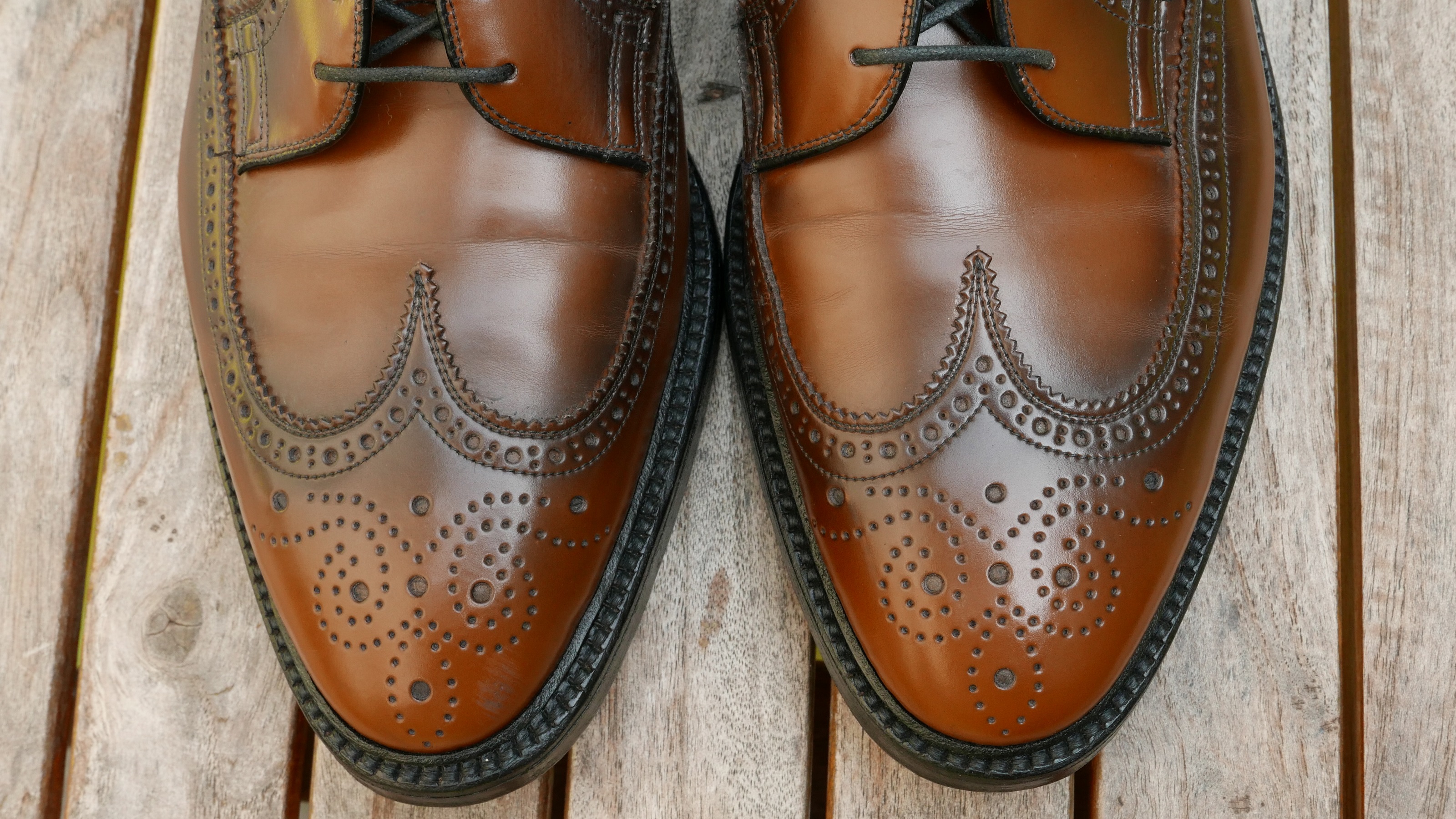 At the end of the day, I had to make the surprising decision of whether to insert shoe trees. Do plastic shoes need them? I ended up using them since much of the shoe was real leather.

Do I recommend you finding and buying a pair of vintage Corfam shoes? No, spend/squander your money on other pairs. I do recommend watching Westworld even though that future will likely never materialize. My belief is that if/when robots come for us, they won’t look like people. And I am certain that they won’t be wearing poromeric shoes. 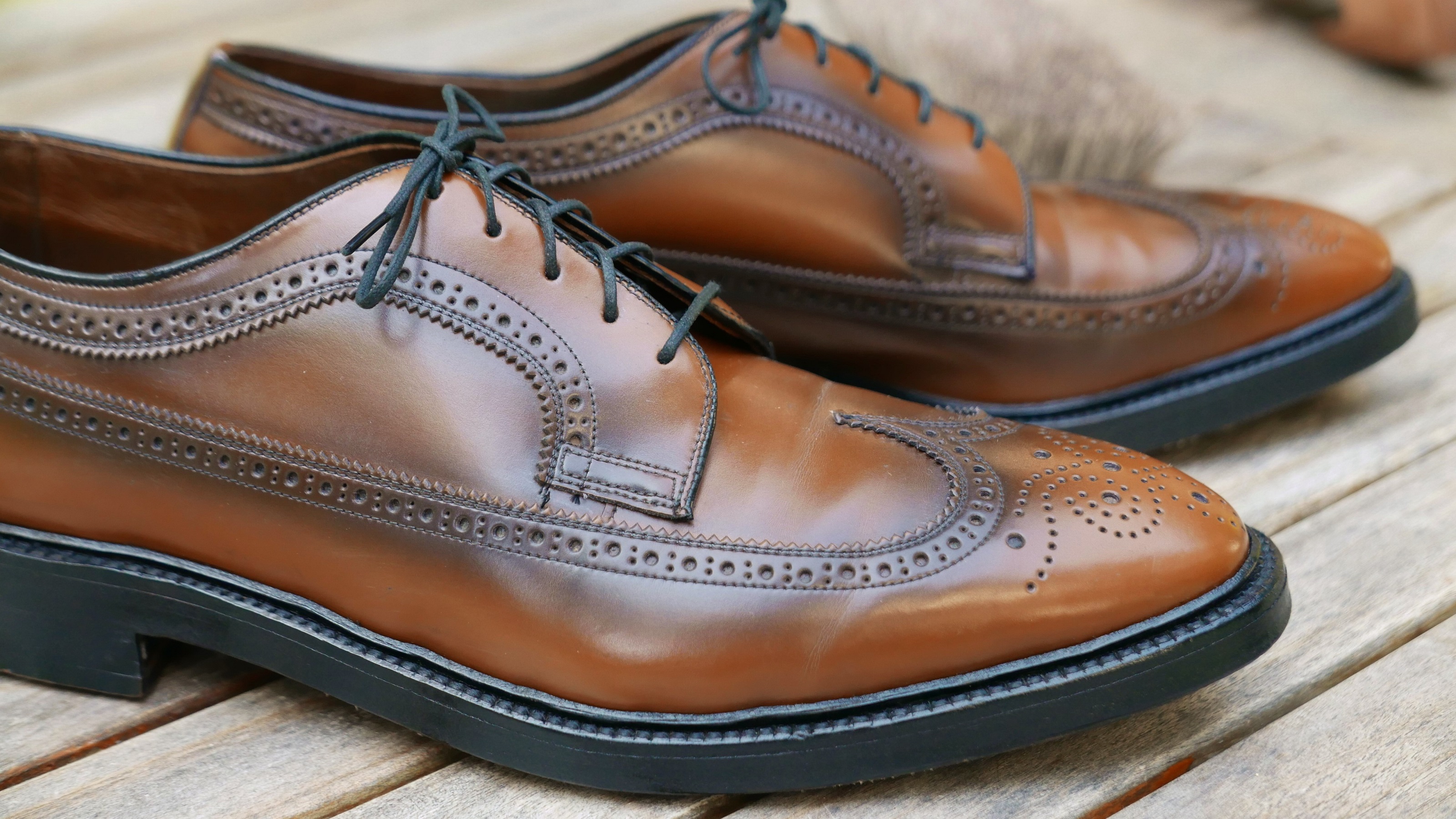 Below are a number of the Corfam ads from the period. 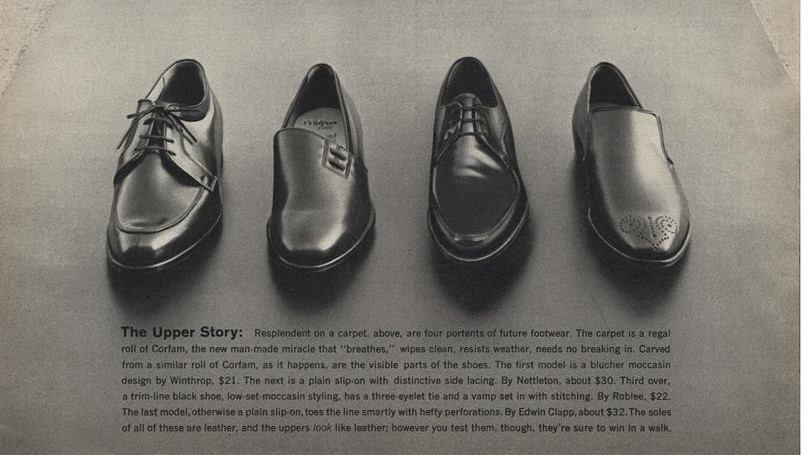 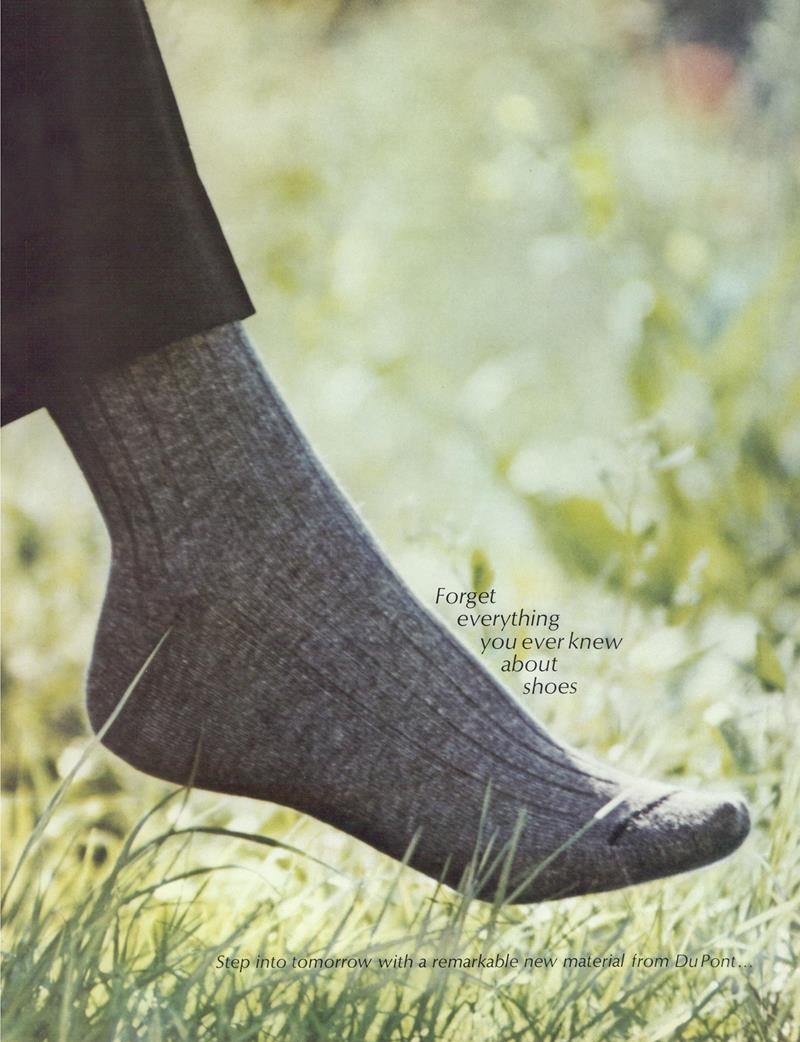 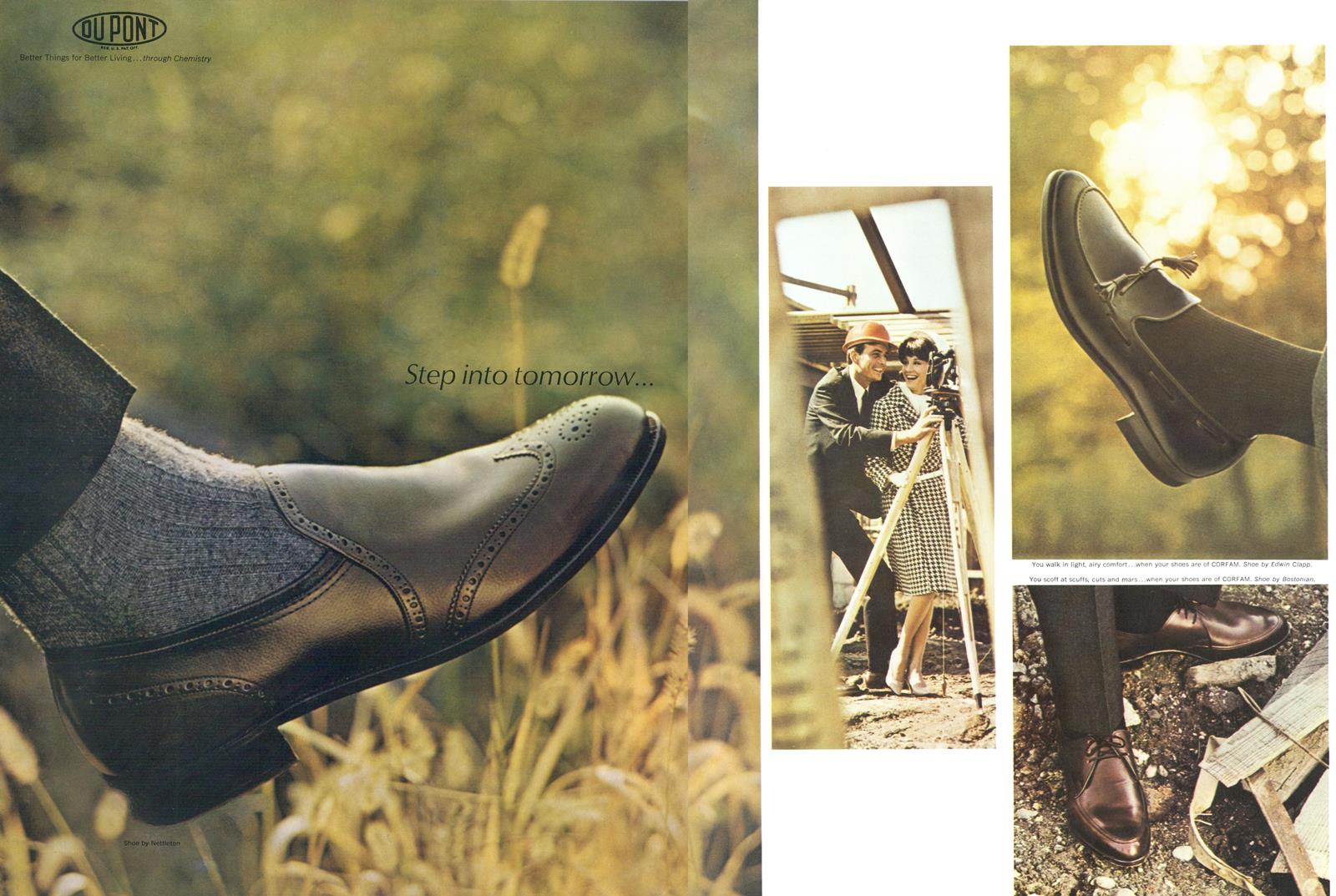 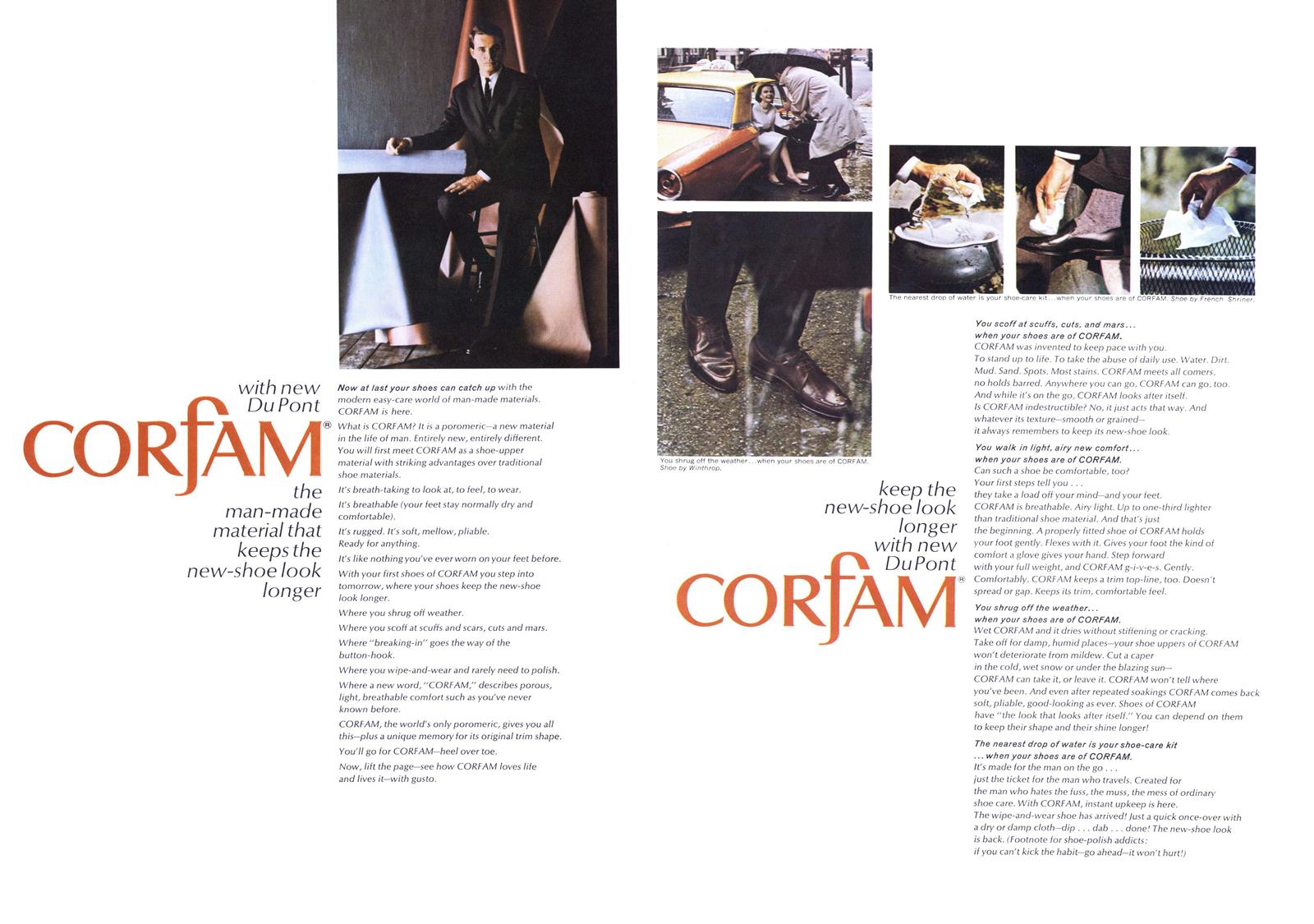 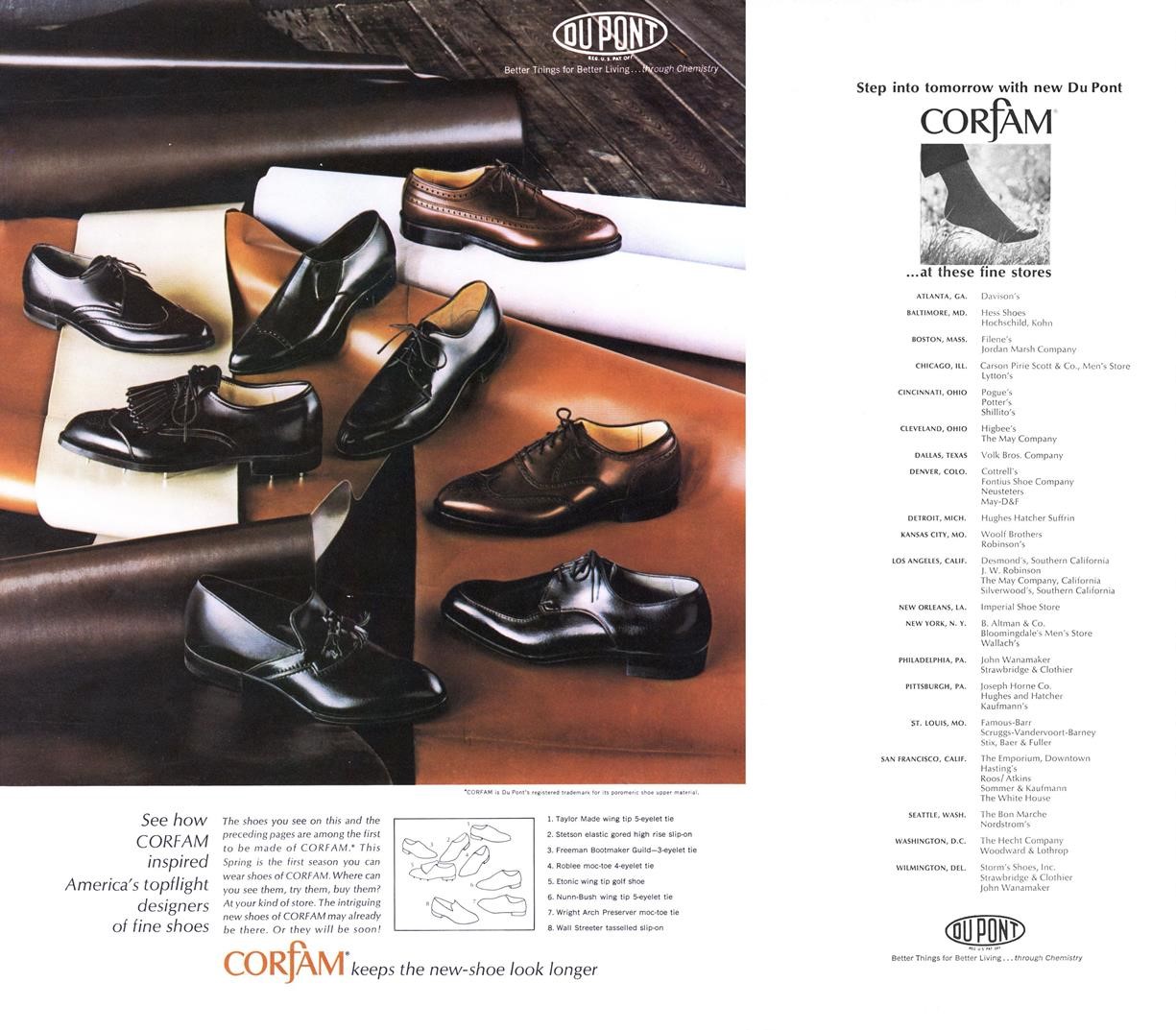 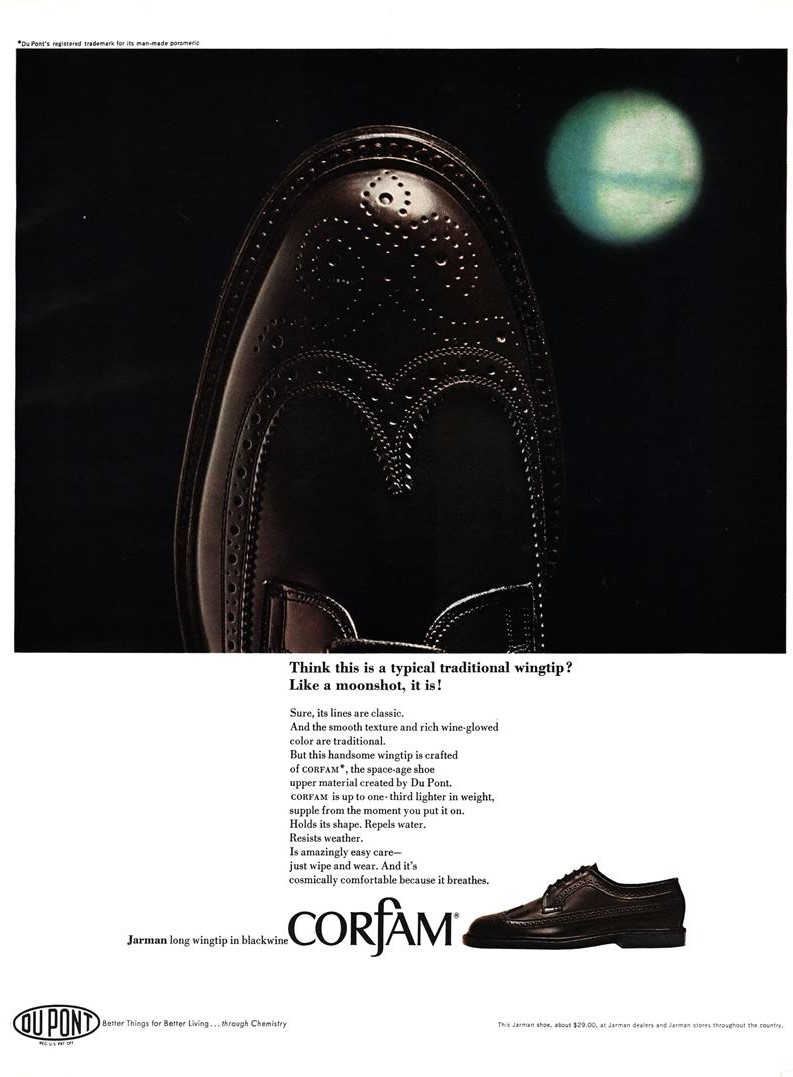 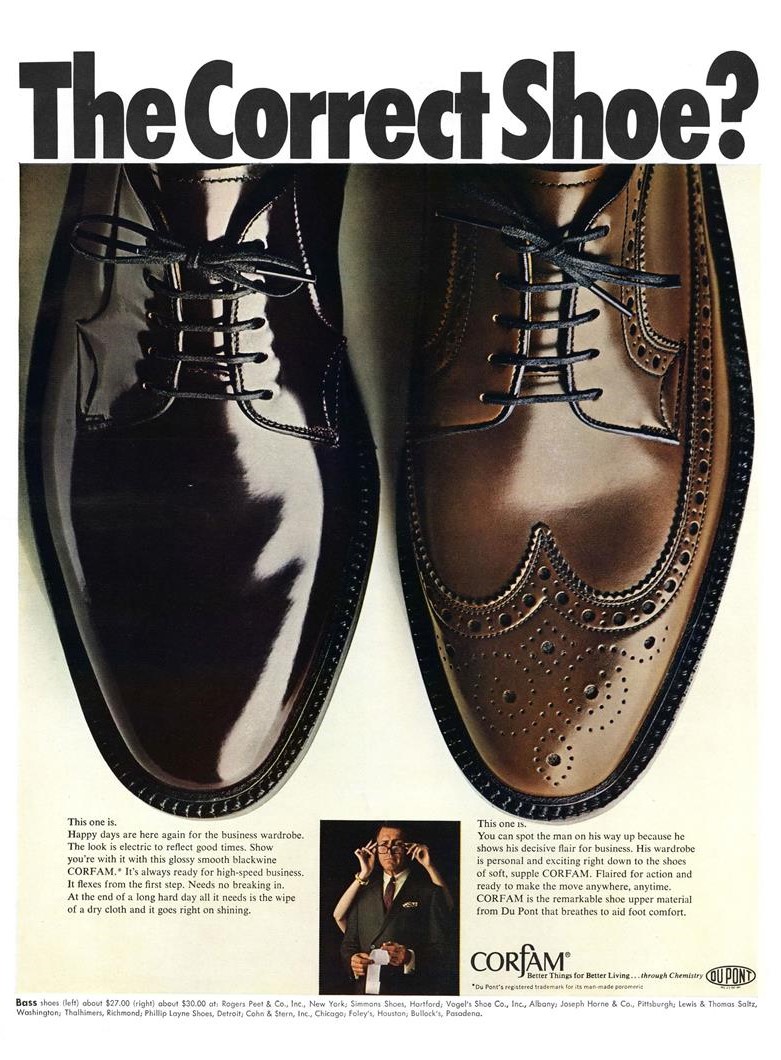 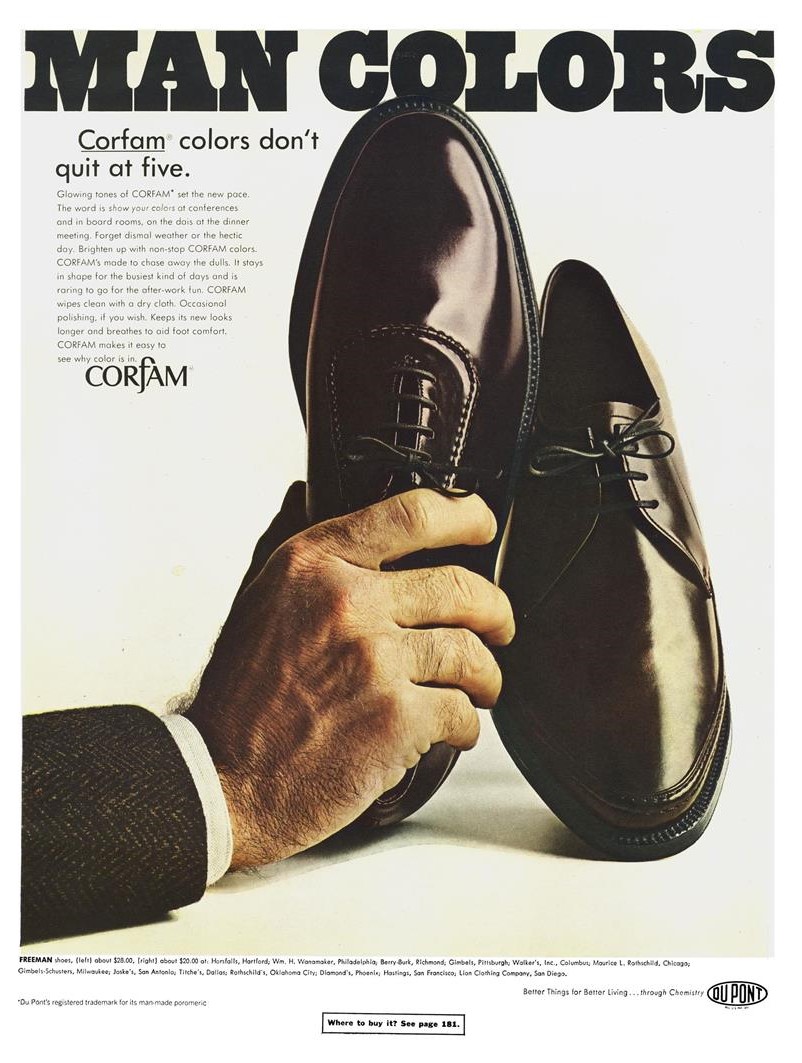 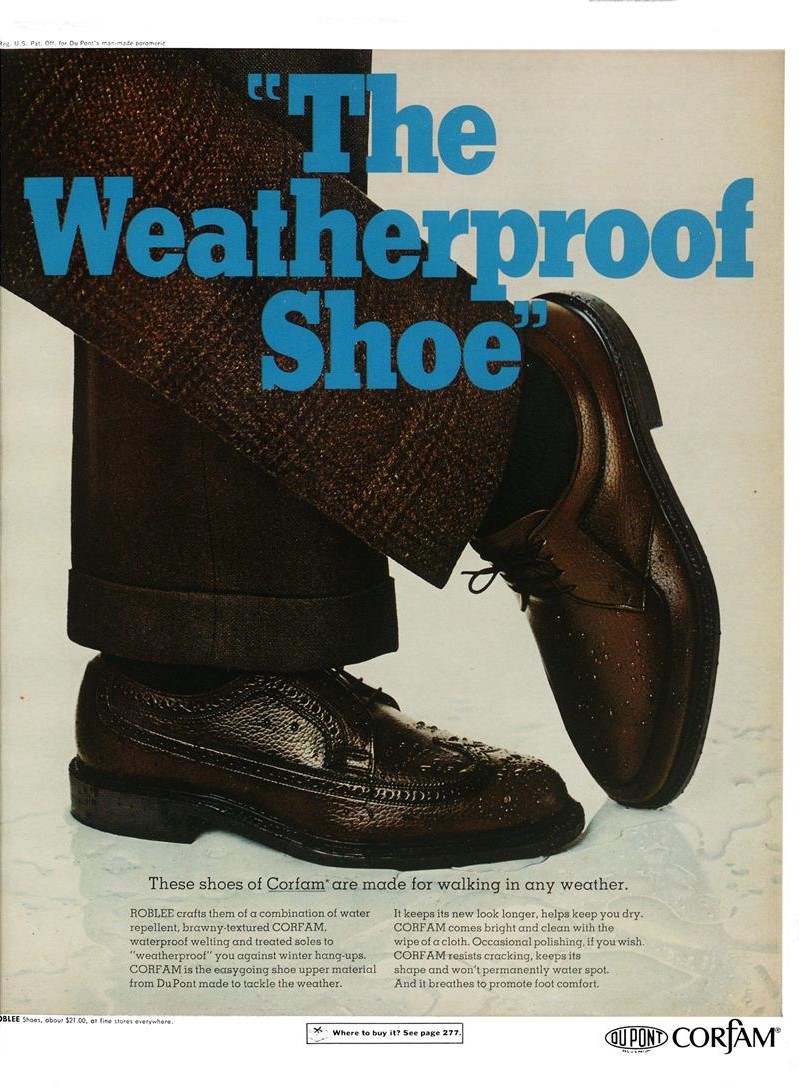