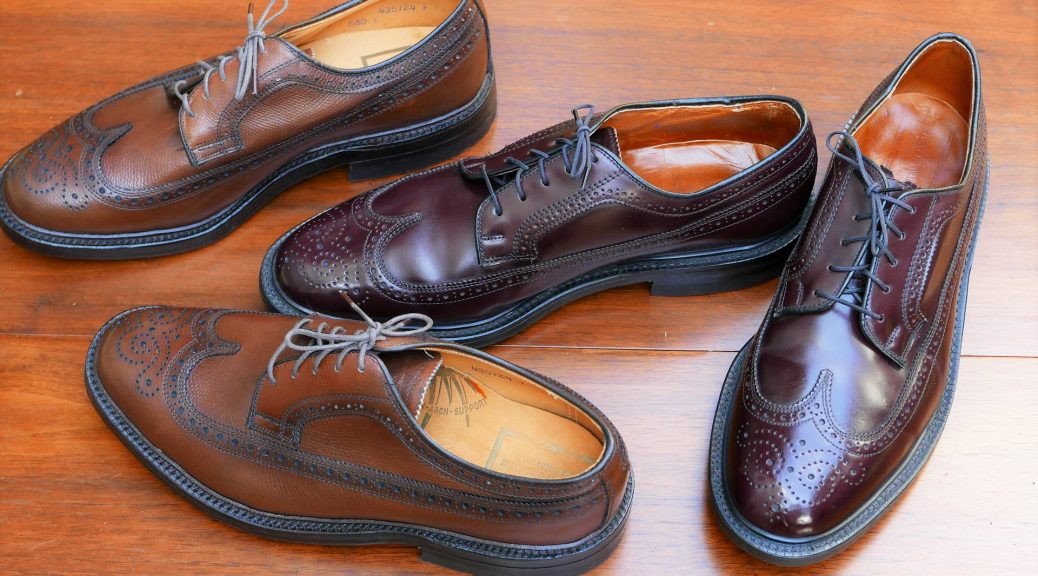 What is convenient about living today is the abundant convenience. We can quickly find and buy items online. You can use your phone to have someone drive you to your destination, watch your dog, or deliver take out from your favorite restaurant. The people driving you around, watching your dog, or delivering your meal are likely doing this to make extra money. You get the food, the restaurant gets your business, and the delivery driver gets a fee plus tip.

If you wanted to make some extra money (moonlight), in the 1960s or 1970s, your options were more limited. Direct sales (“door to door”), was one method where someone could earn additional income. Tupperware, Avon, and Encyclopedia Britannica were examples of direct sales companies. Direct sales had the advantage of allowing you to set your own hours and you could work as much as you wanted.

There were a number of shoe companies, including Mason and Hanover, that used direct sales to distribute their products. Salem, Virginia based Stuart McGuire was another large company that sold shoes and clothes through its network of “representatives”. The representatives were armed with the Stuart McGuire catalog which boasted as having the “world’s largest collection of shoes” and it included dress shoes, work boots, sandals and sneakers. 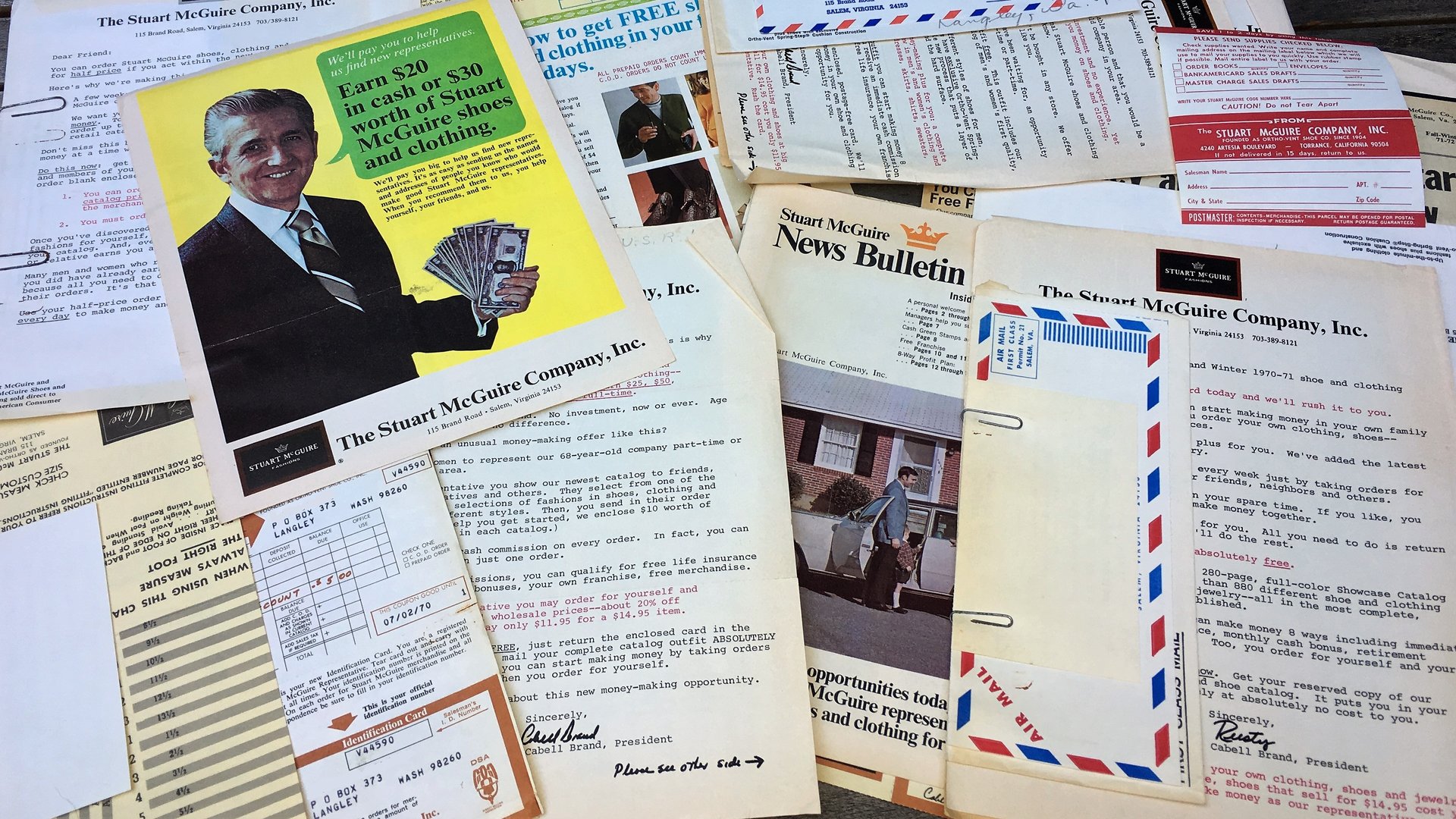 I have a 1971 Stuart McGuire catalog and marketing materials from the era. In 1971, shoe prices generally ranged from $25 to $35. For around $50, you could get shoes or loafers made with exotic leathers such as elephant (yes), sea lion, alligator, and sharkskin. The exotic leather pairs were made in England by, I believe, Loake.

If you look for vintage shoes on eBay, you have likely come across Stuart McGuire pairs. In general, they tend to be lower quality and often with brown painted vinyl soles. I have collected a few pairs of Stuart McGuire from their “Imperial” line. One in alpine grain and the other in Shell Cordovan. The alpine grain was priced at $35.95 which is the equivalent of $230 in 2019 US dollars. I don’t have a price for the Shell Cordovan model. 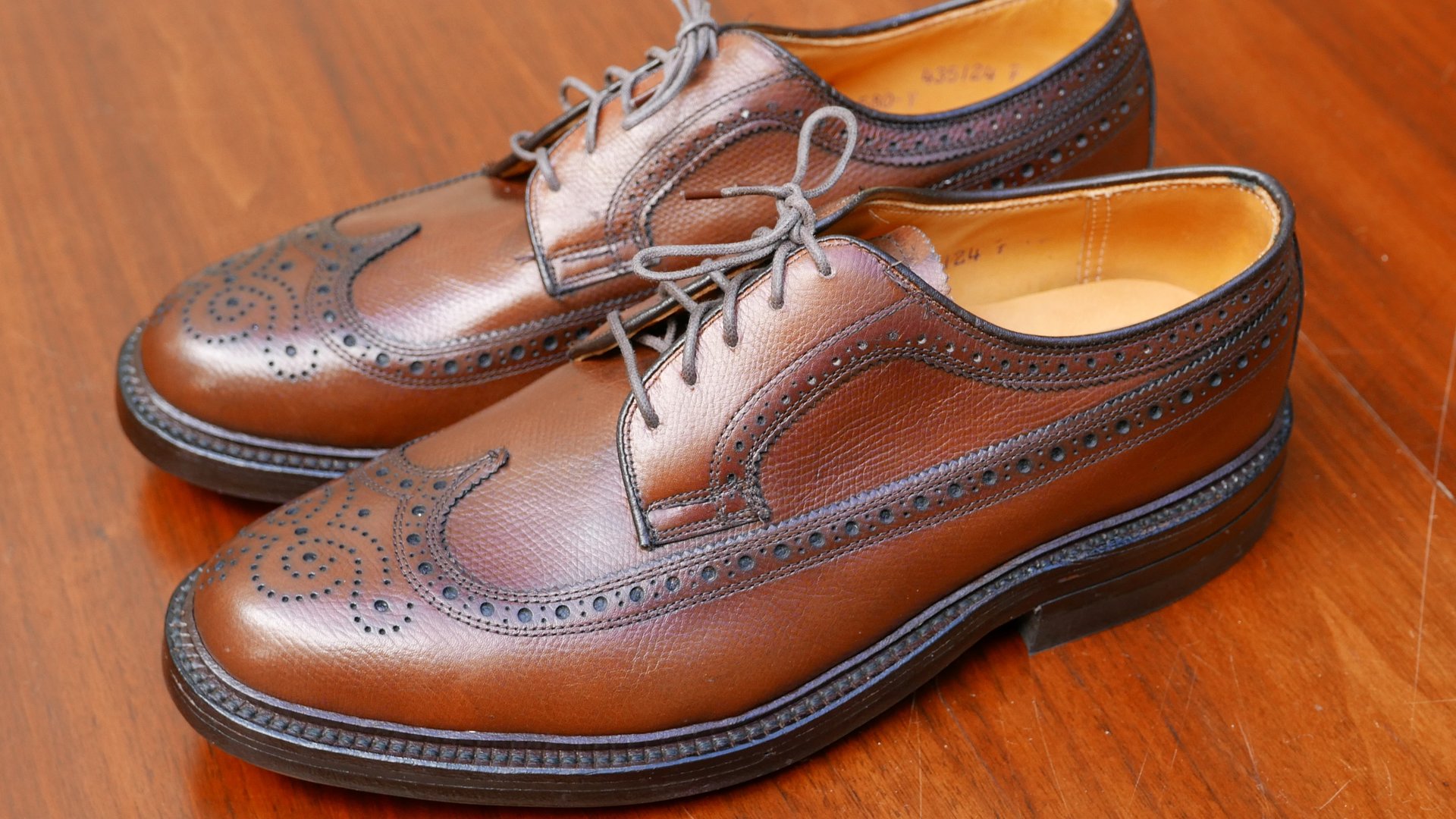 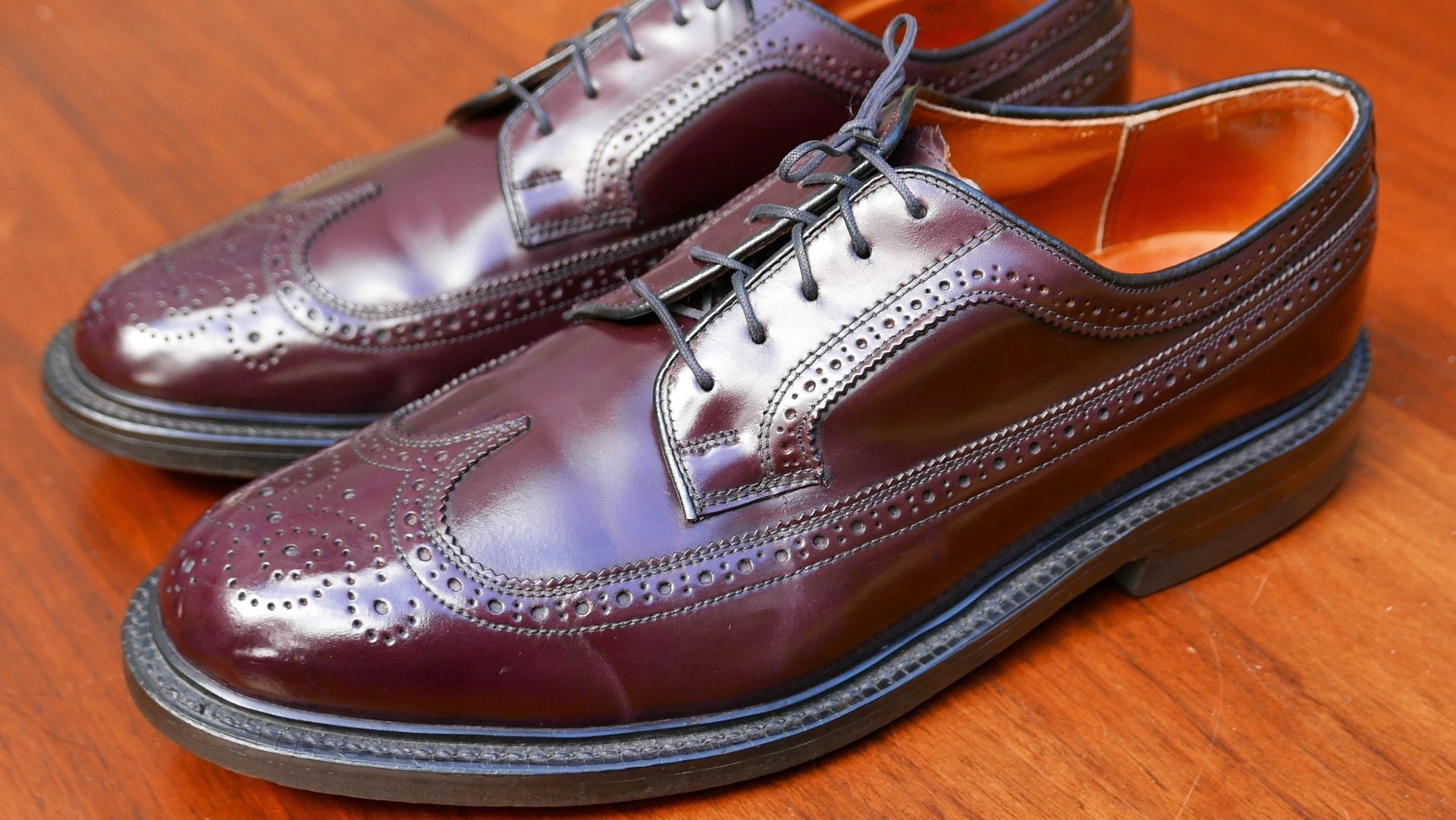 The alpine grain Imperial (model 580), is a lesser shoe compared to a 1971 Florsheim Imperial or a Hanover LB Sheppard. The upper leather is thin and has a plastic like feel. Both toe medallions are widely off center. The outsole is lower grade leather. On the positive side, the insole and leather lining are nice. 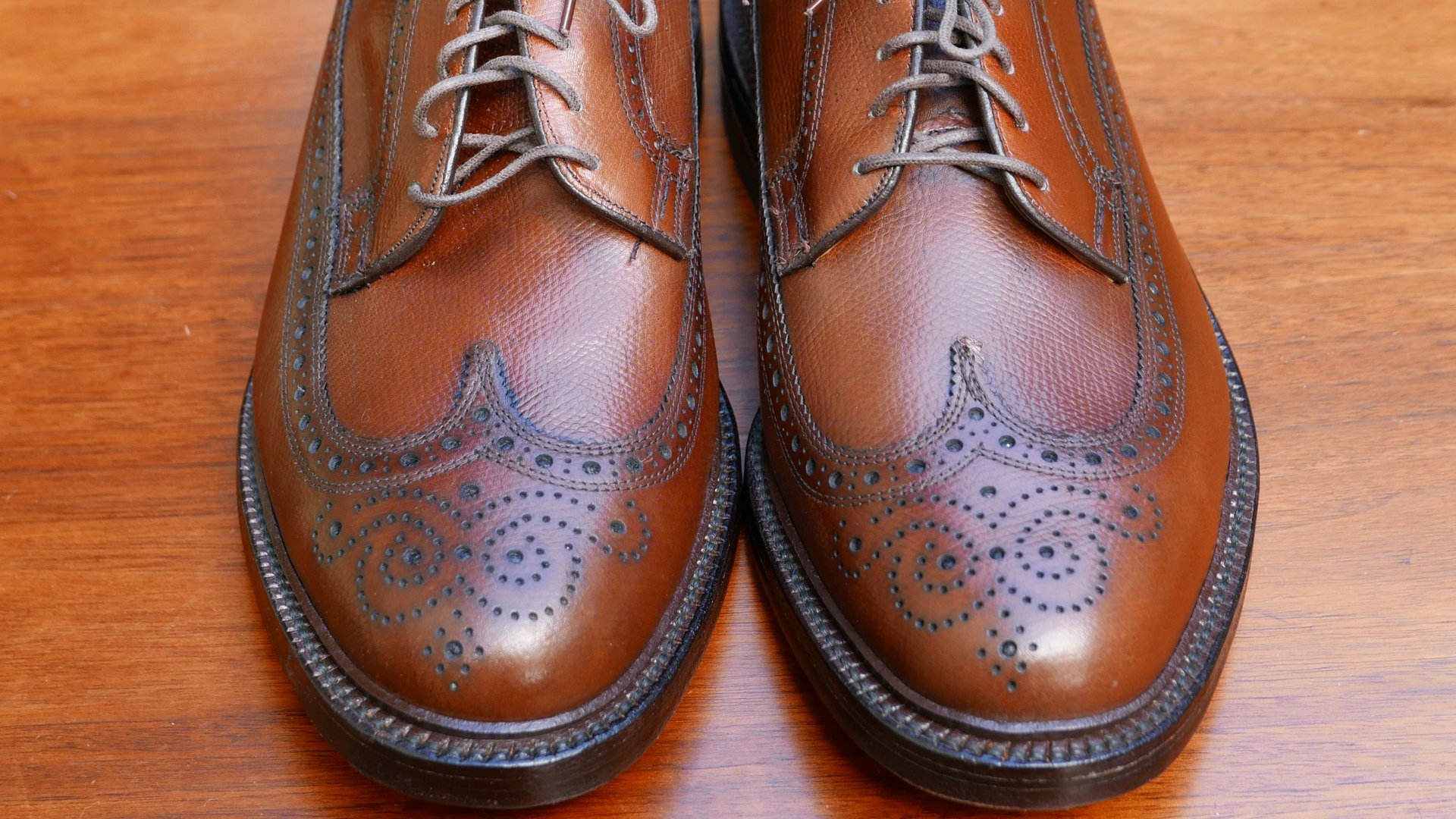 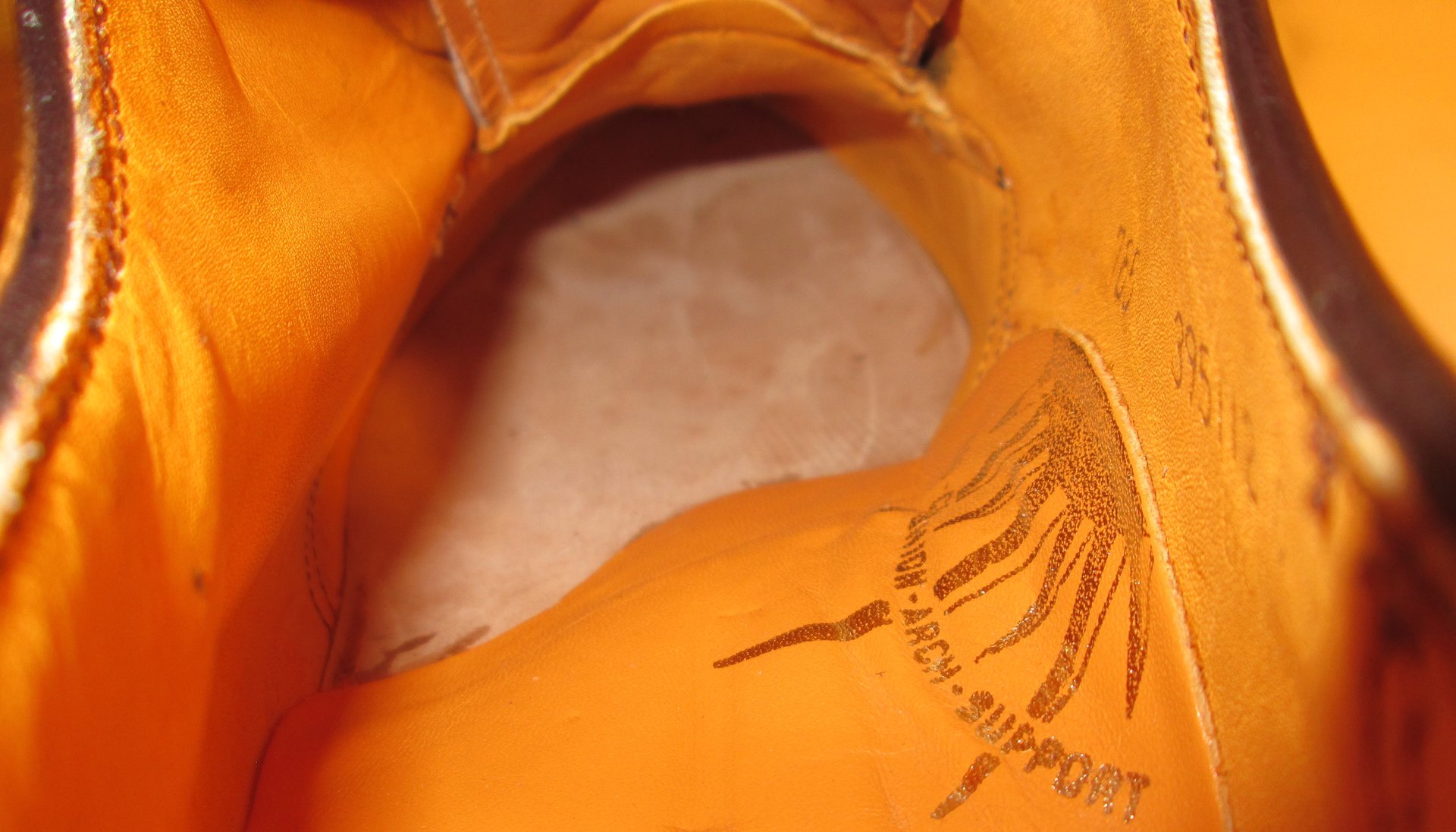 The Shell Cordovan model (419-T), appears to have been made at another plant or factory. The stitching is nice but it has a vinyl welt. I have had many Shell Cordovan shoes and this Shell is different in its color and feel. I don’t believe it was made by Horween Leather Co. In the photo below, the vamp is a bit rough. Shell Cordovan leather is also made by other manufacturers in Japan and Europe.

The shoes are too small for me so I can’t say how they wear. 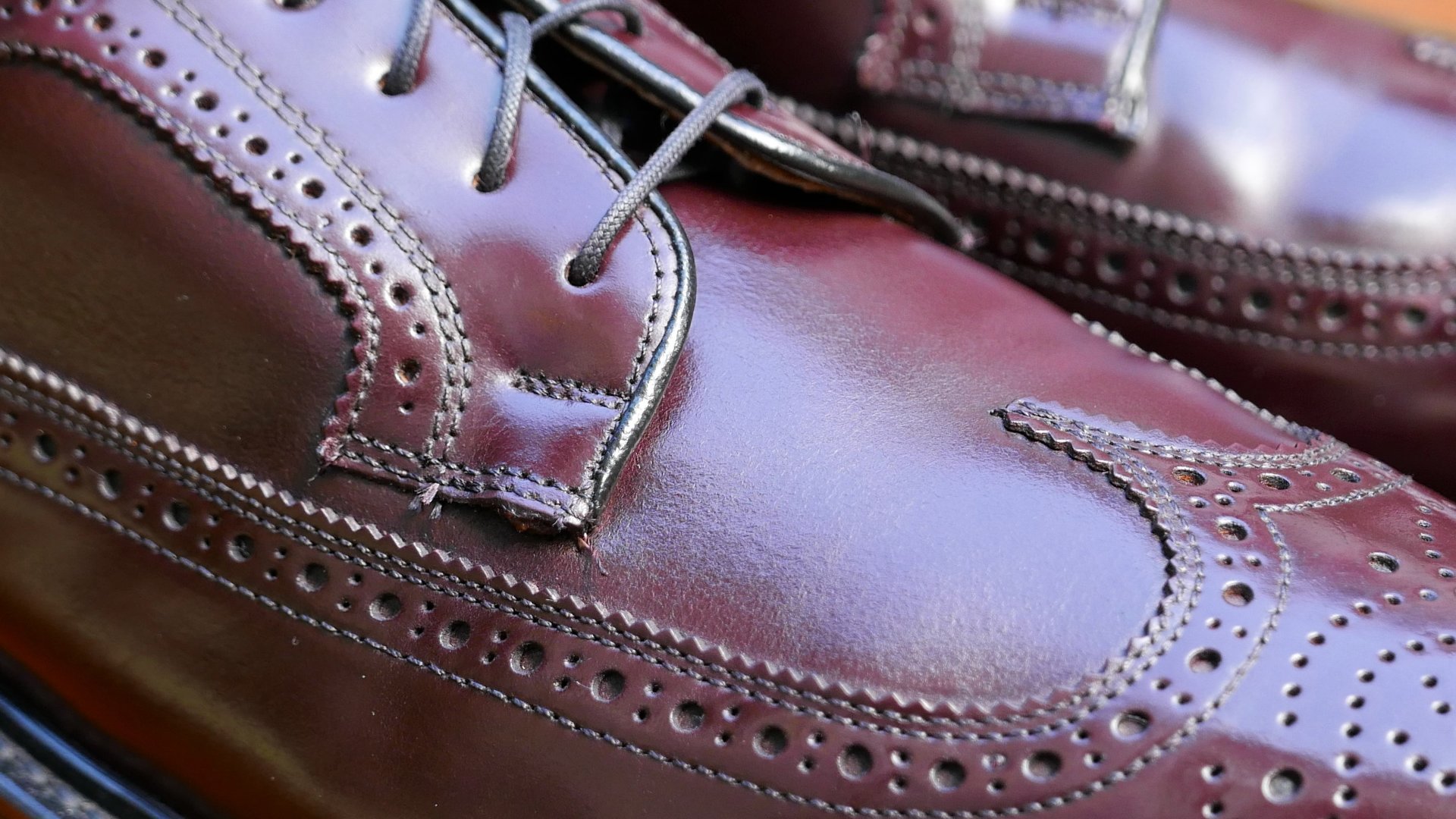 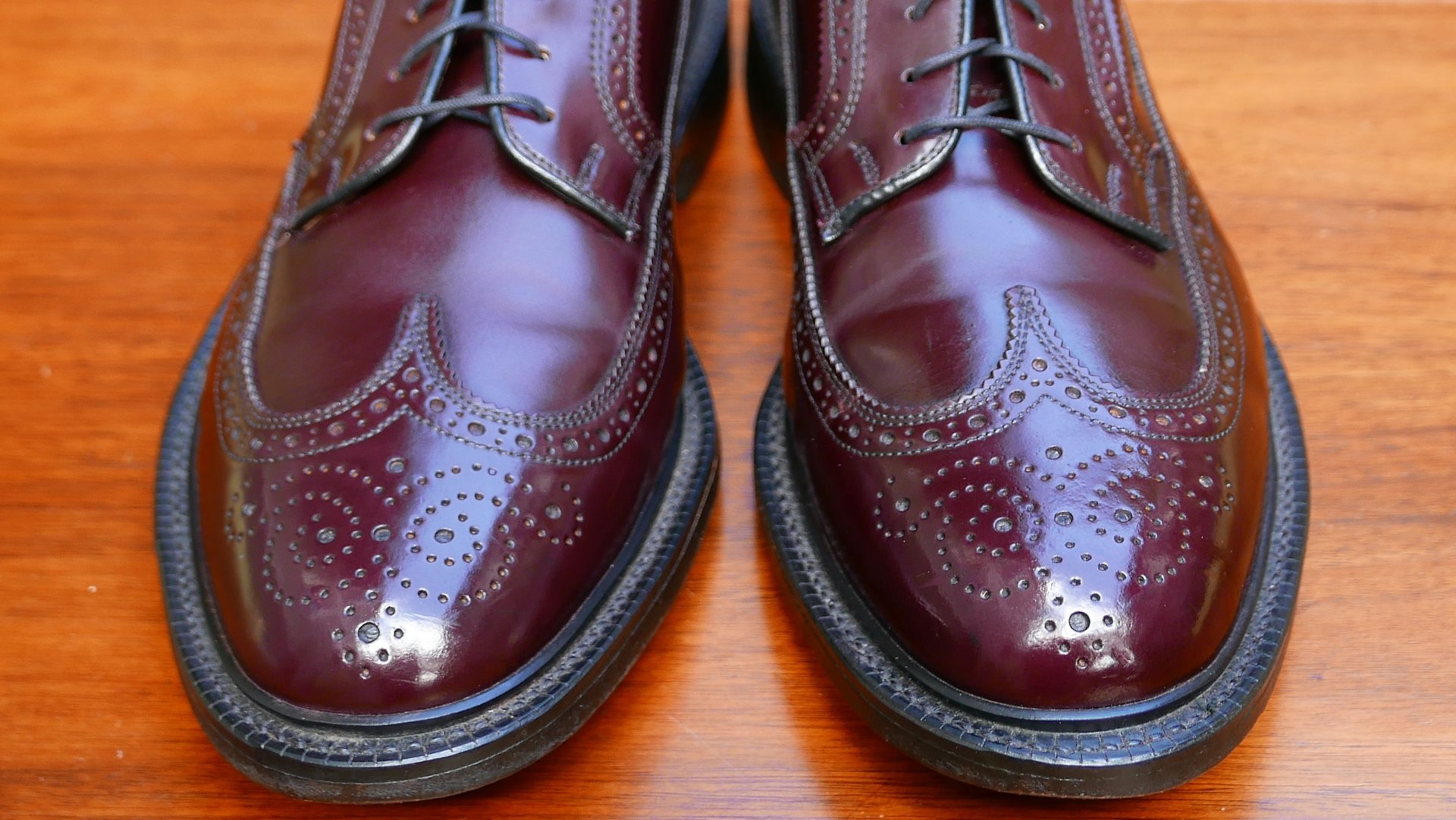 The Stuart McGuire catalog emphasized that the shoes were made with “Ortho-Vent Spring-Step”. Instead of cork, foam cushion was used. Stuart McGuire states that “it puts a layer of airform cushion between the insole and the outsole. Millions of tiny air bubbles separate your foot and the hard surface.” Why is this better than cork? The marketing explains that in other welted shoes, “there is a layer of asphalt and cork filler between the insole and outsole. (It’s like slipping a piece of tile in your shoes)”. Ouch. I haven’t come across any shoes using asphalt in their construction, but I could be missing something. 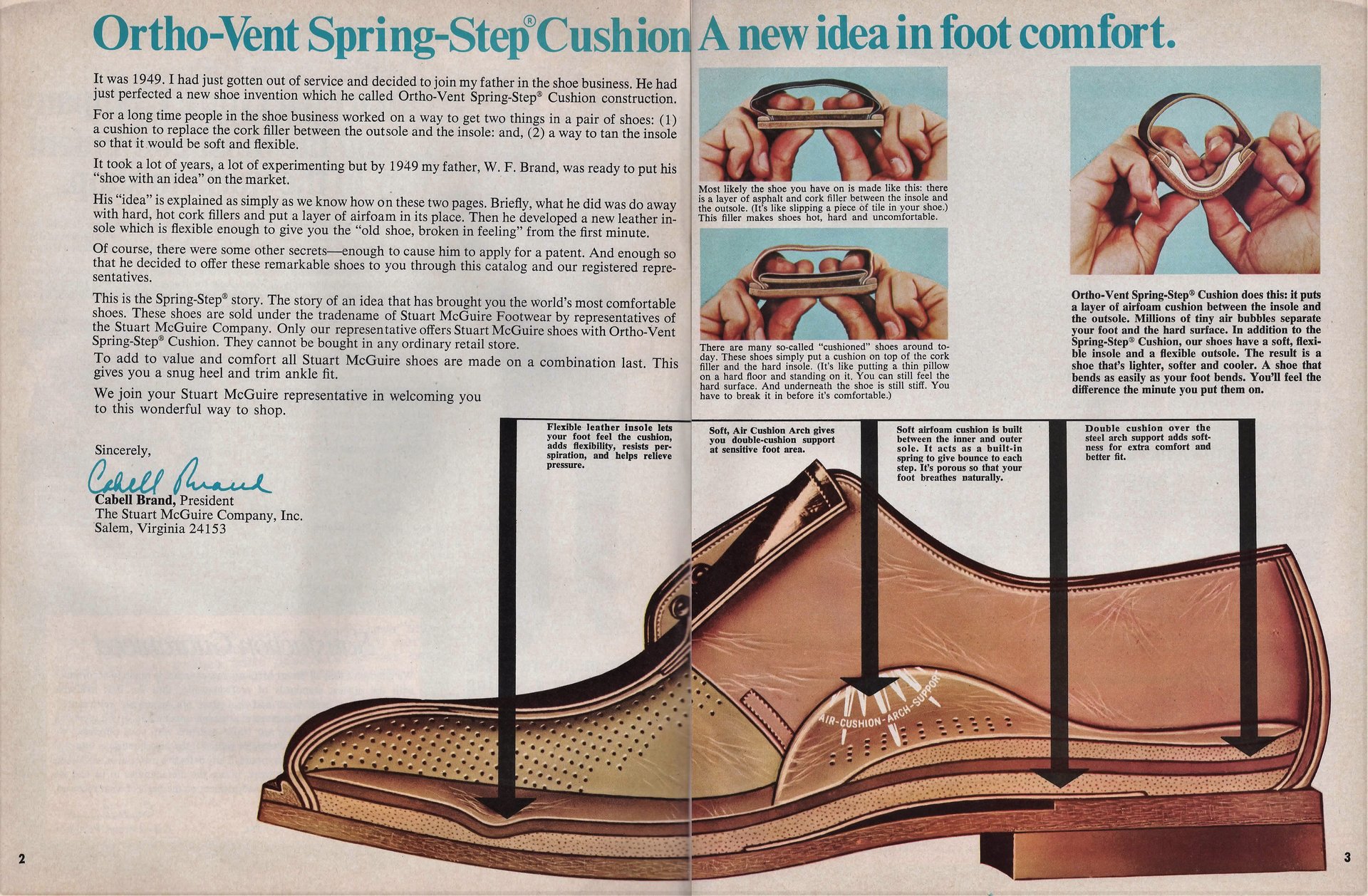 Compared to other direct sales companies, the Stuart McGuire sales model had some advantages, namely salesmen immediately kept a portion of each sale (usually 20%). Hanover, for example, had a more complicated commission structure based on a variety of measures. The commission for the representative is encoded and displayed under the price for each item. The “DEP700” value displayed in the catalog page below indicates that the commission on the pair is $7.00. 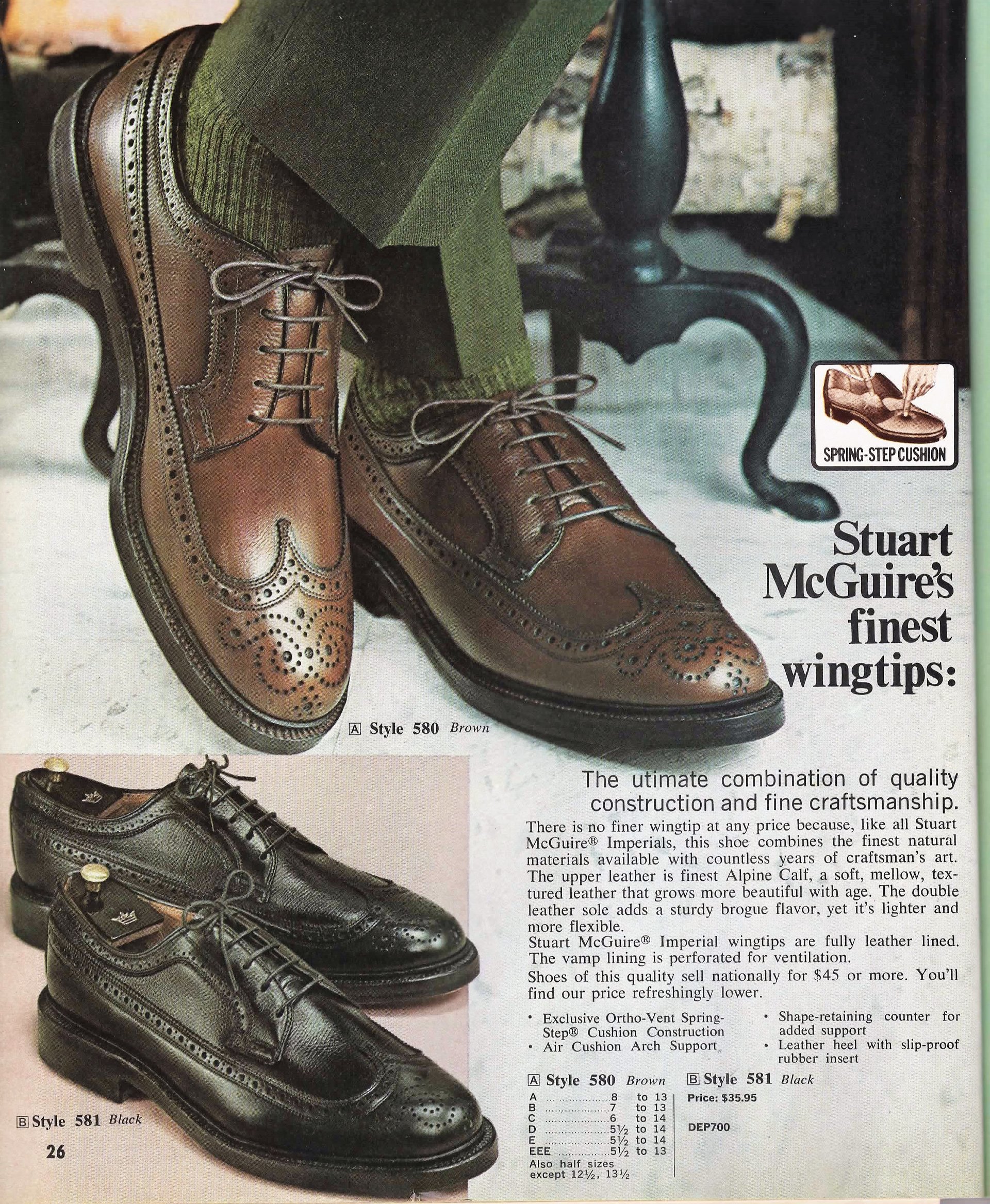 “YOU CAN MAKE MONEY by letting your friends, neighbors, relatives, and others order from your catalog. You can earn an immediate cash commission on every order you send in for someone else. It’s easy to make $25, $50, $100 or more in just a few free hours a week.” Which sounds good unless you are the representative’s friends, neighbors, relatives or other. It might have made for some awkward Thanksgiving dinners. But the sales model must have been successful given how common it was.

The 266 page 1971 Stuart McGuire catalog is impressive. It is high quality and similar in layout to the Sears catalog. It must have been expensive to produce. There are over 500 models of men’s and women’s shoes. People could look through the catalog and then have their representative make the order. No need for someone to sit in your living room while a salesman took you through his catalog.

In addition to shoes, the 1971 catalog listed men’s and women’s clothing. The men’s clothes were full of dubious fashion choices. Page after page. Pirate and medieval inspired styles. Maybe I needed to live through the period to understand it all. 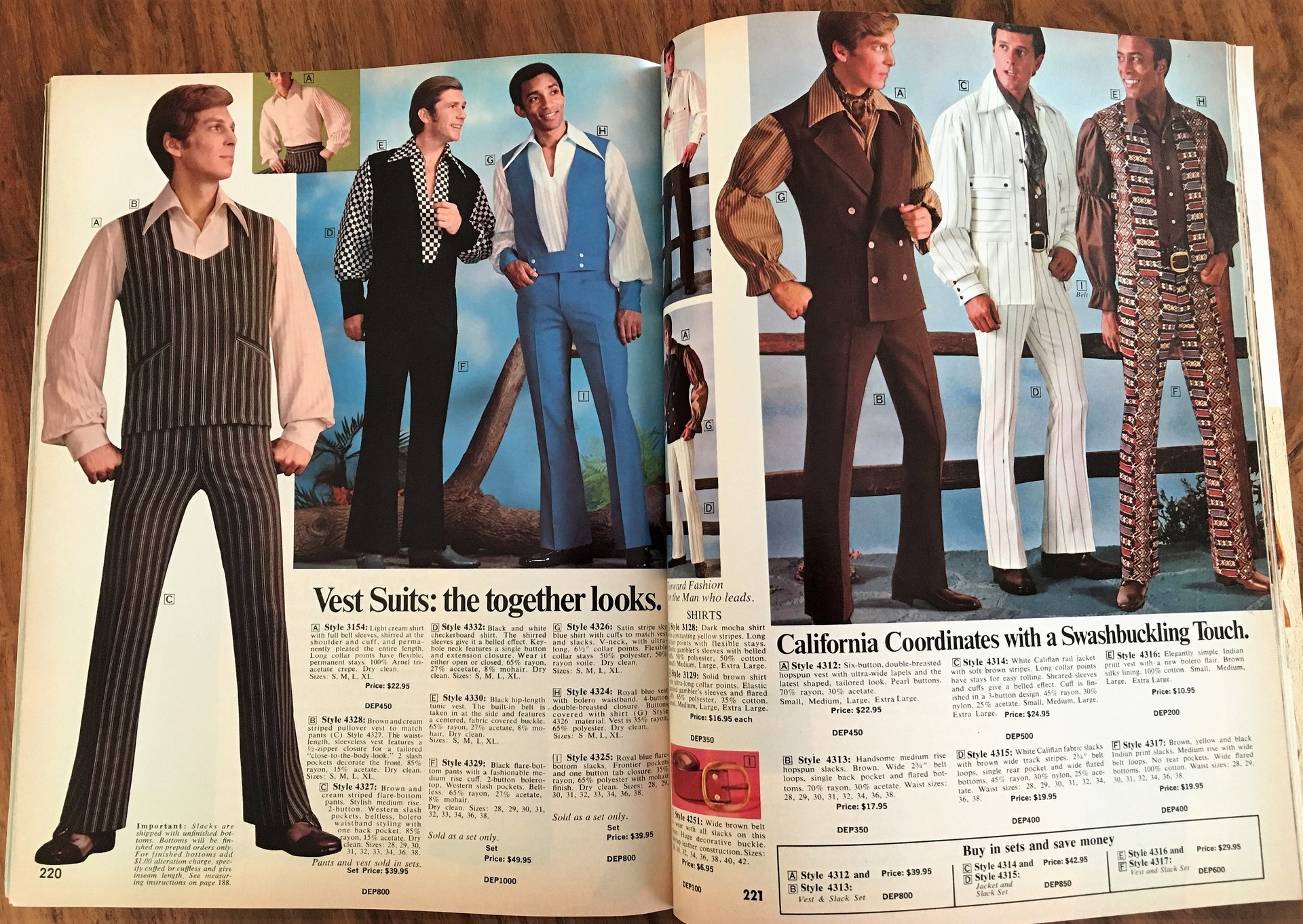 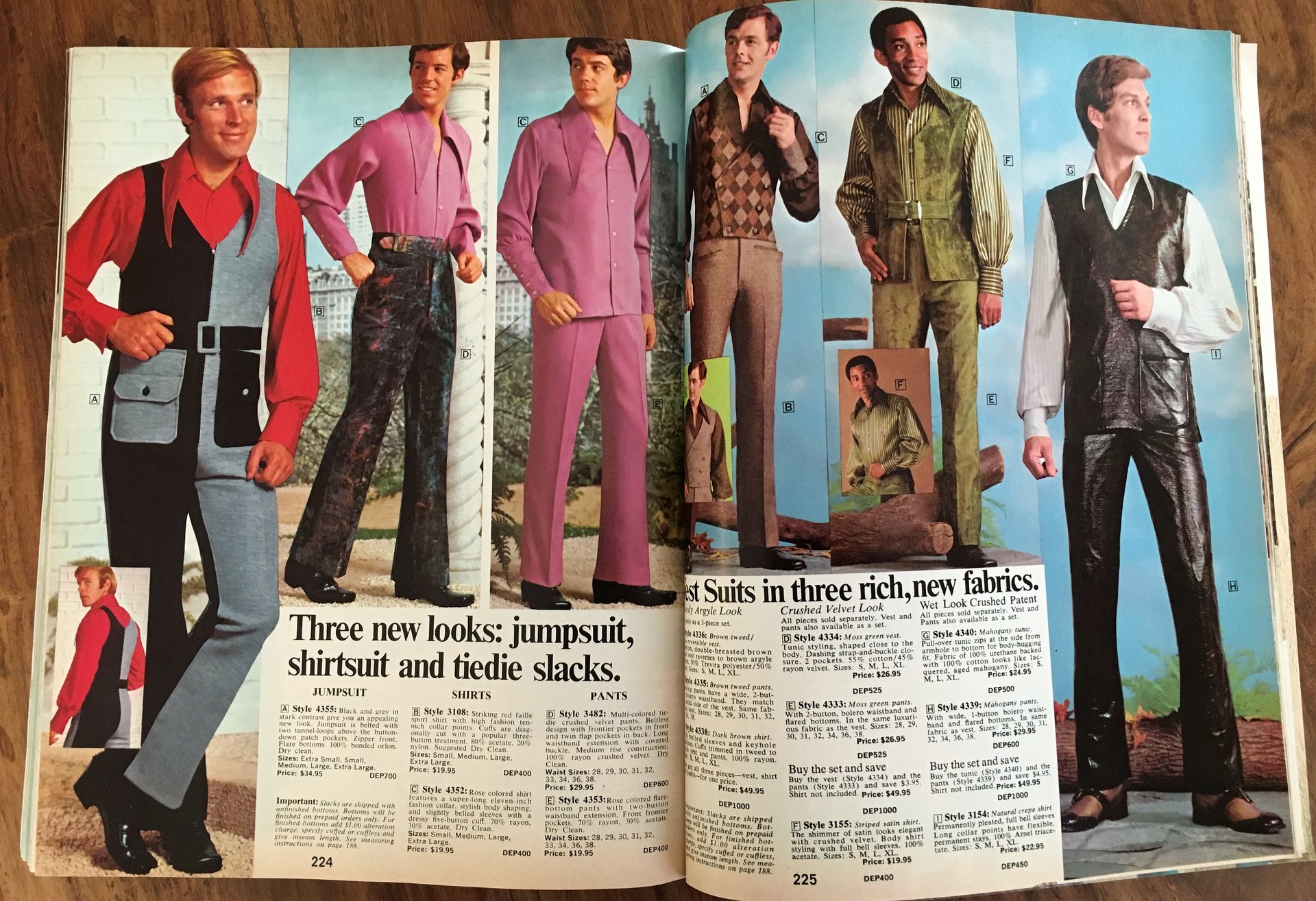 One interesting item about the catalog is that there are no phone numbers listed. All business was conducted via US mail. Have a problem? Send a letter. Things were slower in 1971.

Stuart McGuire continued into the 1980s. In the later years, the emphasis was more on catalog sales and telemarketing than on individual representatives. The company was acquired by Home Shopping Network in 1986 for $18 million. HSN continued to operate the business until 1995 when it basically sold the Stuart McGuire name to Mason. The Salem, Virginia facilities were closed that year, and all operations were moved to Chippewa Falls, Wisconsin. Mason no longer markets Stuart McGuire merchandise.

In researching Stuart McGuire, much of the information focused on its founder and President, Cabell “Rusty” Brand. Cabell Brand was a World War II veteran who in 1962 took over as President of the family business, Ortho-Vent Shoes. Brand renamed the company to a more consumer friendly name, Stuart McGuire and expanded the business with this successful direct sales model. He was a well-regarded and highly connected individual who spent much of his life as an advocate for reducing poverty, improving education, civil rights and environmental awareness. He died in 2015. I read much of a 2010 book he wrote and he was a passionate activist for the betterment of people all the way to the end.

Enjoy a few more photos below. 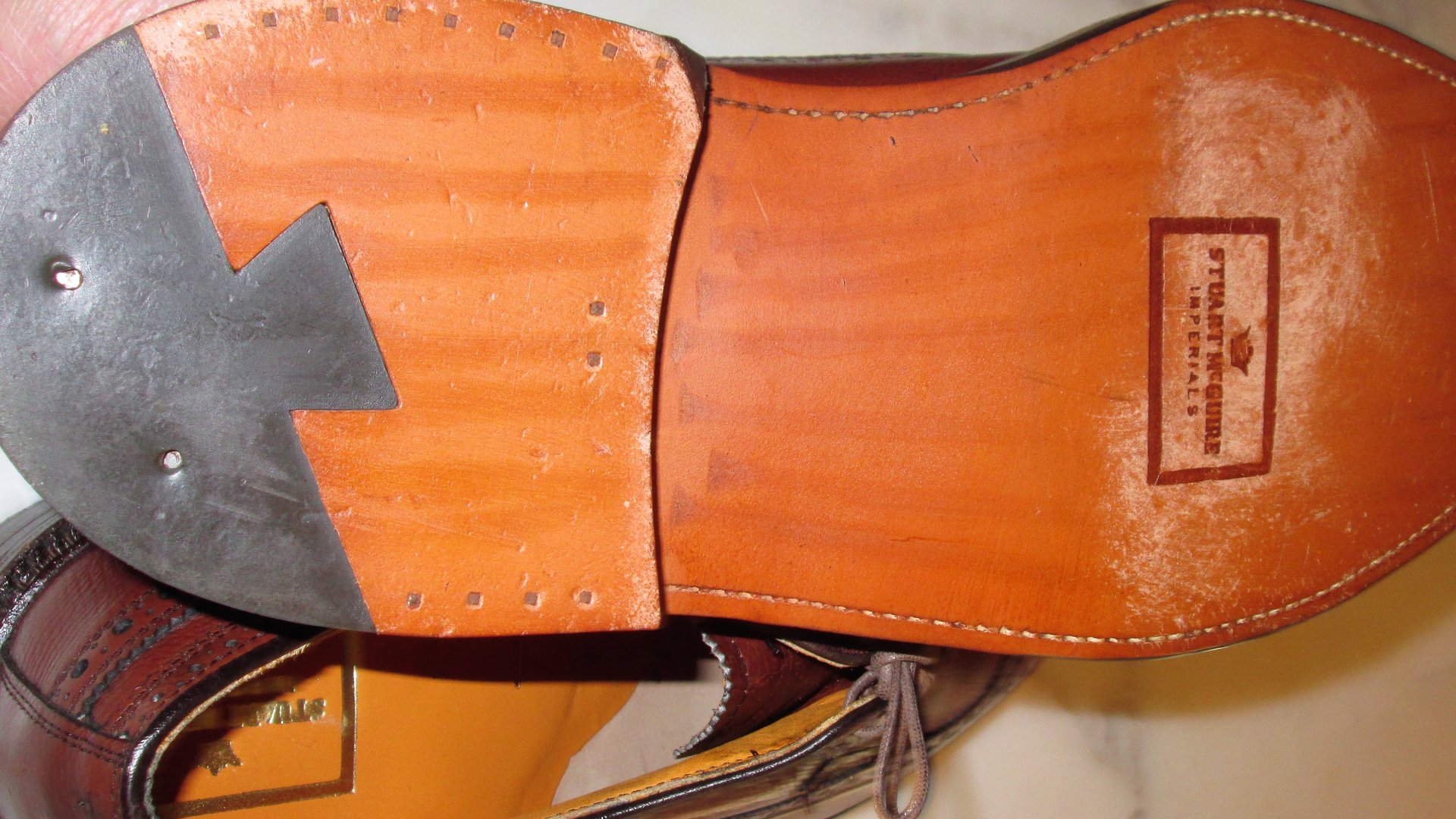 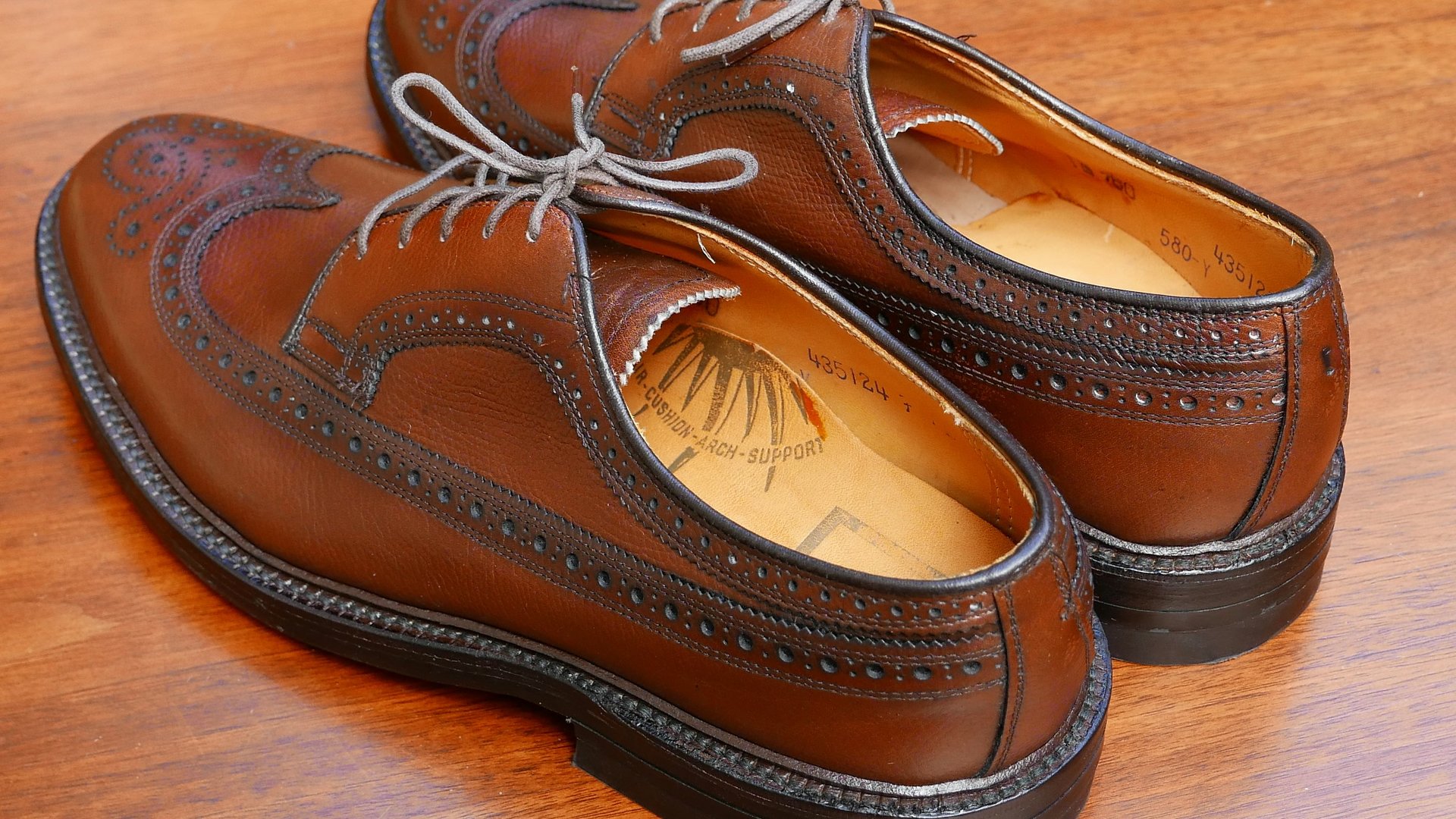 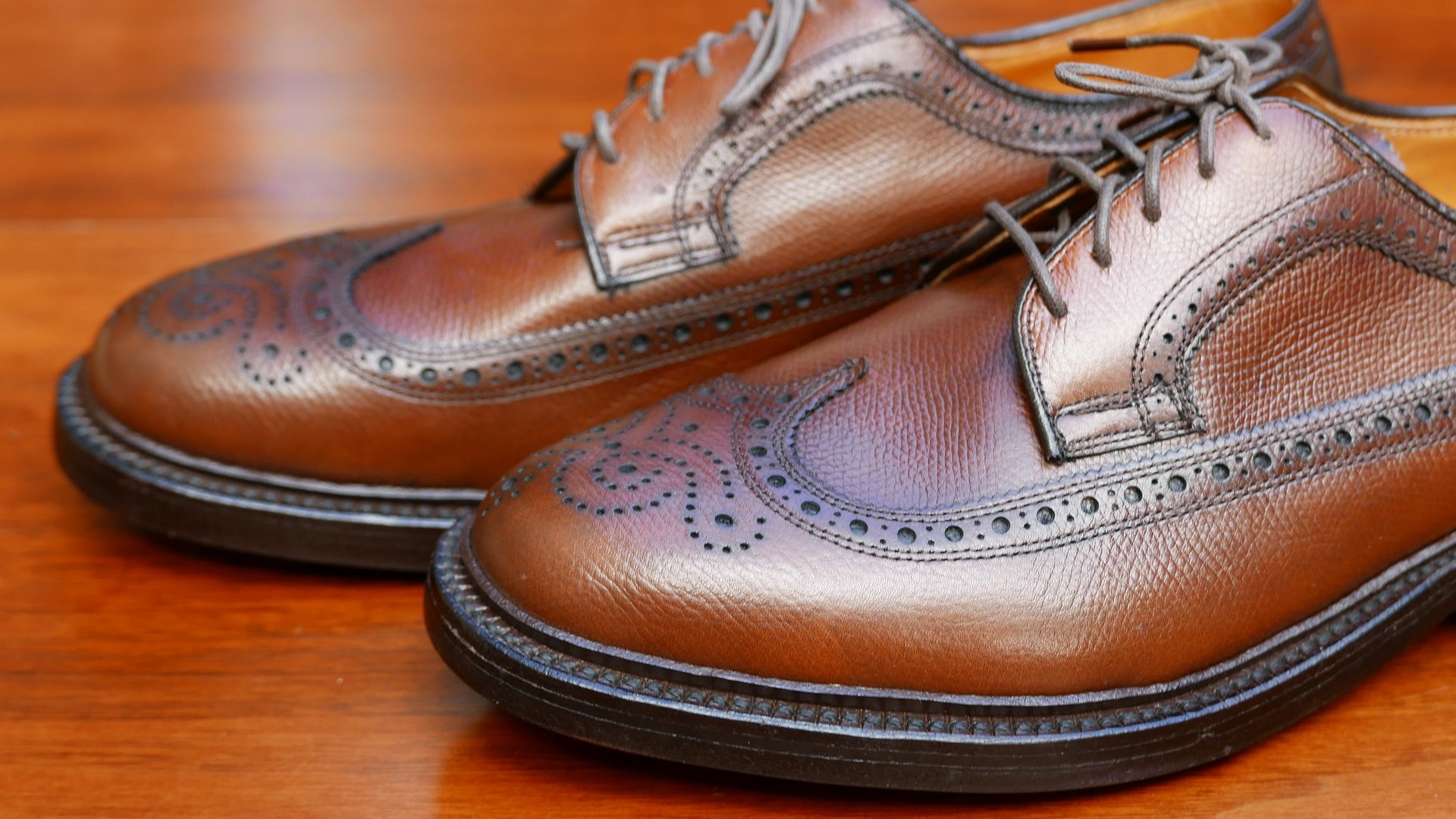 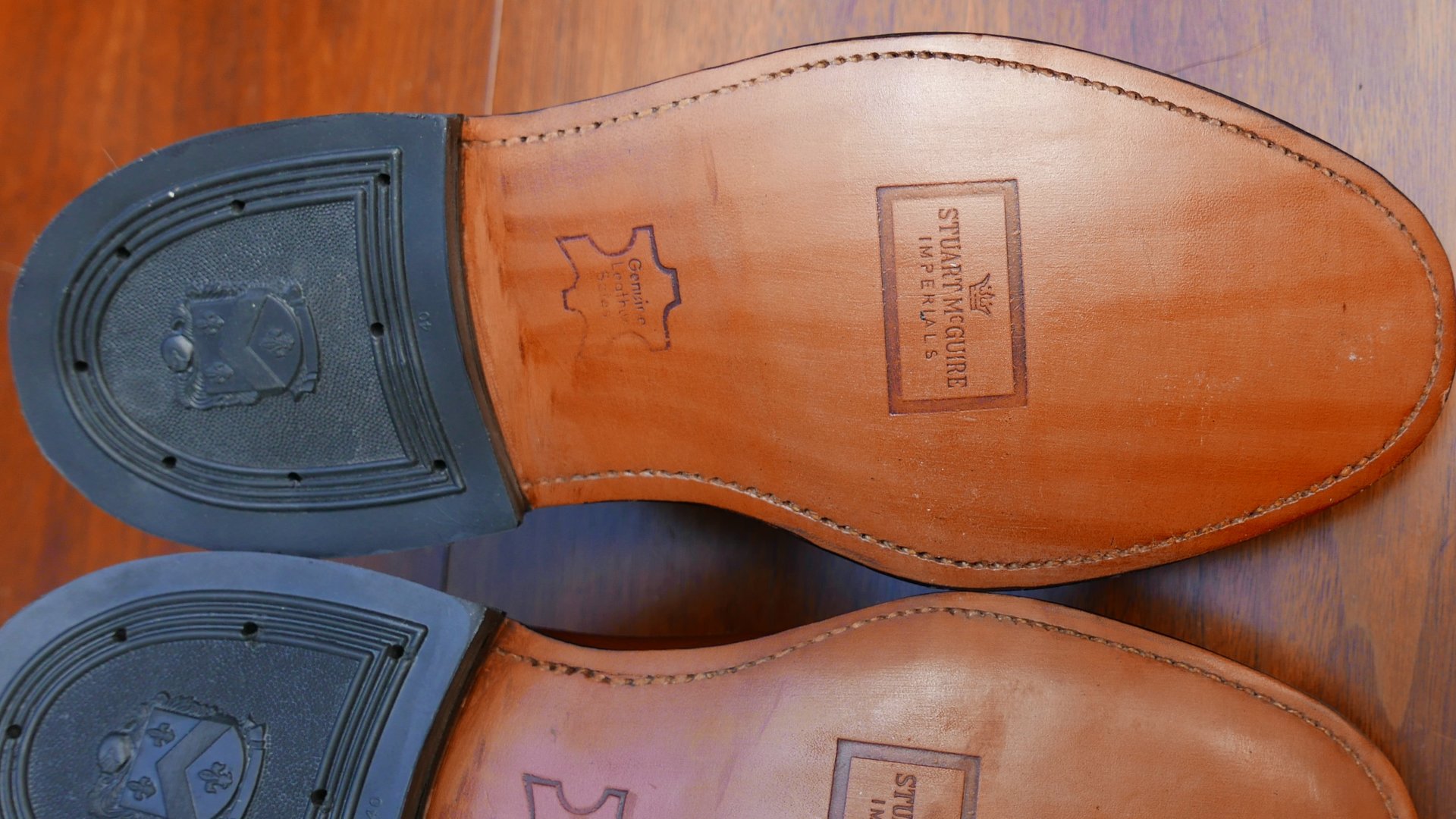 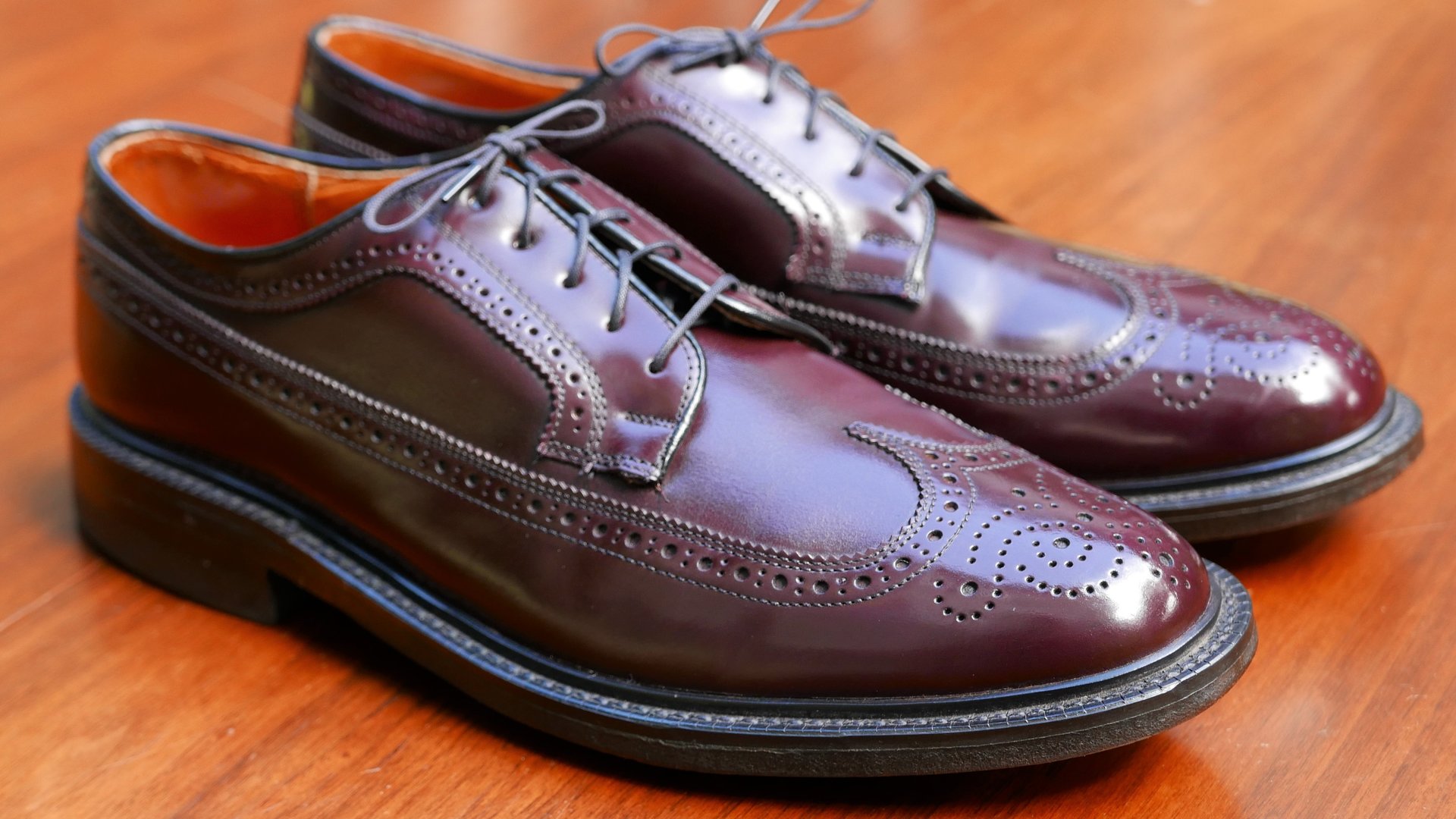 See many of the best Stuart McGuire pairs that have sold on my Watch List Search page.