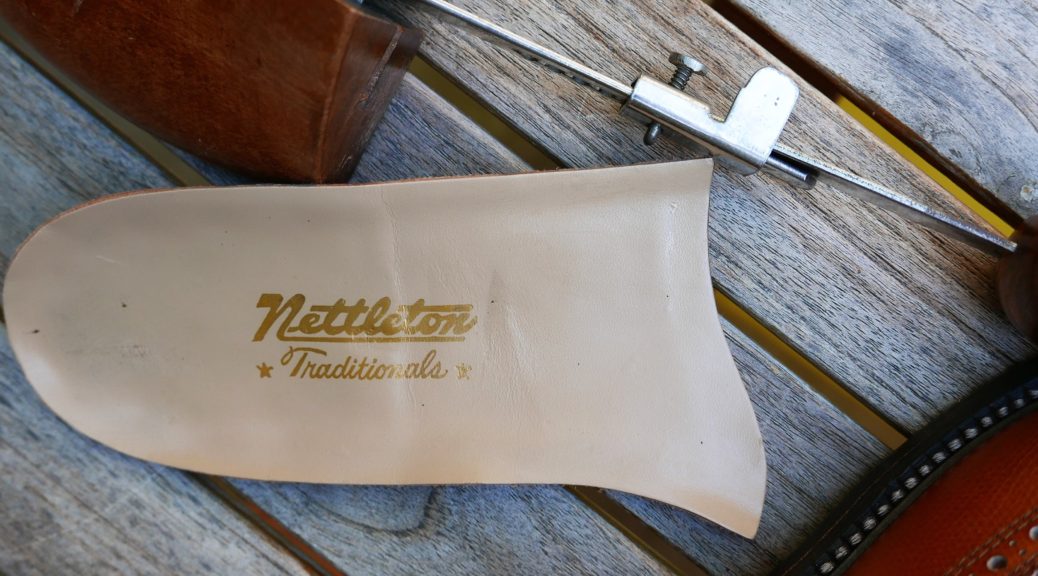 I would like start out this post by apologizing. The photos are true. I am sorry. I did grope the shoes. I manhandled them. It was a moment of weakness. How could resist conditioning them? Brushing them. The vcleat.com board of directors are meeting next week to discuss corrective action and my fate. I am not worried but some of the employees are already talking about the end of site. They are concerned. Especially the staff in the vcleat.com shoe lace restoration division. It’s a specialized skill that doesn’t translate well to other industries. The plus side of the whole thing is that this incident makes me very eligible for a new career in Washington DC or Hollywood.

This is another pair I have manhandled. It’s a pair of vintage Nettleton brown pebble grain long wings, model number 0205. I have another Nettleton 0205 pair and covered them in an older post, but they were a bit small. When I found a slightly bigger pair, I bought them. This was the pair when they arrived. Dusty and dry but not too bad. 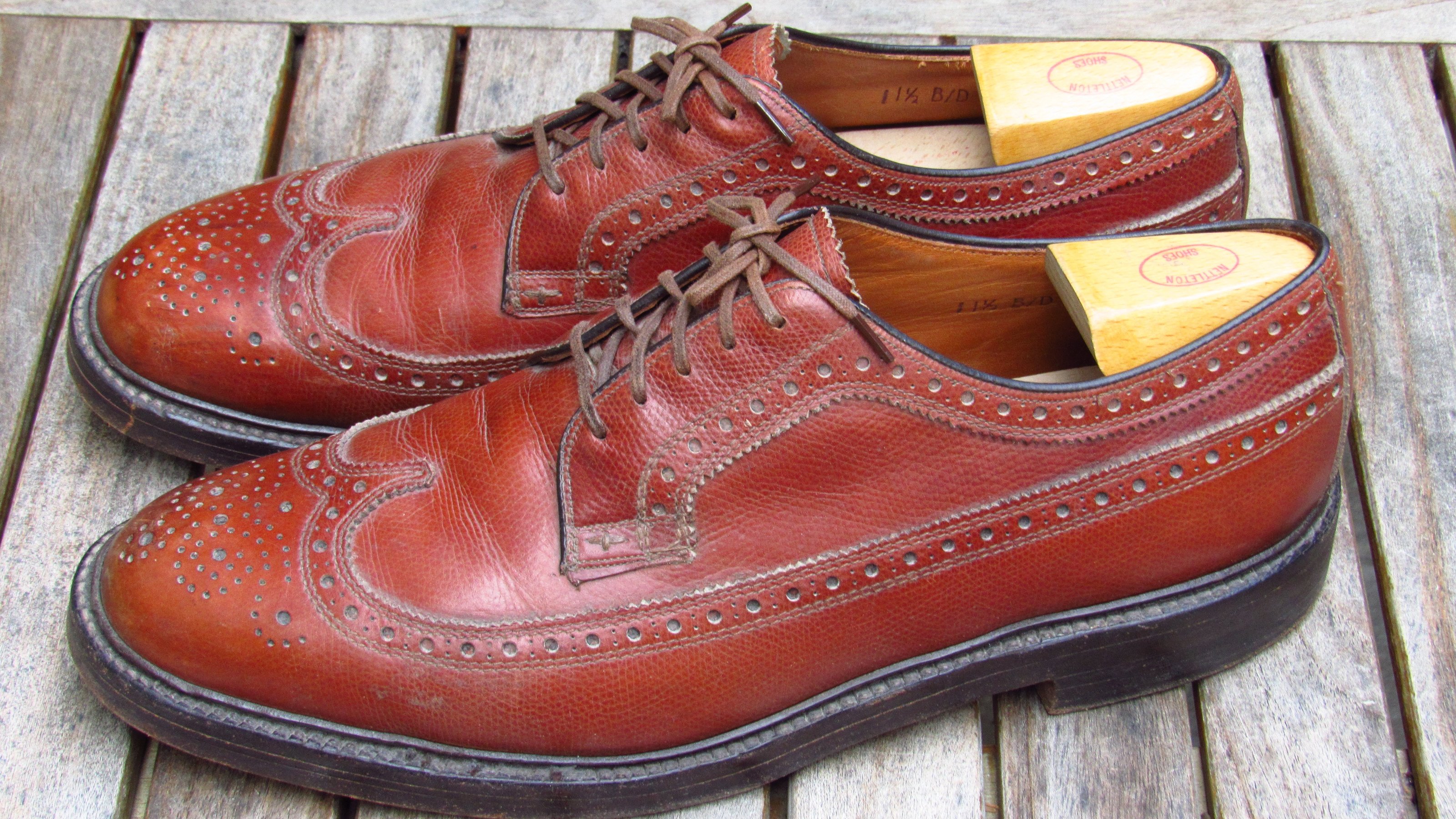 I took this photo many months ago and when I looked at it again, I thought, where did those cool Nettleton shoe trees go? They went missing. I literally have crates of shoe trees. Someday I will do a review of vintage shoe trees. But that time is not now.

This is a summary of my restoration process for this pair:

I decided to give the shoes a full conditioning treatment since they were dry and creased. Below is the pair after being cleaned and then conditioned with Lexol NF. The Lexol is still wet on the leather. The shoes appeared lighter. Not sure why. 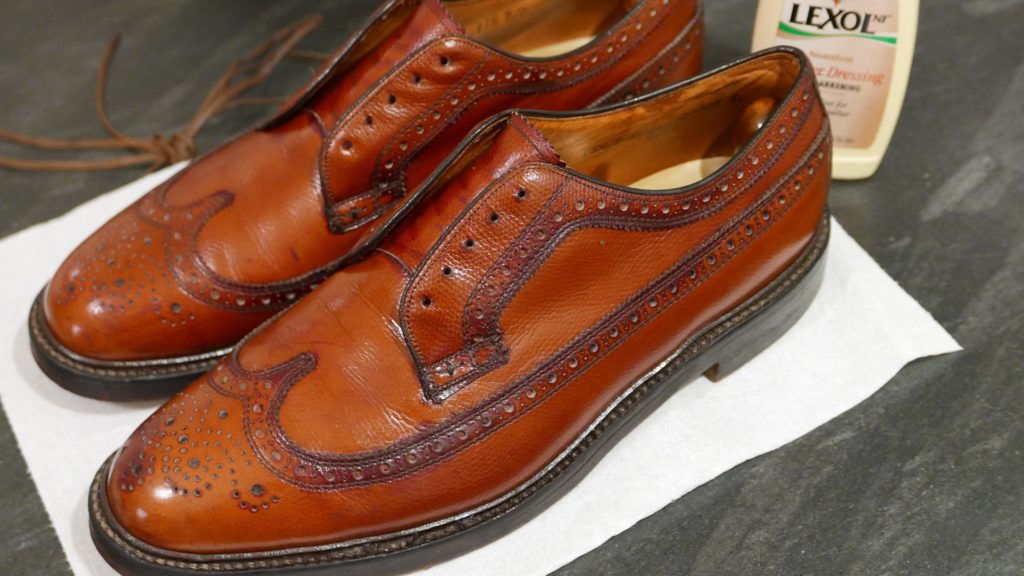 I waited a day after conditioning with Lexol and then gave the pair a glycerin treatment. It turned the pair burgundy in color. Below is a photo of the pair still wet with the glycerin mixture. 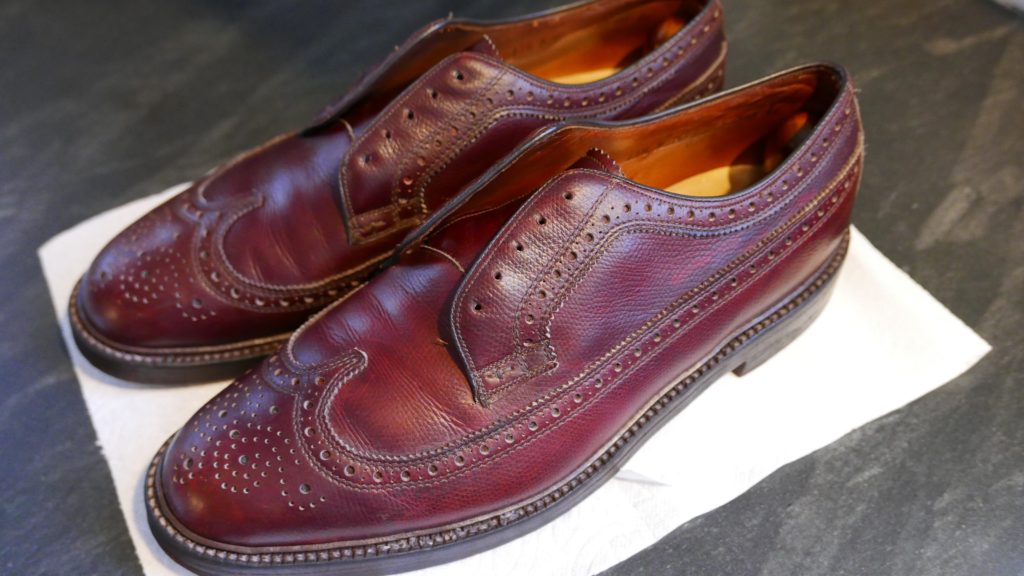 The next day the pair returned to their original color. The leather felt cool and supple. The creases lessened but still remained. 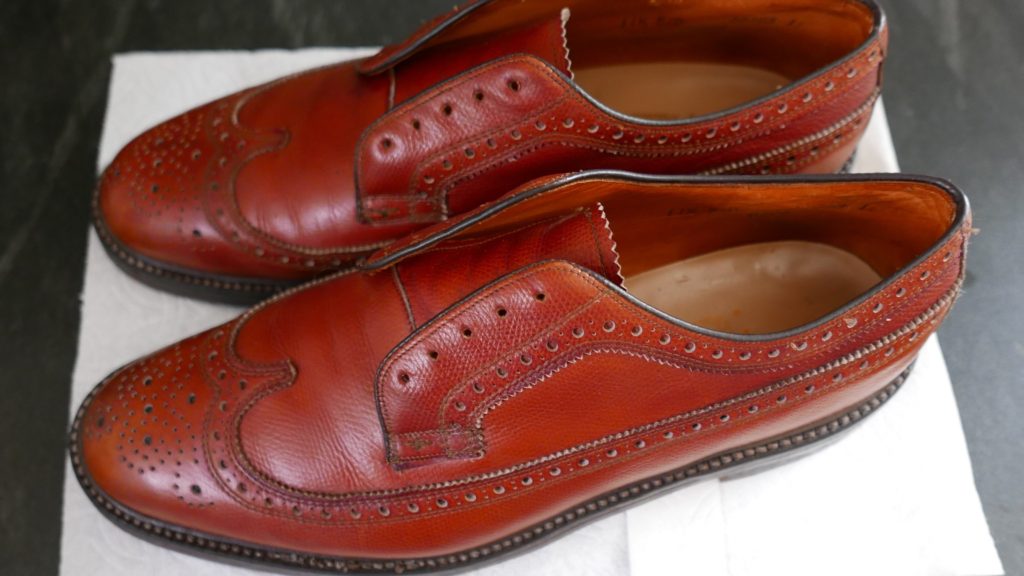 After the shoes were completely dry, I applied a round of Bick 4. I have been following up the glycerin treatment with Bick 4. Not sure its needed but Bick 4 leaves the shoes with a clean feeling. After Bick 4, I gave the pair two rounds of Collonil 1909 medium brown cream. The Collonil cream is a reddish brown and matched the leather color fairly well. 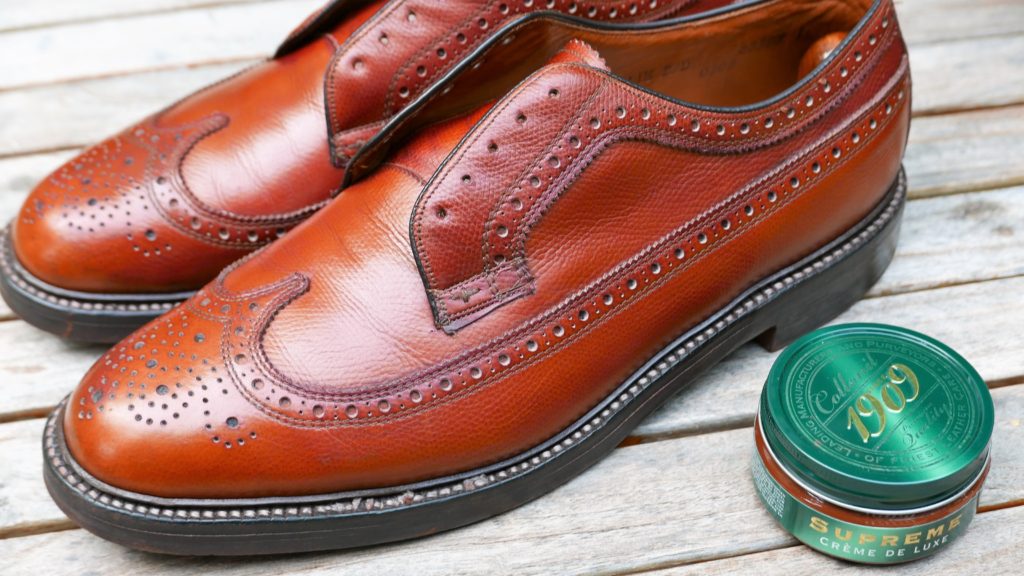 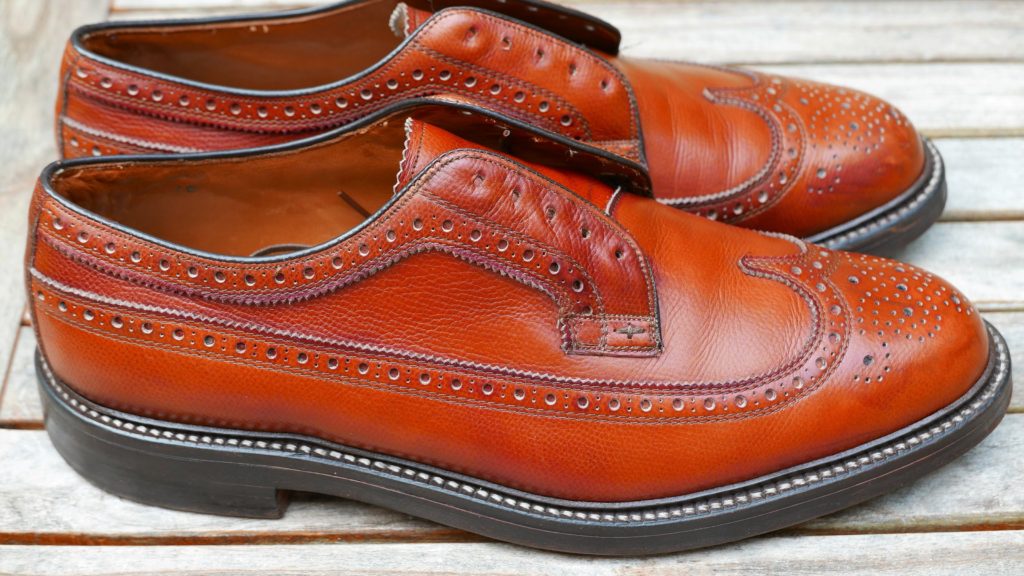 The left shoe had a minor gouge on the toe. 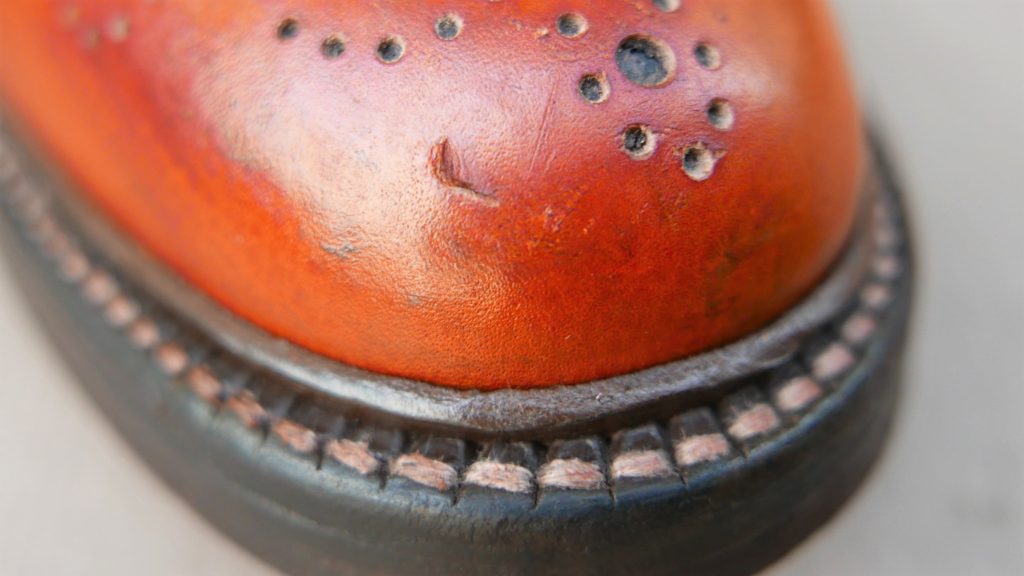 I had bought some Saphir Cream Renovatrice which was said to be ideal for filling and correcting cuts and scuffs in leather. I followed the directions and used it to fill the hole. 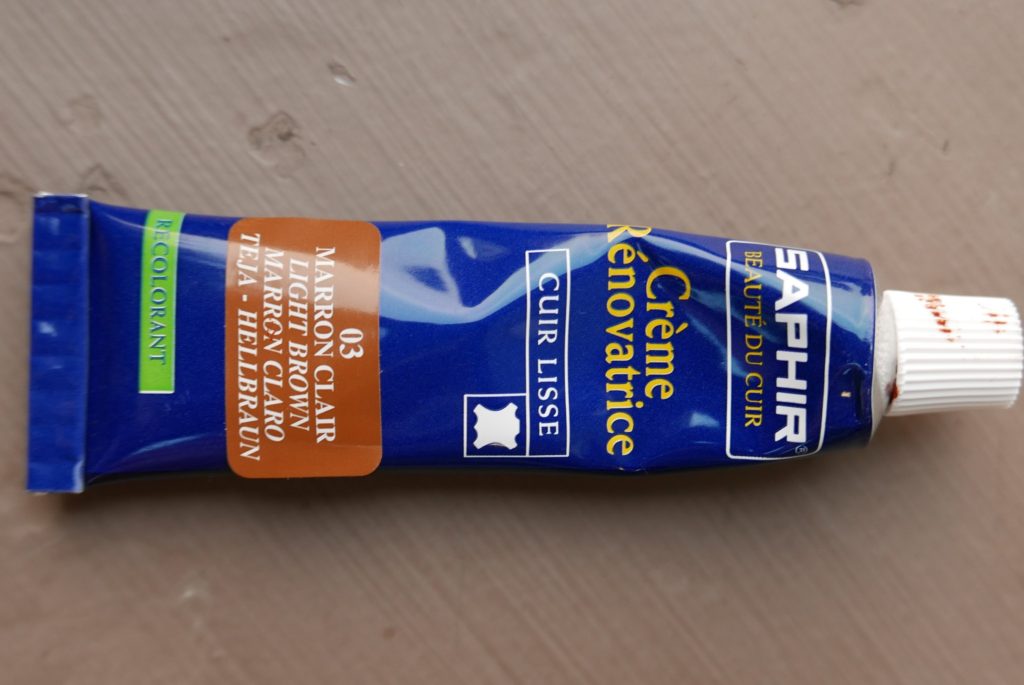 It wasn’t the easiest material to use. It filled the gouge but it also filled depressions in the scotch grain. The color also wasn’t a great match for the Nettleton leather. I ended up sanding the leather and recoloring it with the Collonil cream. The end result was a mostly filled hole and a smoothed area on the toe. I might have applied the material wrongly but I regretted using it. I should have bought a black tube and tried it first on a black sole edge first. 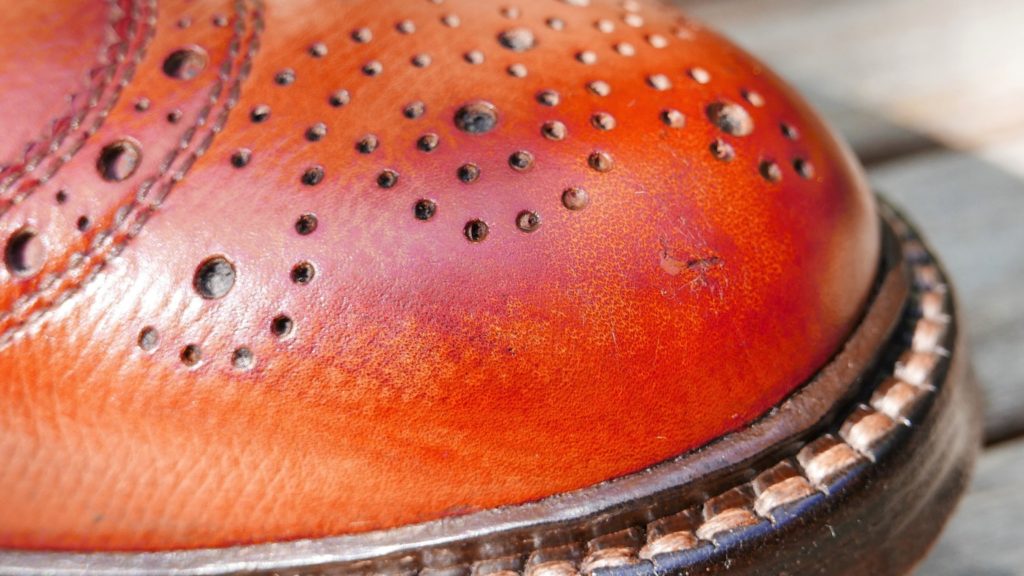 One of the foot pads was coming apart from the insole and I pulled it off. Under the foot pad, the insole was marked with the shoe size (an underlined 11 for 11.5) and “Nettleton Duncan”. I am assuming the model name then was Duncan. But that’s a educated guess. 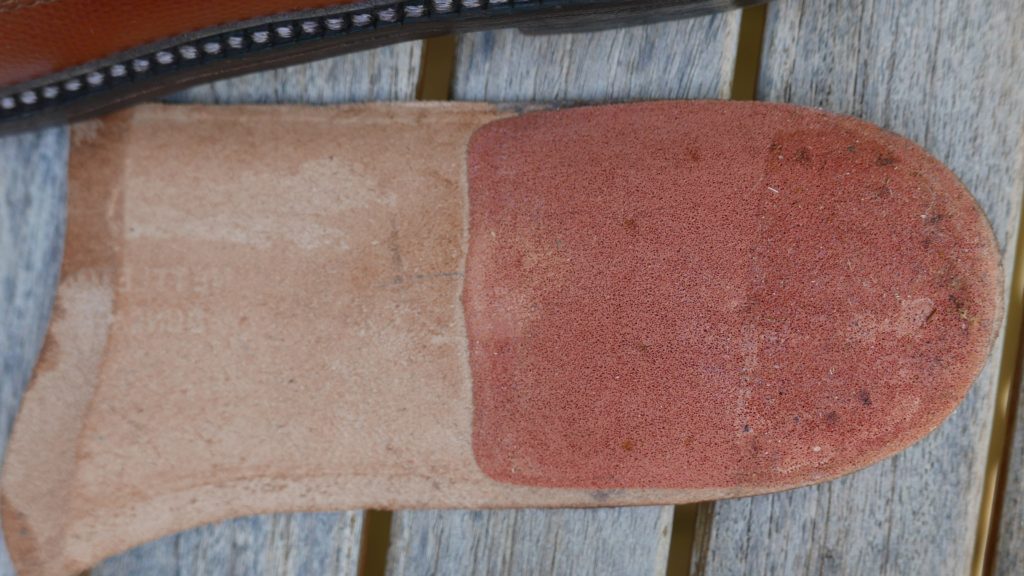 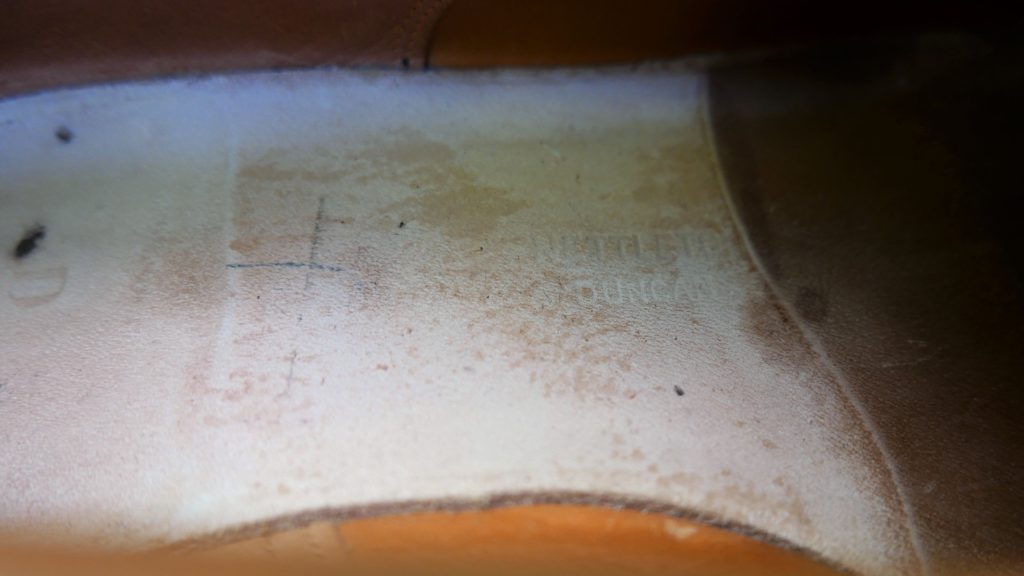 I thought about burnishing the pair and tested the burnish on a small area on the inside of the shoe. I didn’t like the result so I left them as is. What’s odd is that my first pair was burnished (see photo below), while this pair was not. Also, the first pair was low and wide in shape while the shape of this pair is tall. And the color is different. Of all the vintage brands I have owned, Nettleton seems the least consistent. Maybe that is due to all the ownership changes but you would figure that the “The World’s Slowest Made Shoe” would generally produce similar results. Slow, consistent results. 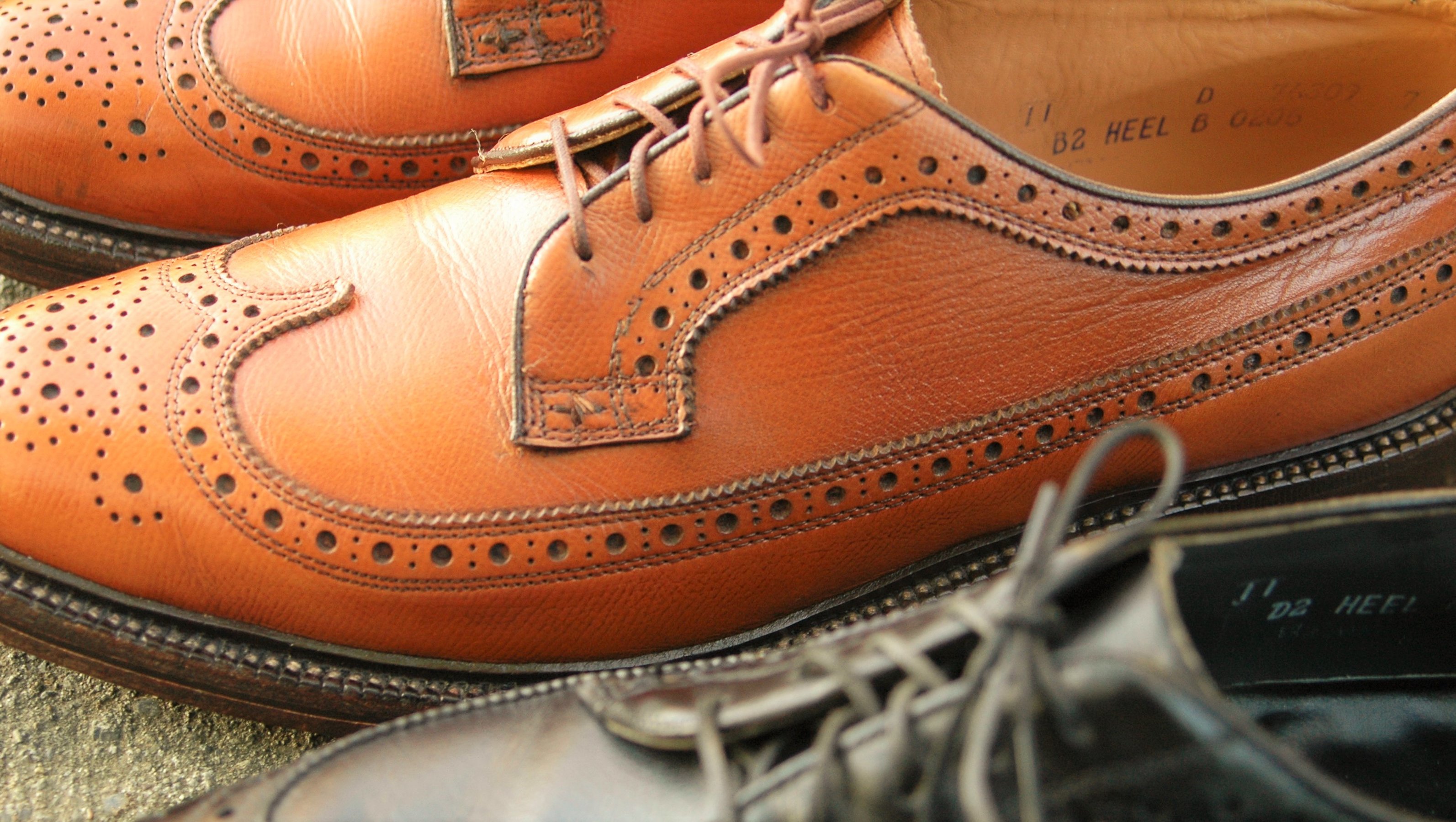 I have been wearing the shoes regularly. Probably less regularly now that the rainy season(s) has returned to Seattle. Compared to a Florsheim Imperial Kenmoor of the same size, the Nettleton toe box is a bit wider. It feels more like a 11.5 E than D. Its also a taller shoe. They are nice shoes but rate them below a Kenmoor in terms of fit and comfort. Nettleton stitching is also not as good as vintage Florsheim. The Nettleton upper and sole leather quality is first rate though. When buying, I would recommend sizing down one size (either width or length). 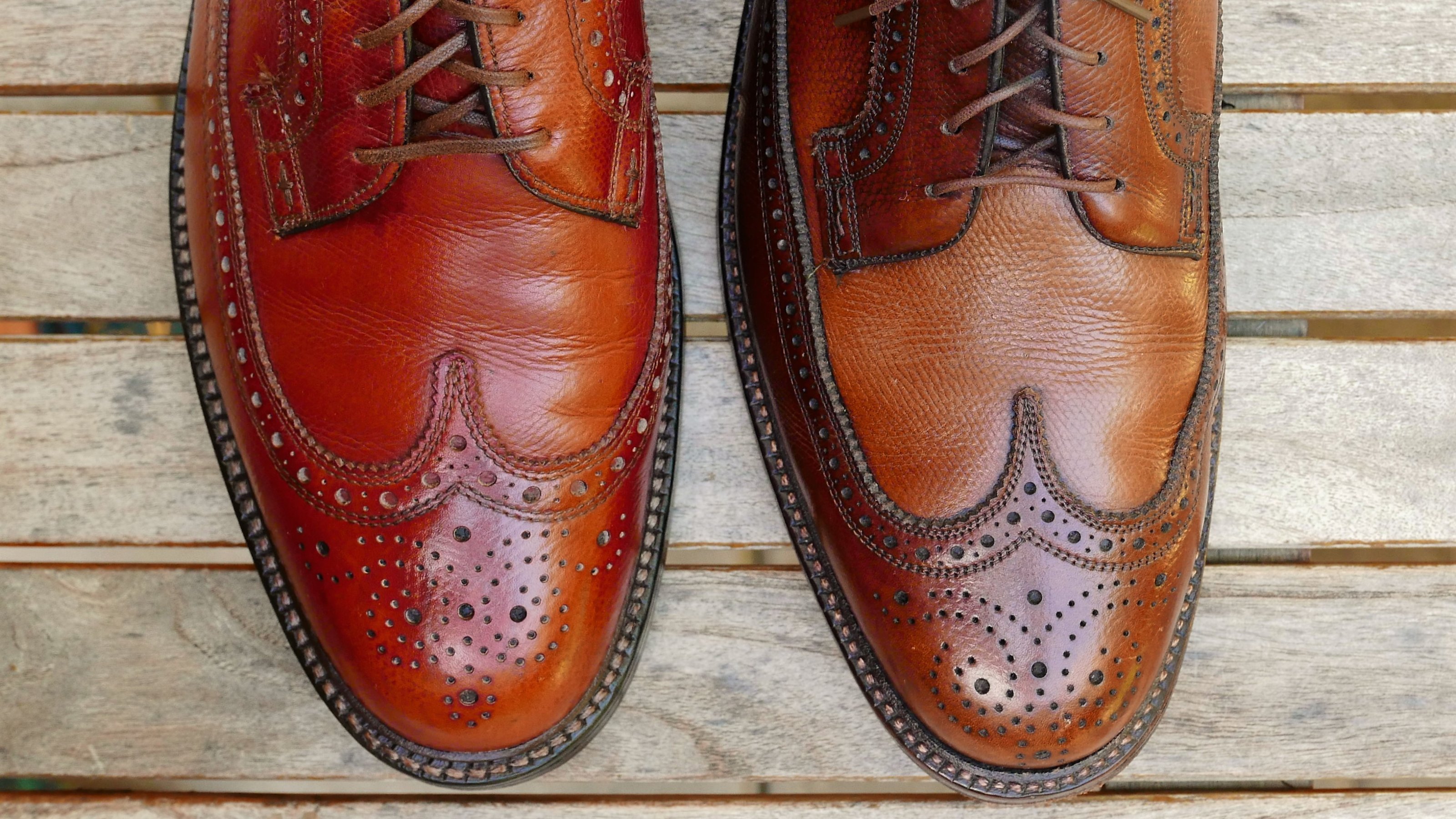 The color of the pair is a reddish brown. I sandwiched the Nettleton between an early 70s and late 70s pair of Florsheim Imperial Kenmoors for a comparison of the colors. 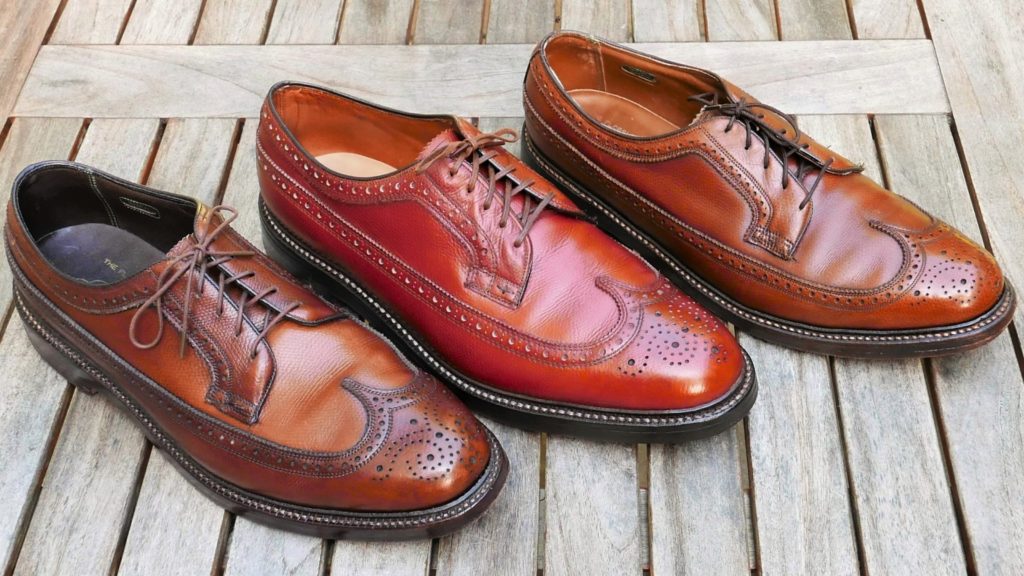 I hope that this isn’t the last post. I suspect it won’t be. We’ll see. In the meantime, below are a few more photos to peruse. 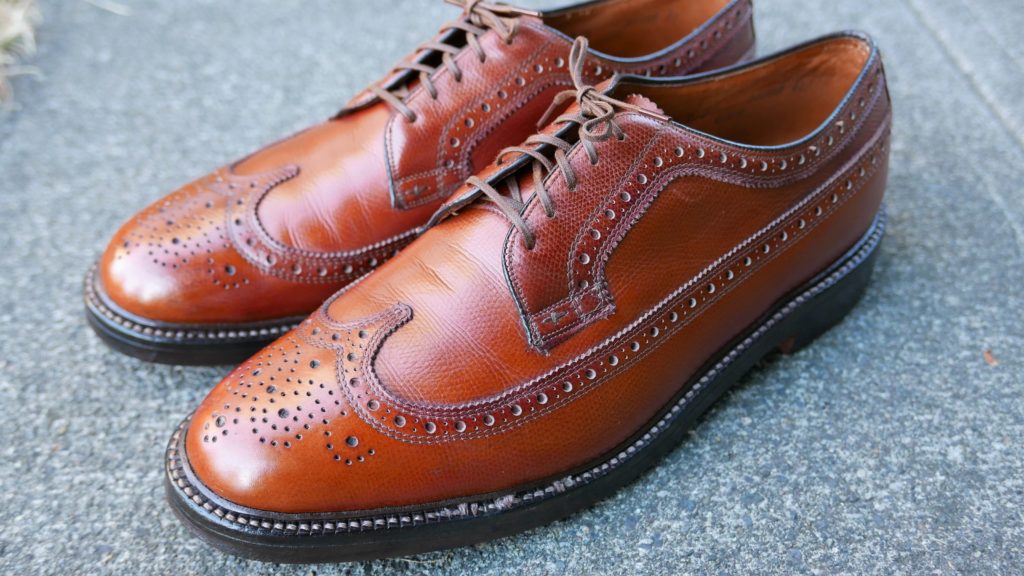 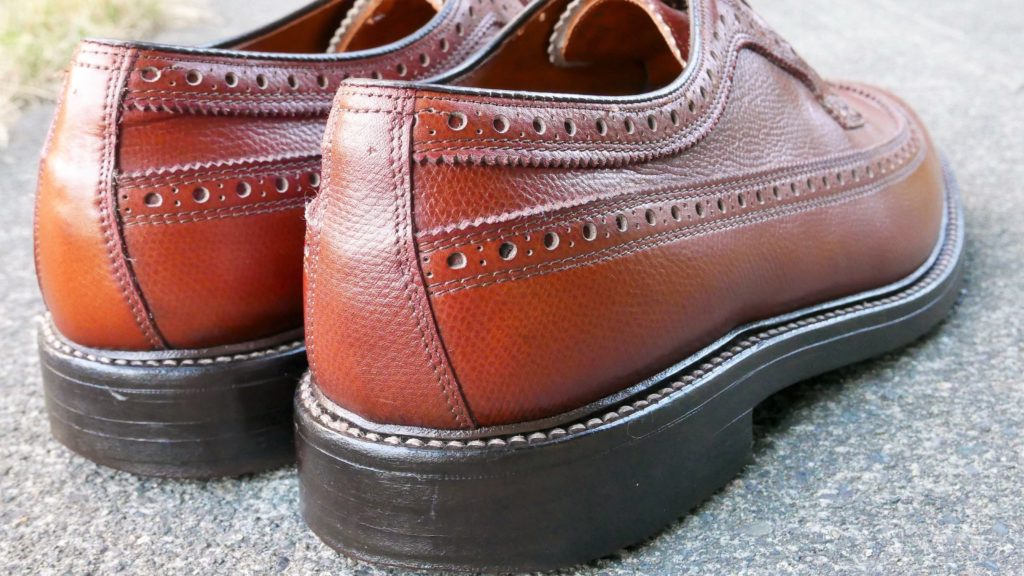 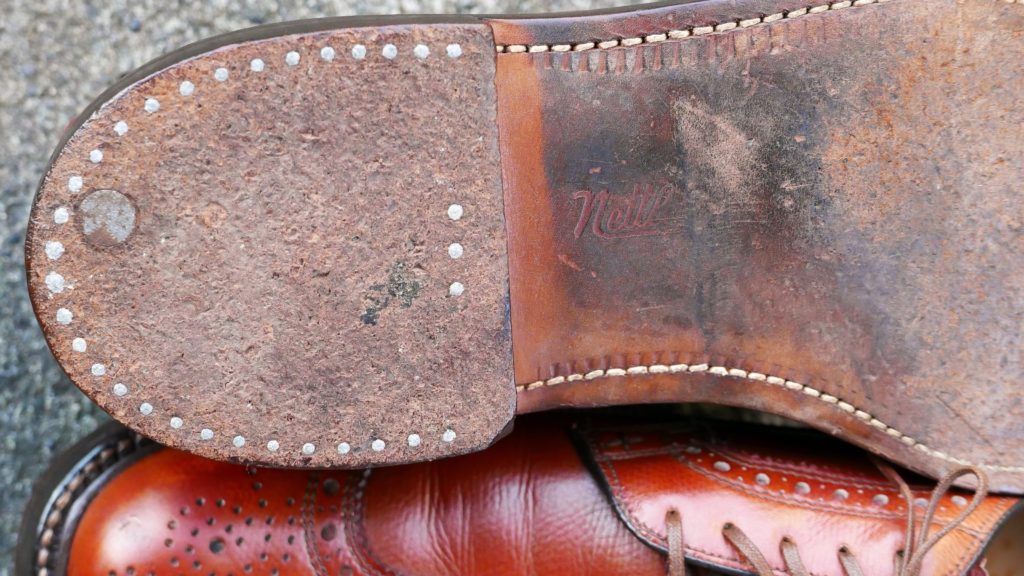 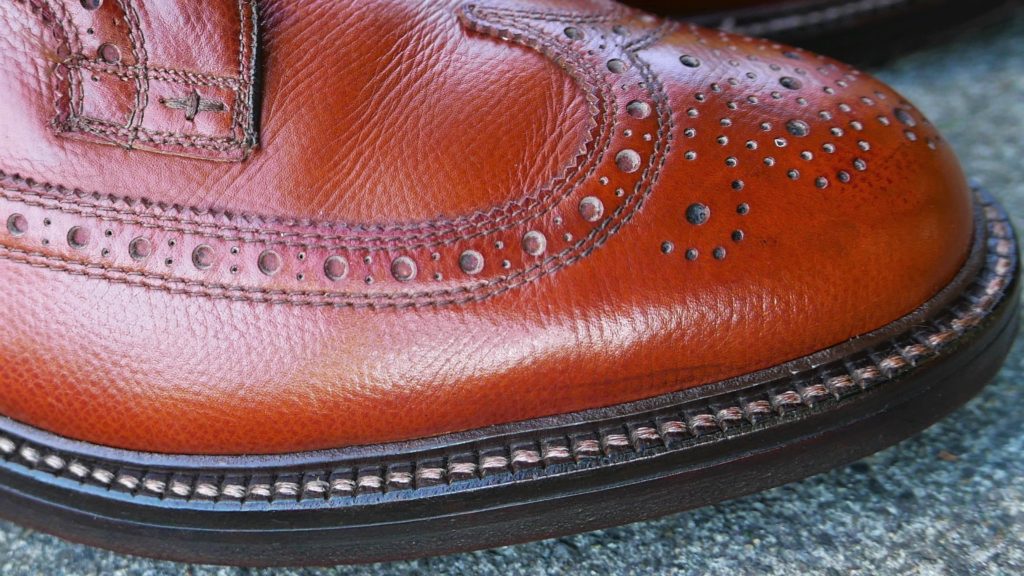 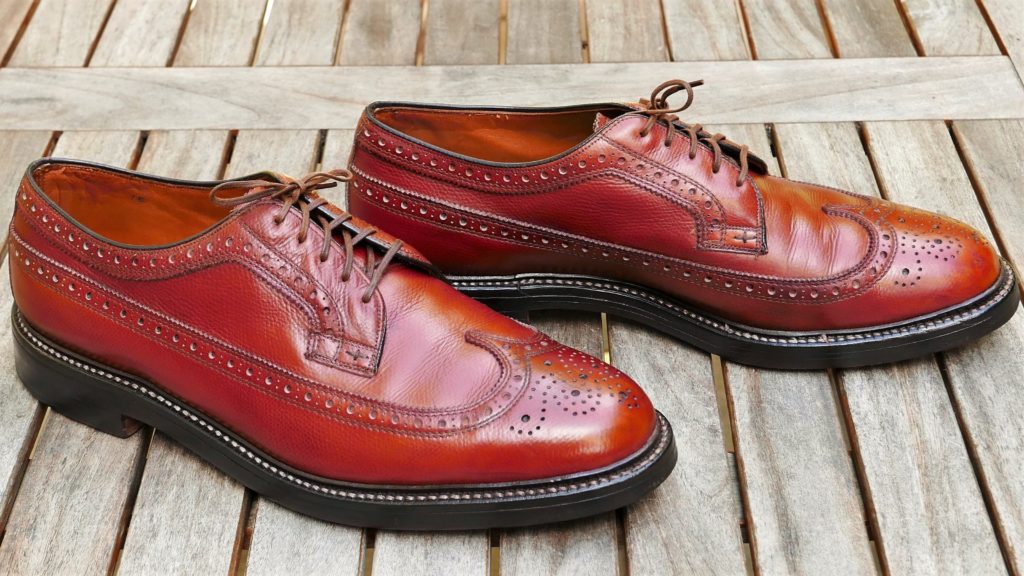