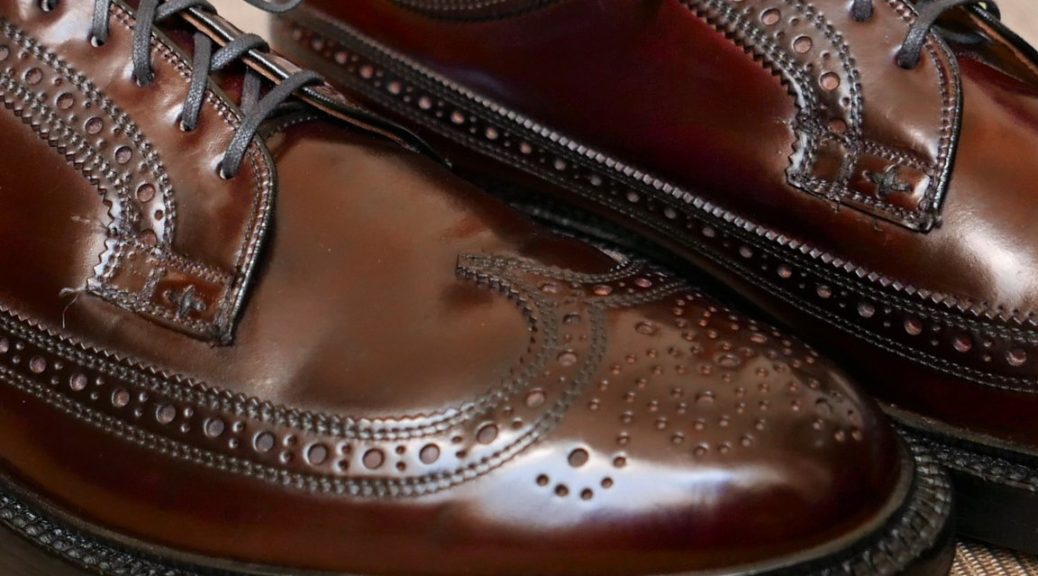 The US government may still be shutdown but vcleat.com has reopened. Finally. Sorry. I could give excuses but I won’t.

This post is about fixing up a pair of Nettleton Traditionals Shell Cordovan long wings. Model 0208. I found this pair on eBay. The listing had a few issues: the photos were poor; the size was mislabeled – 11 instead of 11.5; and the shoes were dirty. But you could tell a couple things in the listing photos: the sole and heel were original with light wear; there didn’t appear to be any cracks in the Shell Cordovan upper. So the pair had hope. They were a bit like a car barn find. Hopefully the seller found a 1970 Ford Mustang Boss 302 along with the Nettleton pair. This is how the pair looked when I pulled them out of the box. Dirty but I have seen worse. 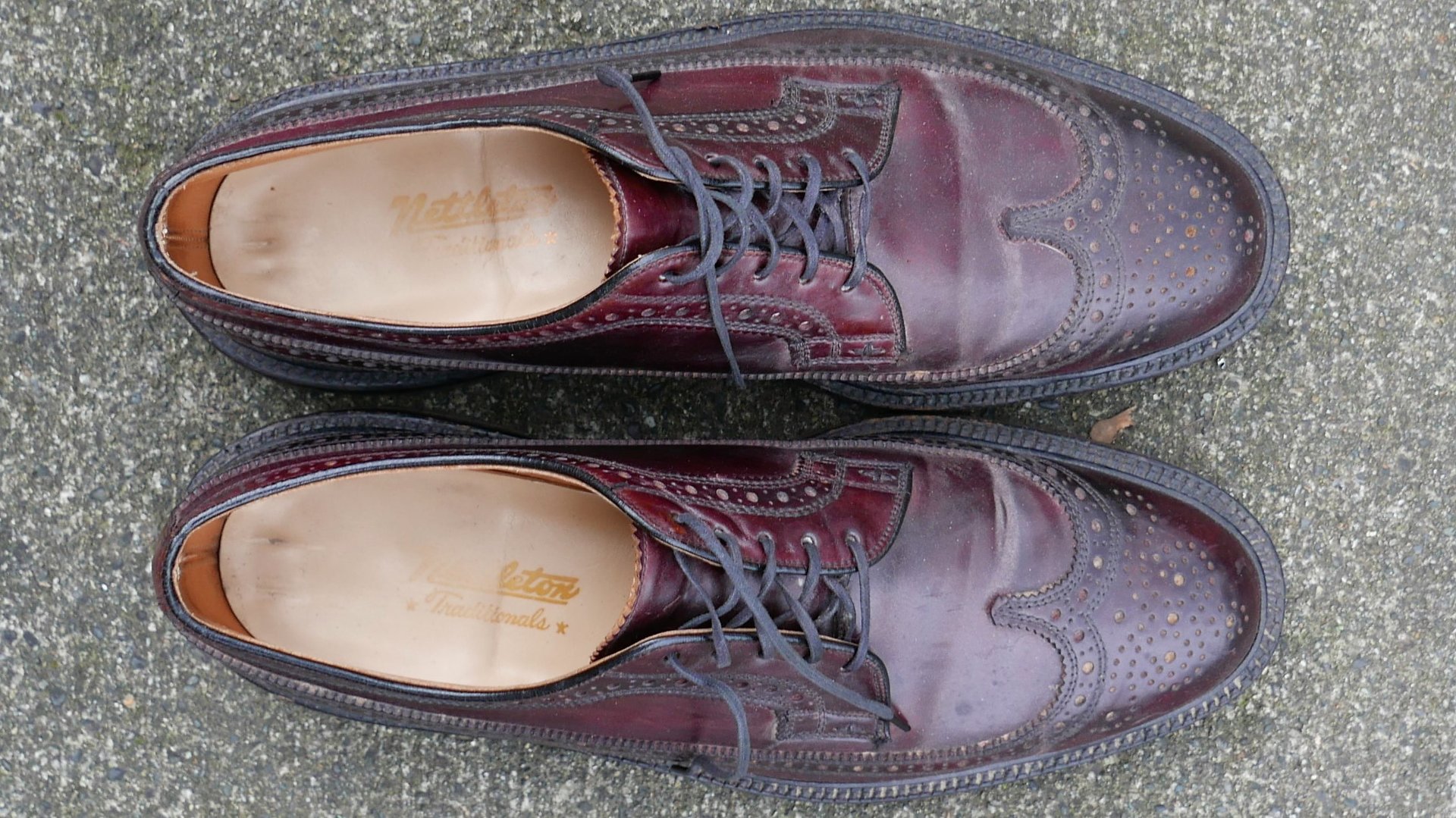 For restoring the pair, I used the products below. When using shoe care products, I always follow the directions on the label. So should you.

The restore took three days and probably a total of four to six hours. The hours are a guesstimate. I didn’t clock in or out. While working on the shoes, I tried to take photos of the pair from the same angle after each to show the progress. But this photo documentation didn’t work out so well due to my choice of using natural light and the inconsistent Seattle winter weather. The first day was cloudy, the next day rainy and the third was sunny. So my plan didn’t work out but if all plans succeeded, we would be driving stainless steel DeLoreans.

These are the shoes without any treatments. Caked with grime and dust. 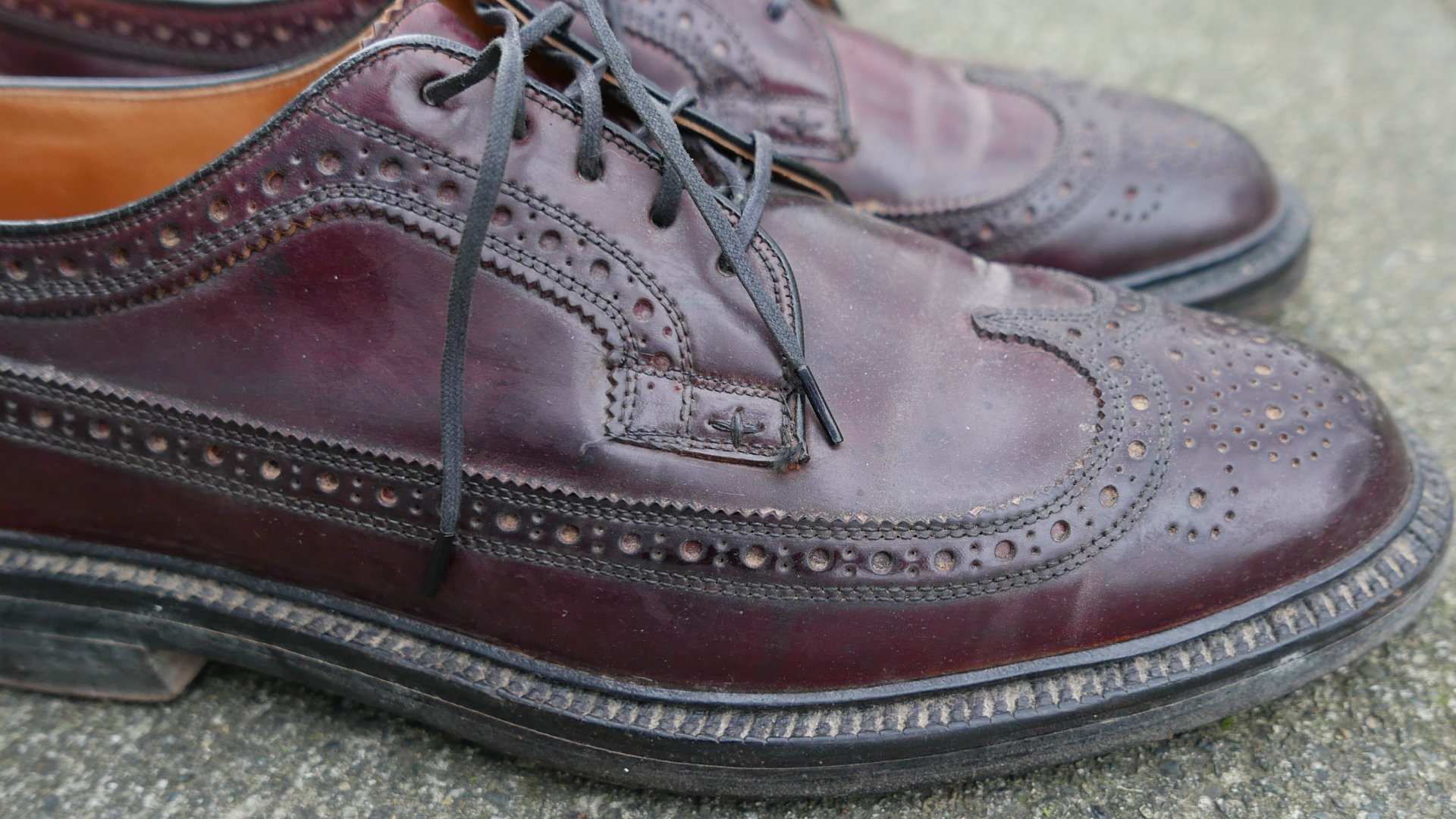 The first thing I did was wipe the pair with a damp cloth. Then gave the upper and welt a good brushing. I also cleaned the inside with an alcohol wipe and did a UV sanitization. I followed that with a round of Bick 4 on the upper Shell. After these basic steps, the shoes looked wearable. 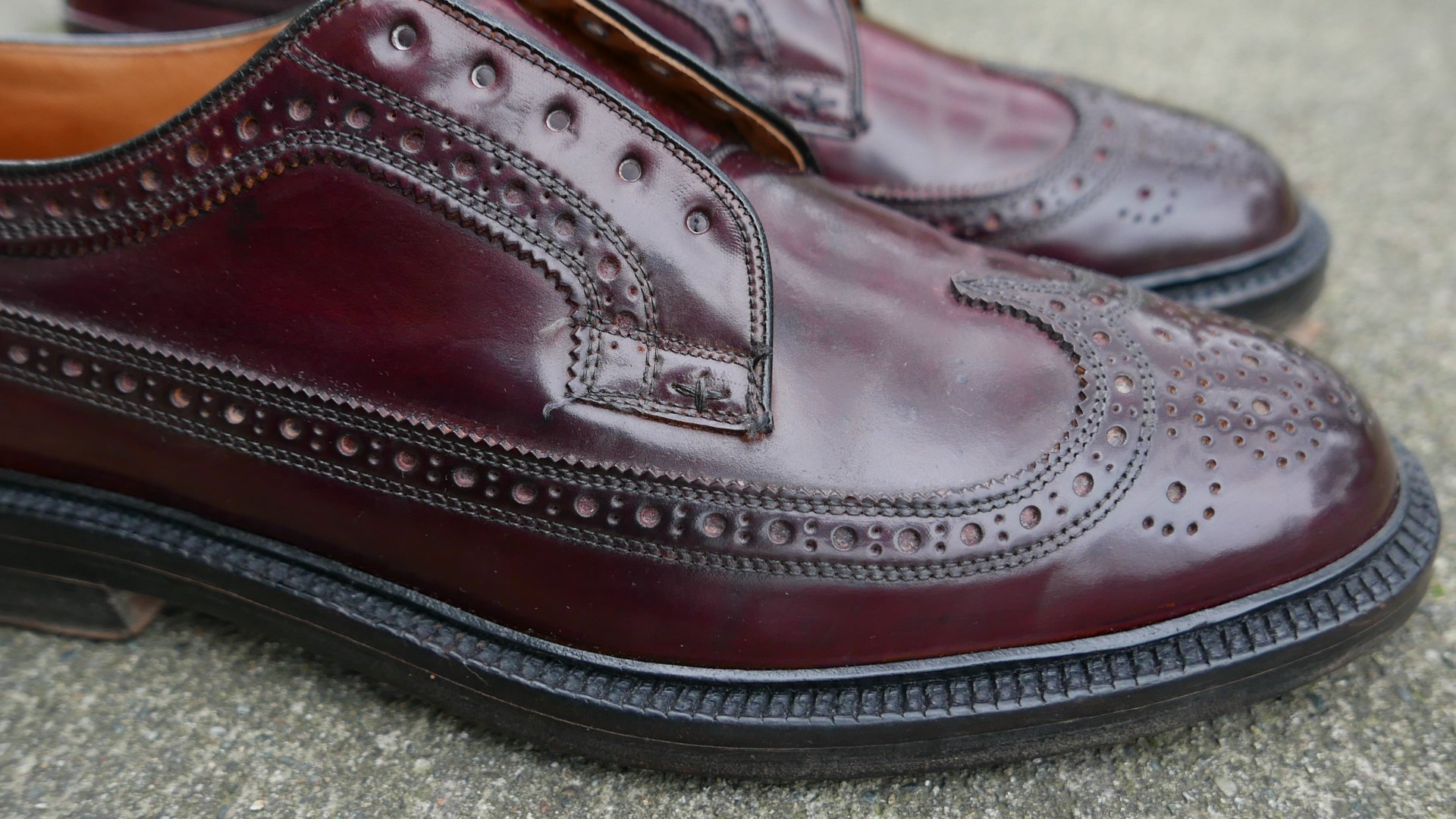 Vintage Shell Cordovan needs conditioning like avocado needs salt. This is because old Shell Cordovan can crack if dry. The potential of dry Shell makes vintage Shell Cordovan pairs a bit of a gamble. Thus it’s important to condition the upper. Very well. Over the years, I have liked Lexol Neatsfoot (NF) when dealing with vintage Shell. It is absorbed well into the Shell upper but it takes a bit of time to work its magic. For this pair, I applied the Lexol with a damp sponge and wiped off the excess after a few minutes. This left the upper looking oily and feeling tacky – see the photo below. 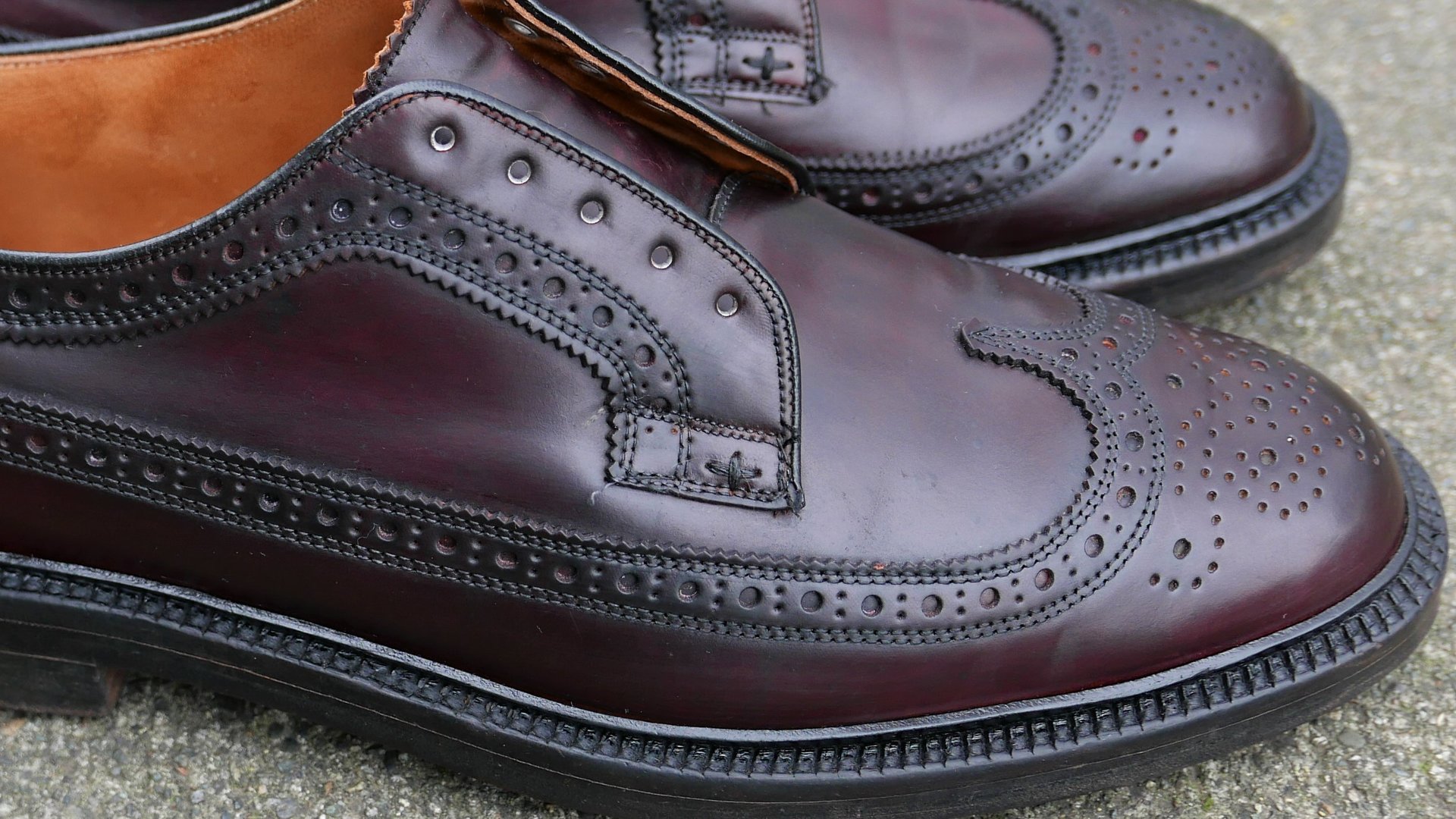 After a day of rest, much of the tackiness was gone. I then gave the pair a buffing with an old t-shirt. By the way, I use Bickmore Bick 4 for regular conditioning of Shell. I don’t recommend Lexol NF for normal week to week (or month to month), conditioning of Shell Cordovan. 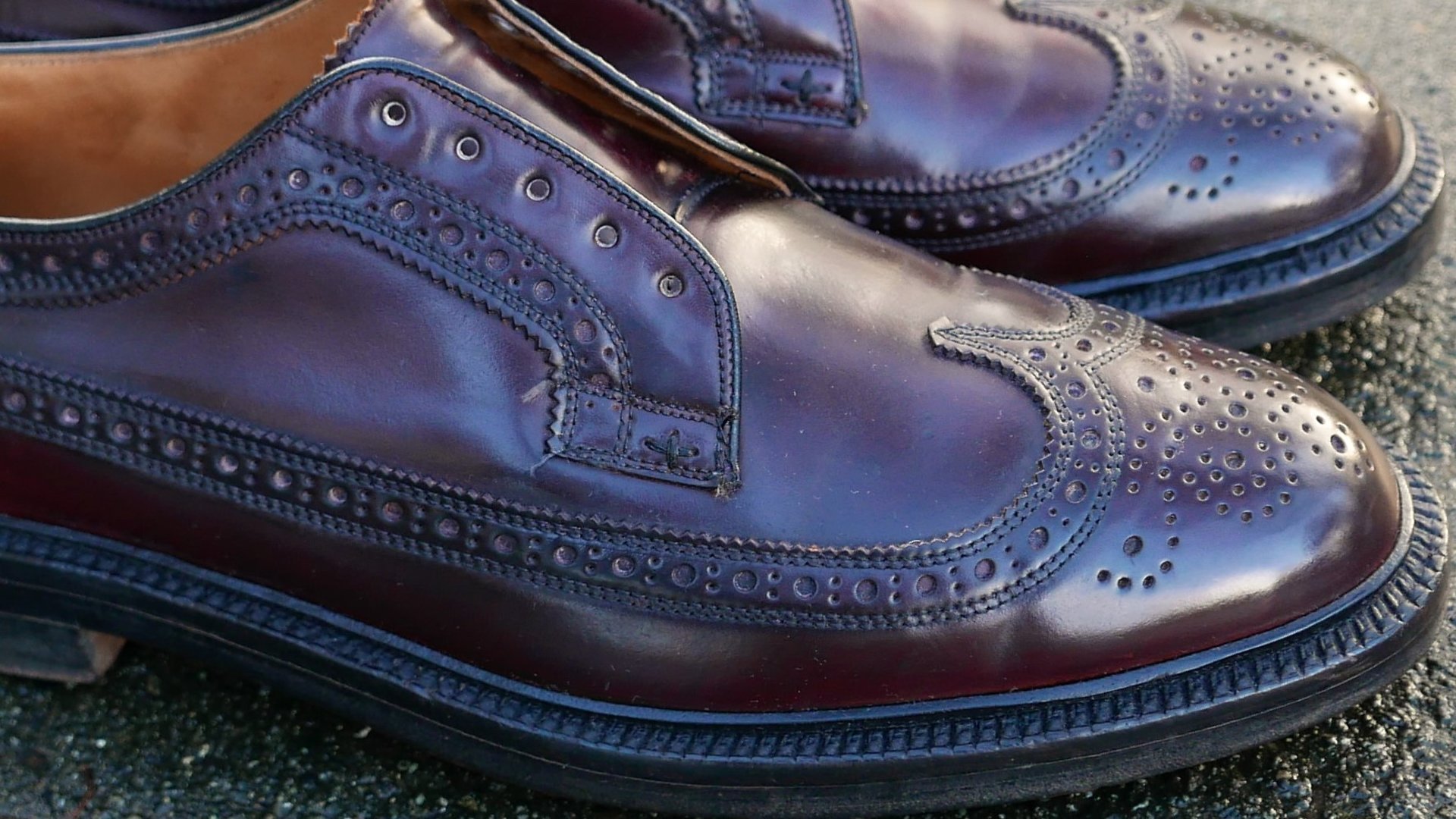 In my past restore efforts, I had found that Venetian Shoe Cream (VSC), did a great job on cleaning Shell Cordovan. It works especially well removing residue left from the eyelets on the tongue of the shoes. VSC will also help to remove old polish from the surface of the upper but isn’t as good as RenoMat for that. I decided against using RenoMat because it stinks (smells), and I sometimes see it overused by fellow vintage shoe enthusiasts resulting in more bad than good.

When I was cleaning the pair with VSC, it was pulling a good deal of color from the shoes. I assumed this was old waxes and not the finish of the shoe. 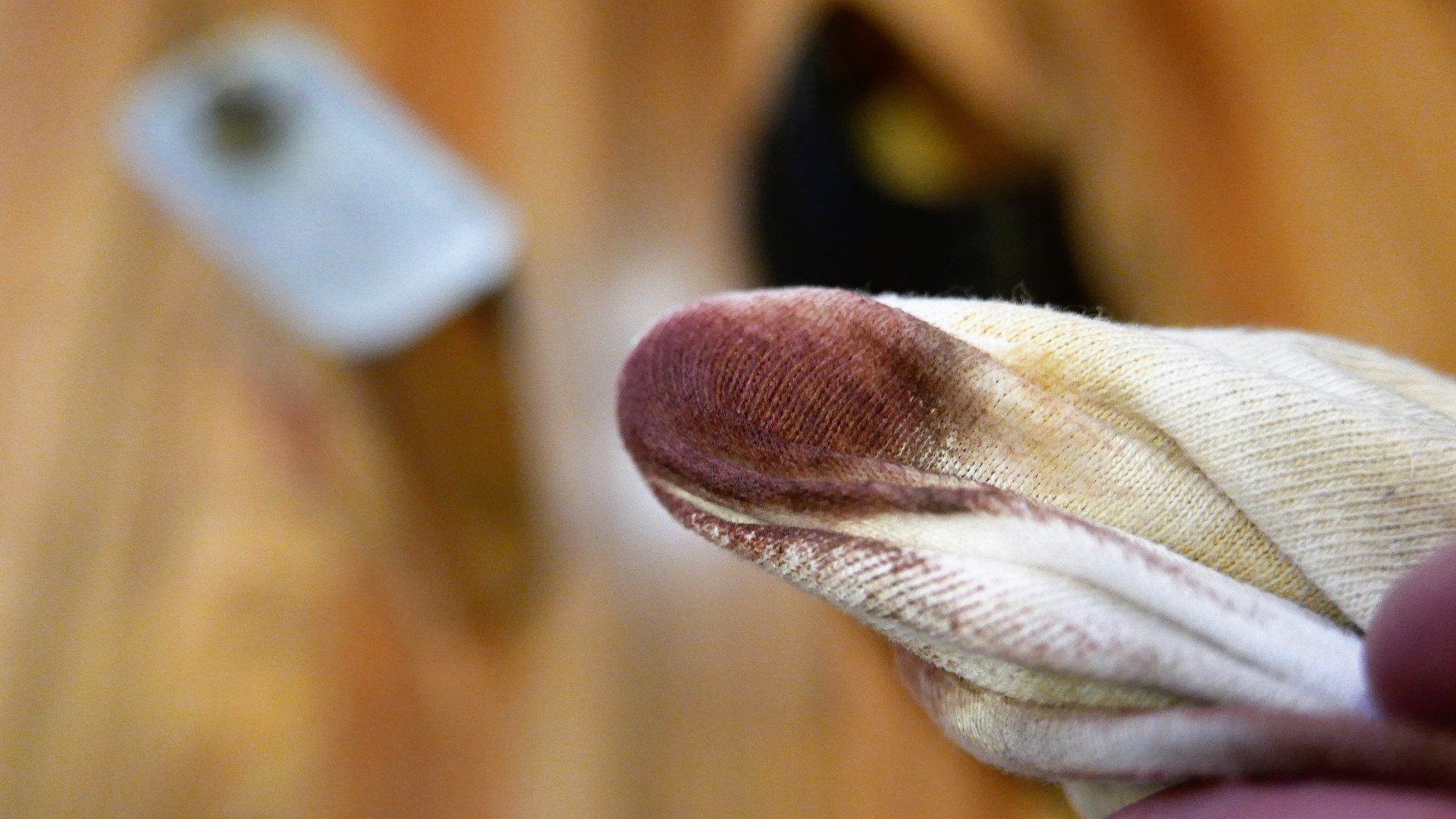 Below is the pair after cleaning with VSC: 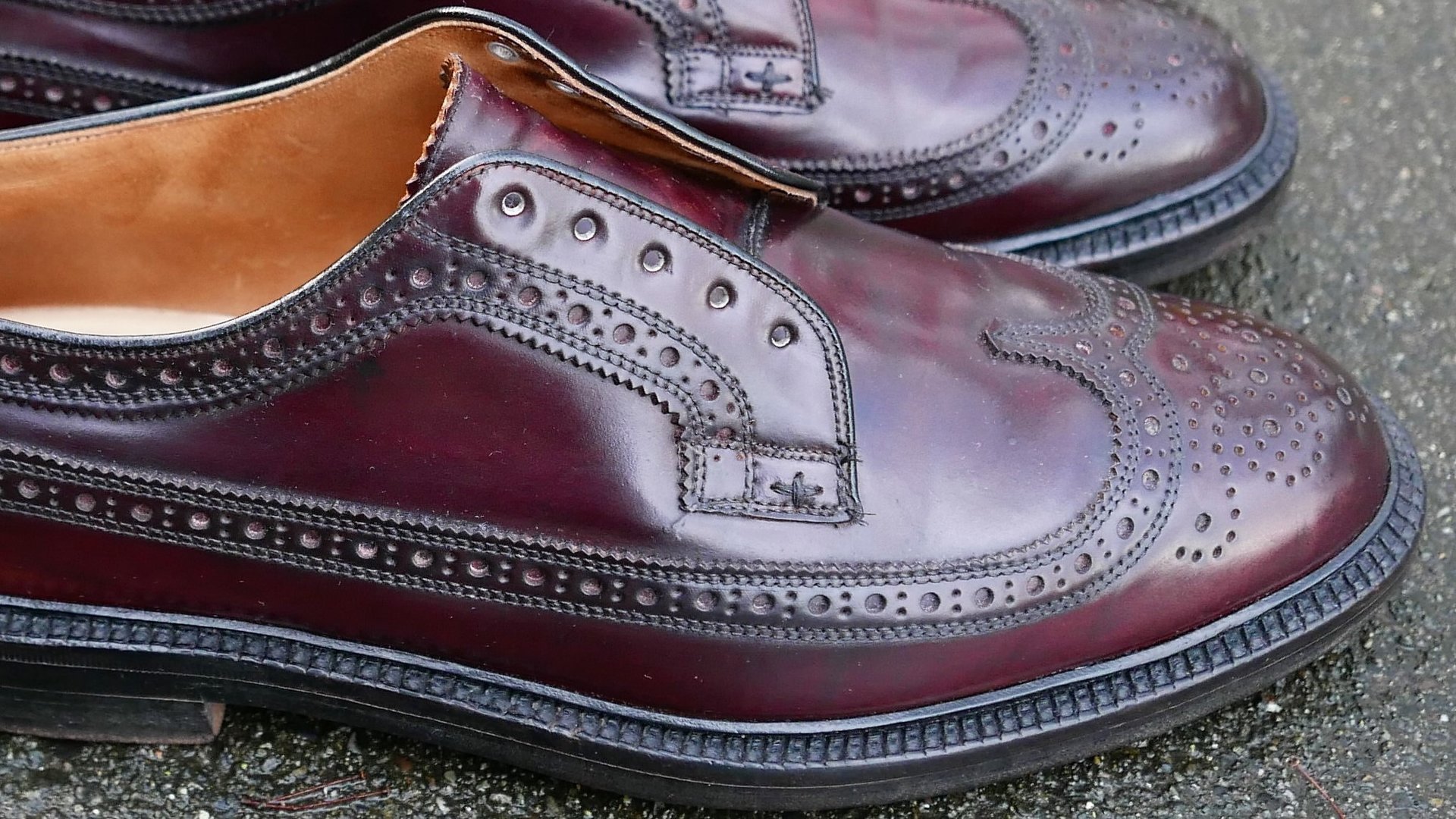 For polishing the pair, I first used a round of Allen Edmonds Black Premium Shoe Cream mainly on the broguing. I followed that with a round of burgundy Collonil 1909 Supreme Crème De Luxe. I also waxed the toes and rear quarters with Alden Color 8 Paste Wax. Each round of treatment was followed with brushing and buffing. The welt areas and sole edges were treated with both Allen Edmonds and Lincoln black edge dressing. Below is the results of the cleaning and polishing. 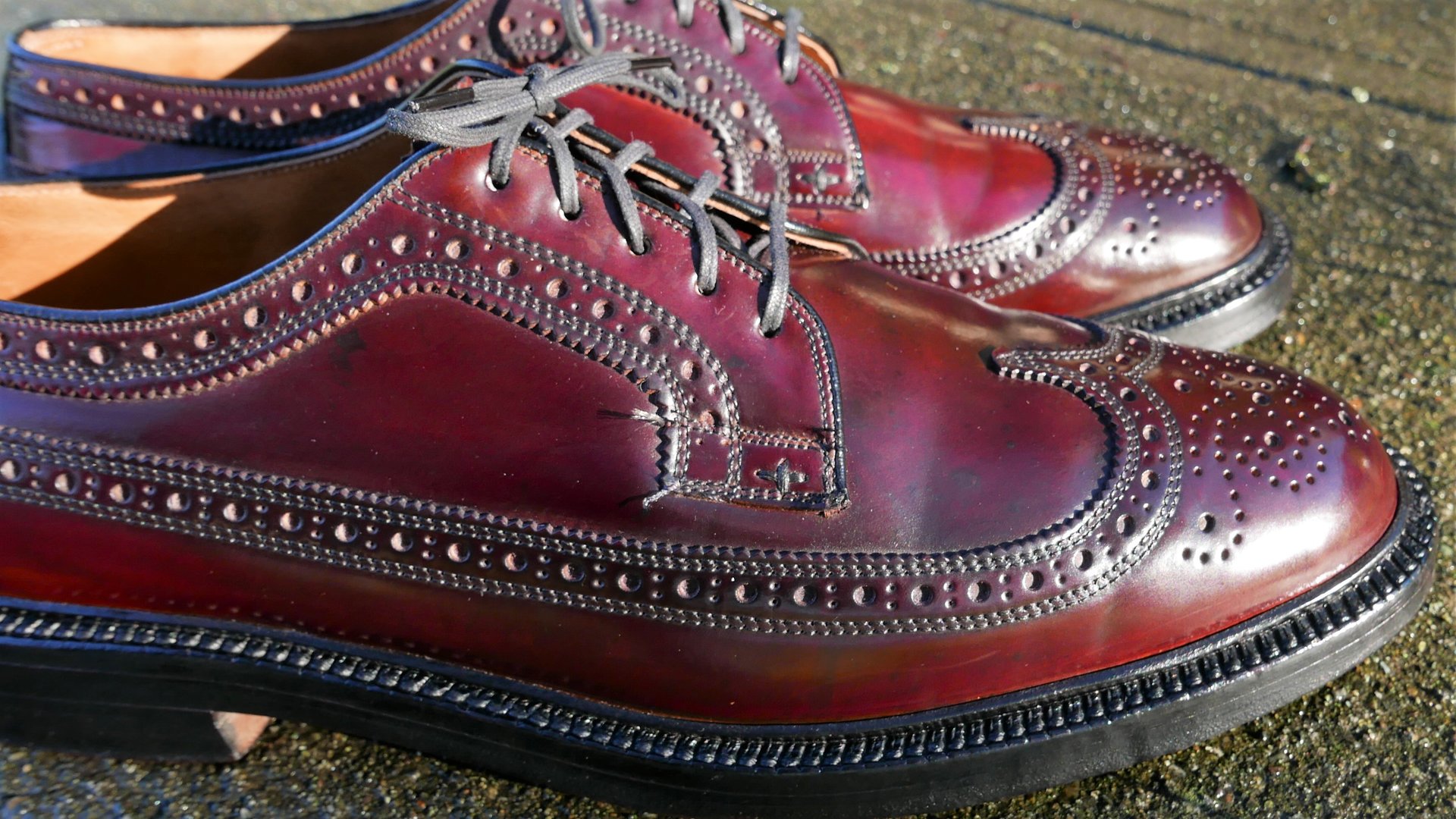 Once cleaned, the pair revealed patina and marbling that is distinctive to Shell Cordovan. Some of the patina was likely due to the residue of old waxes or creams. The color variations were most noticeable in full sun. 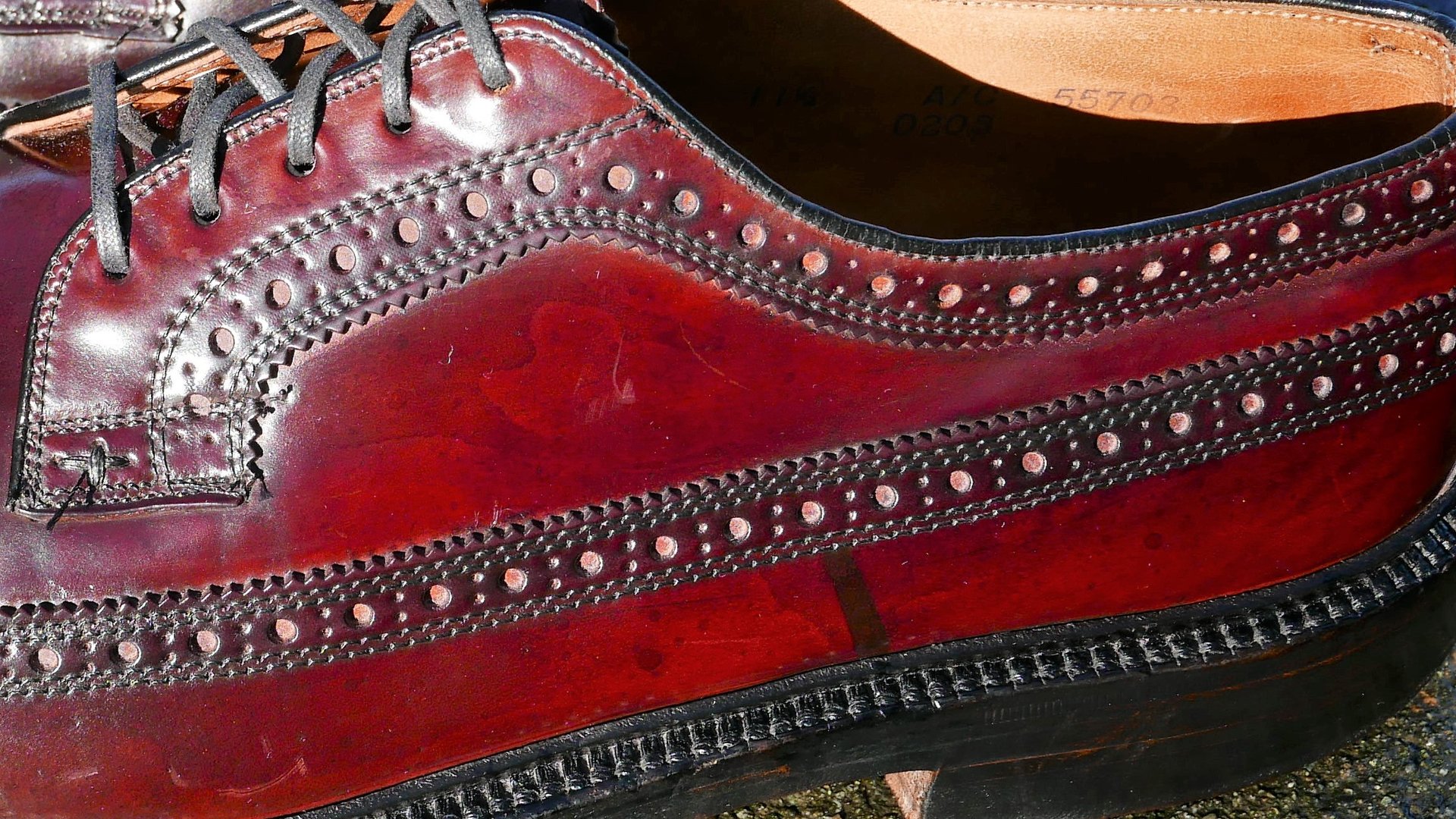 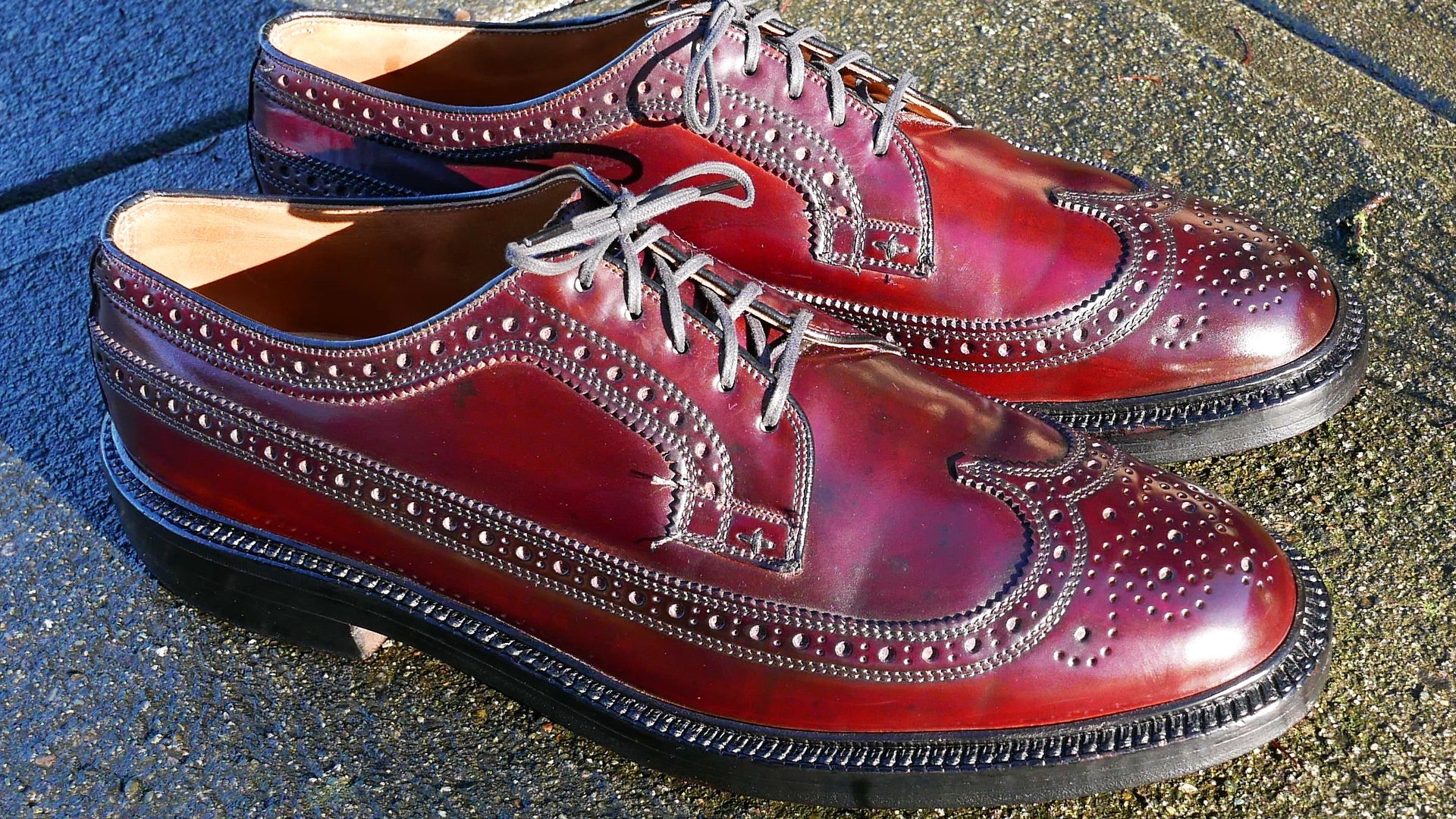 Below is the finished pair in indirect light. The shoes have a nice warm, burgundy brown color. 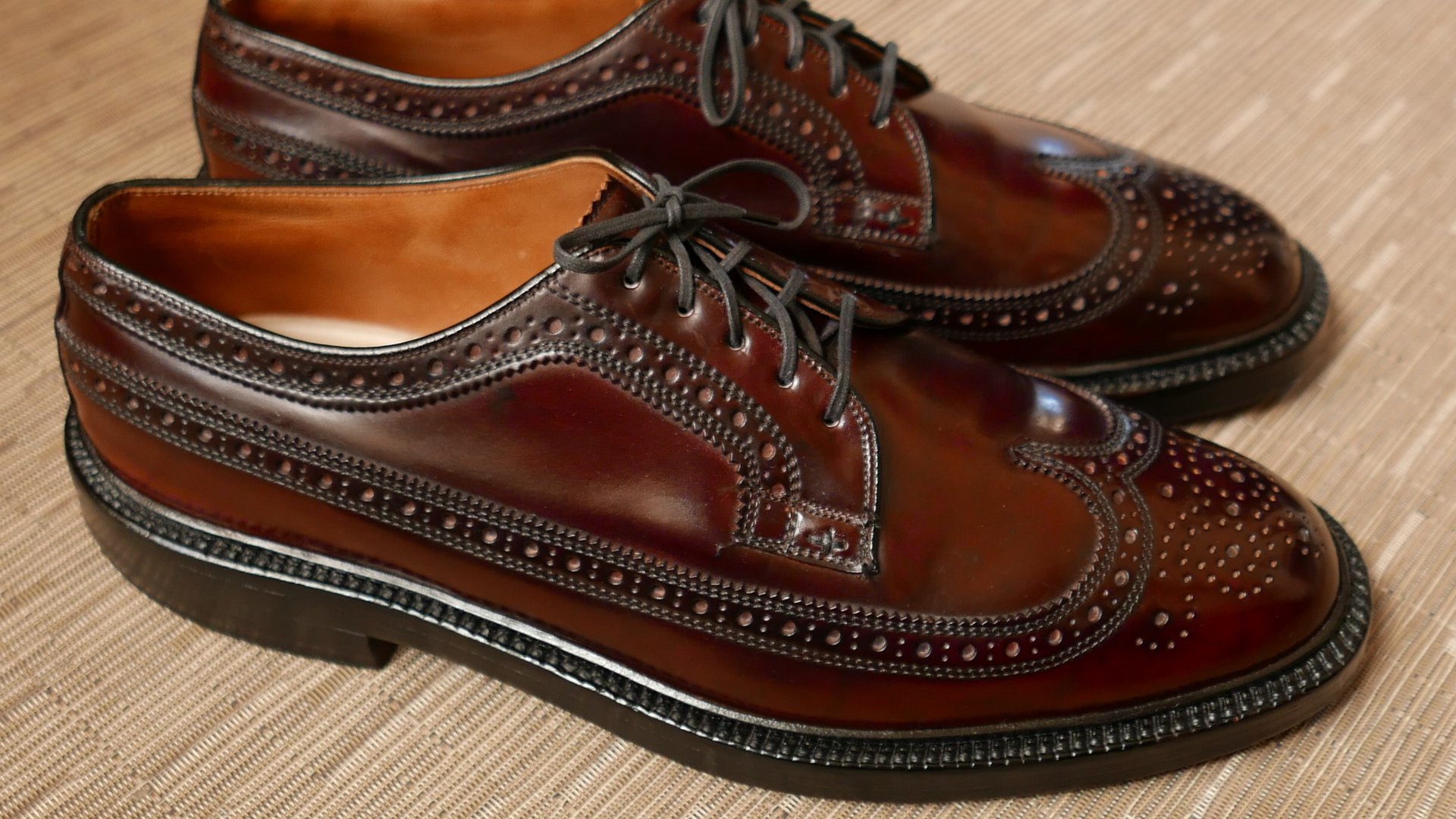 I did an epic restore of a similar pair two years ago. The shoes didn’t fit well, and I stopped wearing them. That pair now resides in my island of misfit shoes. This pair fits much better. It is a size 11.5 C while the other pair is a 12 C. I find the Nettleton “Duncan” last to run a bit big. I also have size 11 D and 11.5 D in non-Shell pairs. And until I had this 11.5 C, I thought the 11 D fit the best. For comparison, I normally wear a 11.5 D in Florsheim Kenmoor, a 11 D in the Alden Barrie last and prefer 11 D in Allen Edmonds 65 last. 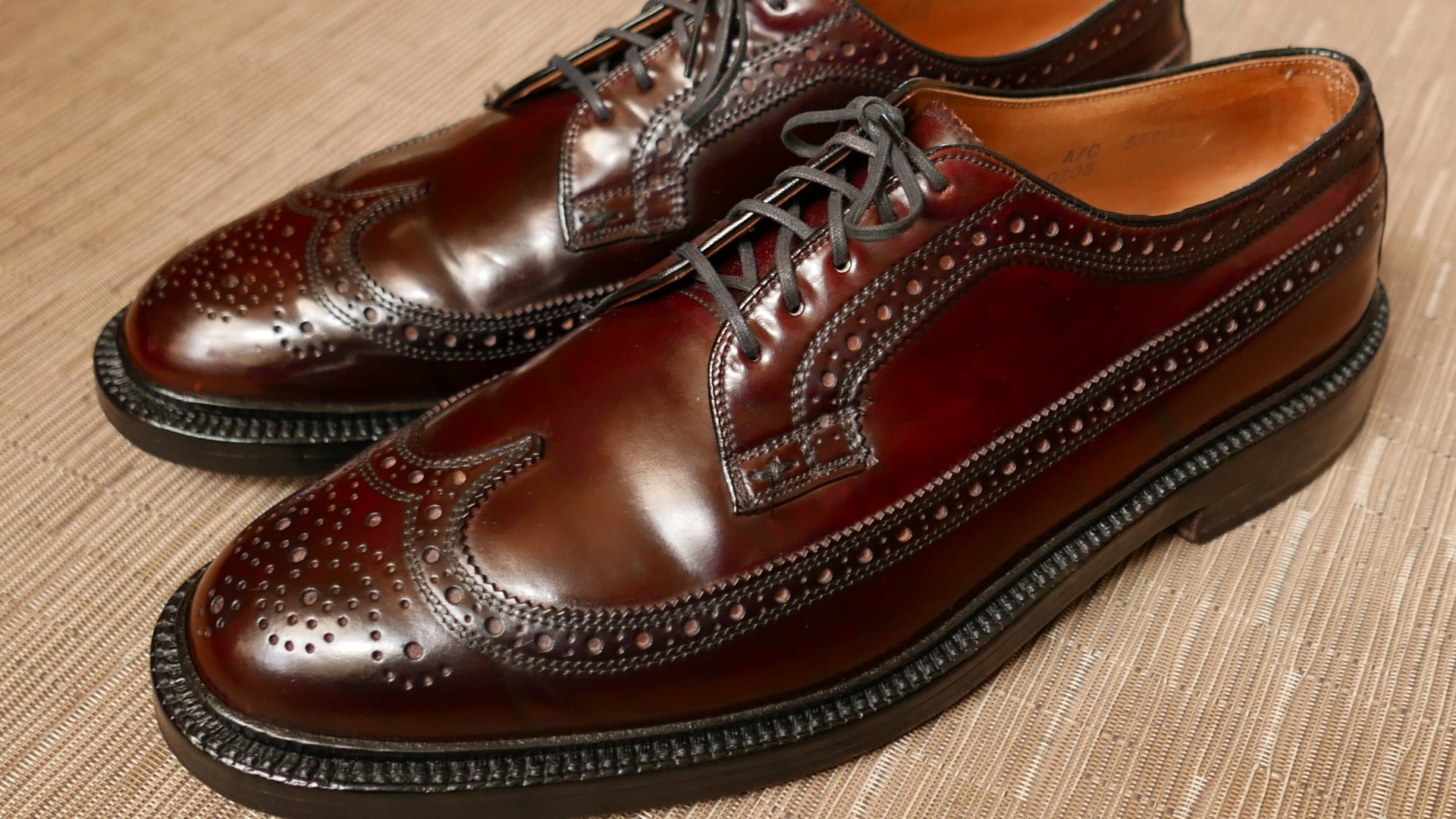 The previous Nettleton Shell restore was on a model 4063. The construction of that pair and this 0208 model appear identical. I believe the 0208 is an older model and I would date this pair as likely from the late 1960s or early 1970s. But this dating is a guess, the pair has no discernable date code and I have no vintage Nettleton shoe catalogs. 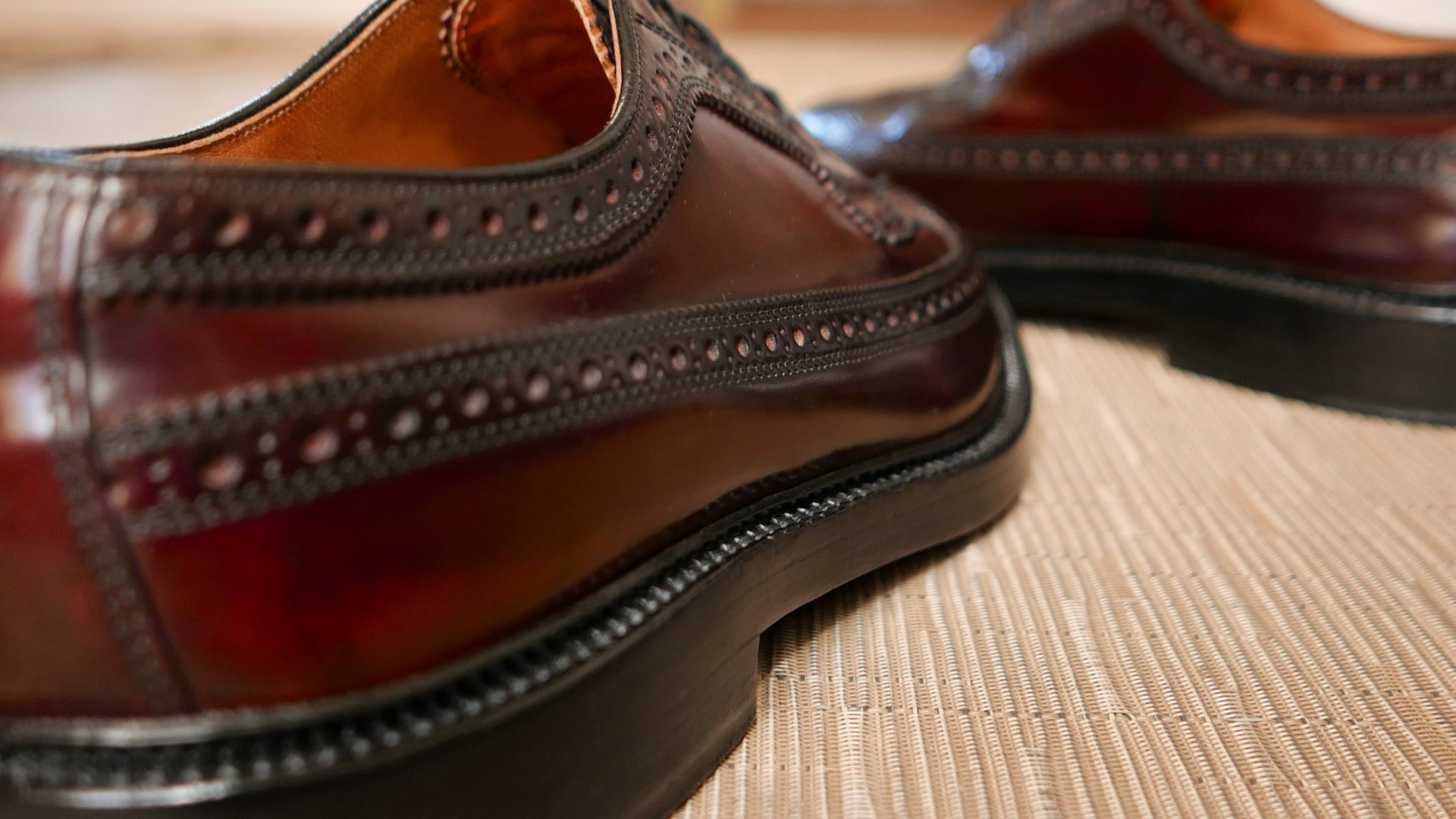 “Traditionals” was the top of the line for Syracuse, New York based Nettleton. The long wing version of the Traditionals line have a cross stitched into the front of the eyelet facing. This embroidered cross was unique to Nettleton but was recently adopted by Grant Stone and also appears on the J Crew Ludlow line. 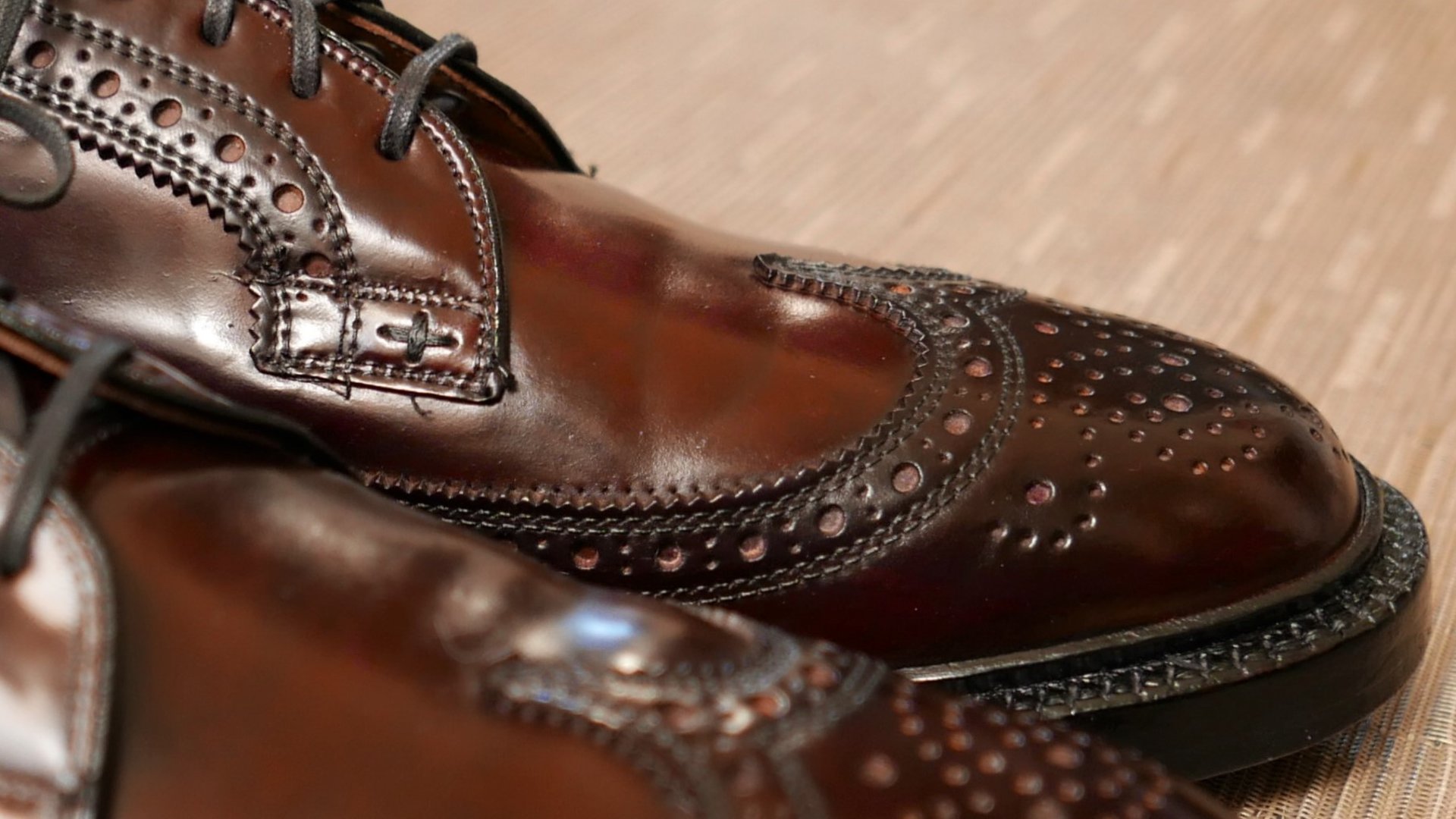 Some Nettleton pairs are hit or miss when it comes to quality but the construction on this pair is top notch. This pair is fully leather lined with a leather insole and padded leather heel pad. The soles are 0.5″ thick and the pair has a stacked leather heel with an embedded steel plug. The welt stitching is well done. The upper has two rows of stitching on each seam. 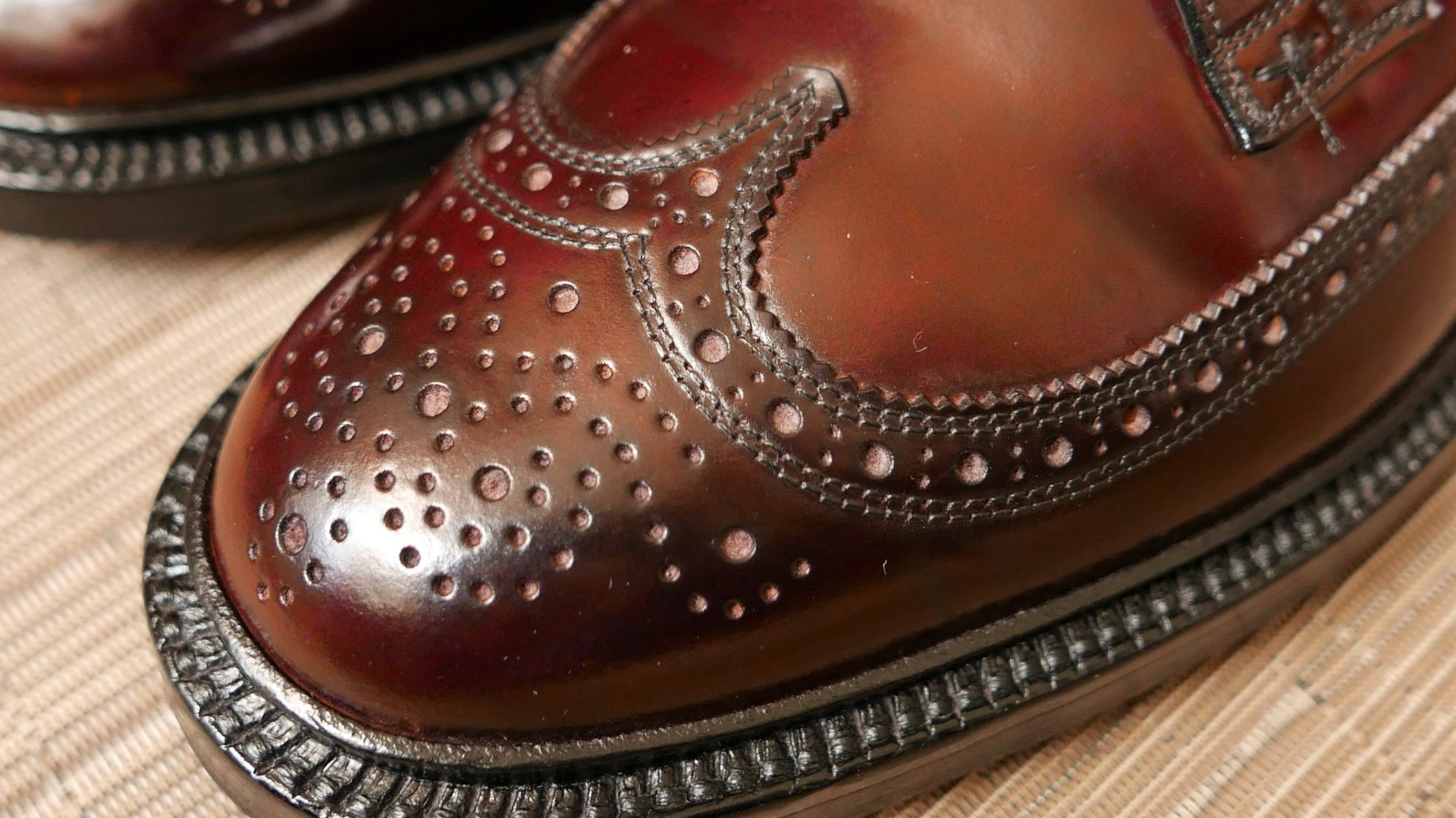 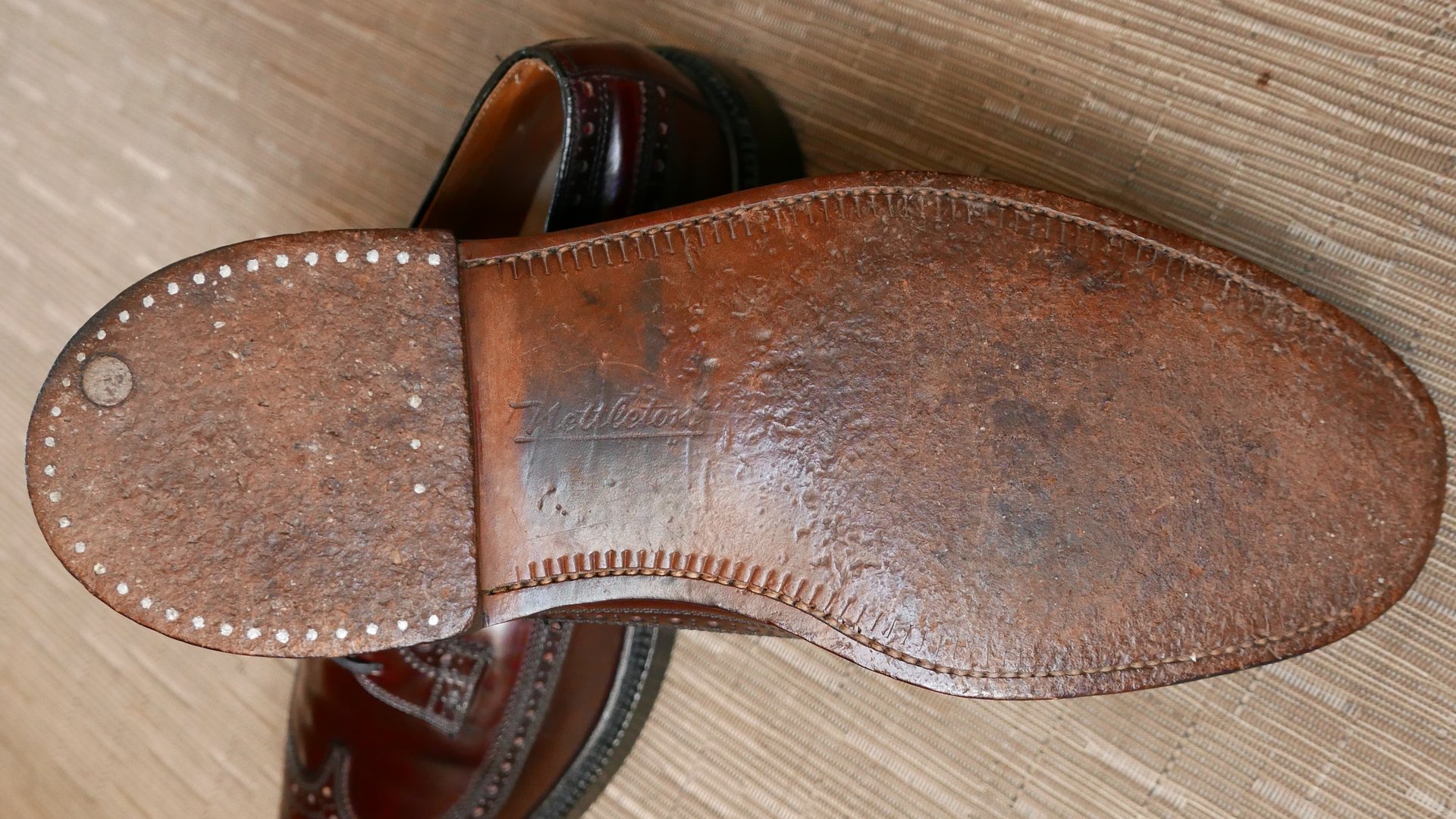 This is actually the second Nettleton 0208 pair I have purchased. The first pair I bought off eBay in 2015 stated this in the description, “Only serious people with an interest in Broge [sic] Style of shoes, should respond”. This statement challenged me. I am serious (usually). And have interest in brogues (always). So, I felt justifiably qualified to own the pair. There was no application but I ended up being the top bidder. Unfortunately, after the pair was shipped, the package was lost in the mail. The shoes never made it past the Minneapolis USPS distribution center. I checked the tracking for a month or so and then sadly said, “Auf Wiedersehen”. 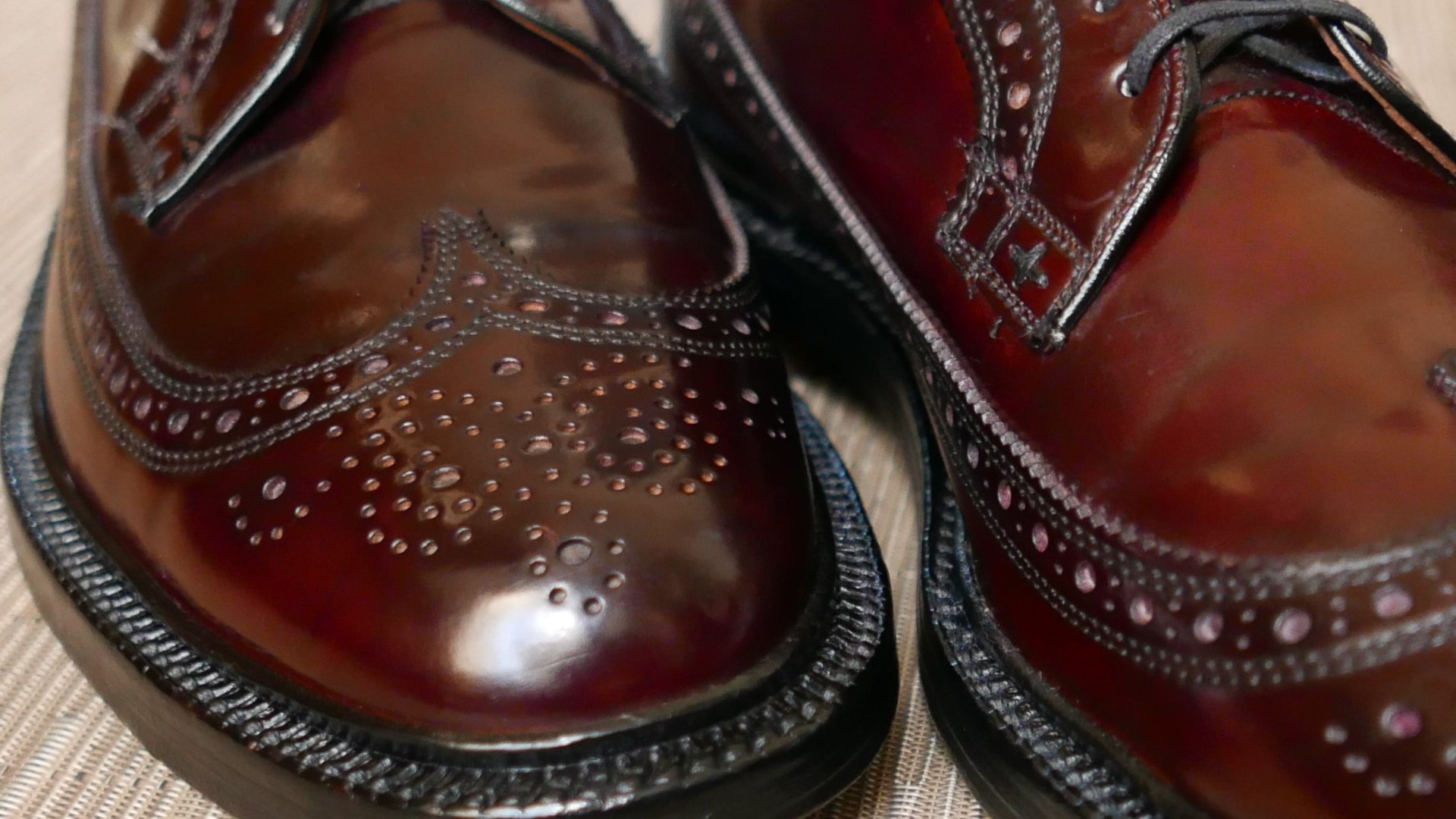 This was a fun project and I was happy with how the pair turned out. Since you can no longer buy made in USA Nettleton shoes (Nettleton closed their Syracuse factory in 1984), I was happy to find a lightly used pair in my size. If you are interested in vintage Nettleton shoes, I have a few other articles on the brand as well as a guide to the Nettleton Shell Cordovan models that occasionally appear on eBay for sale. 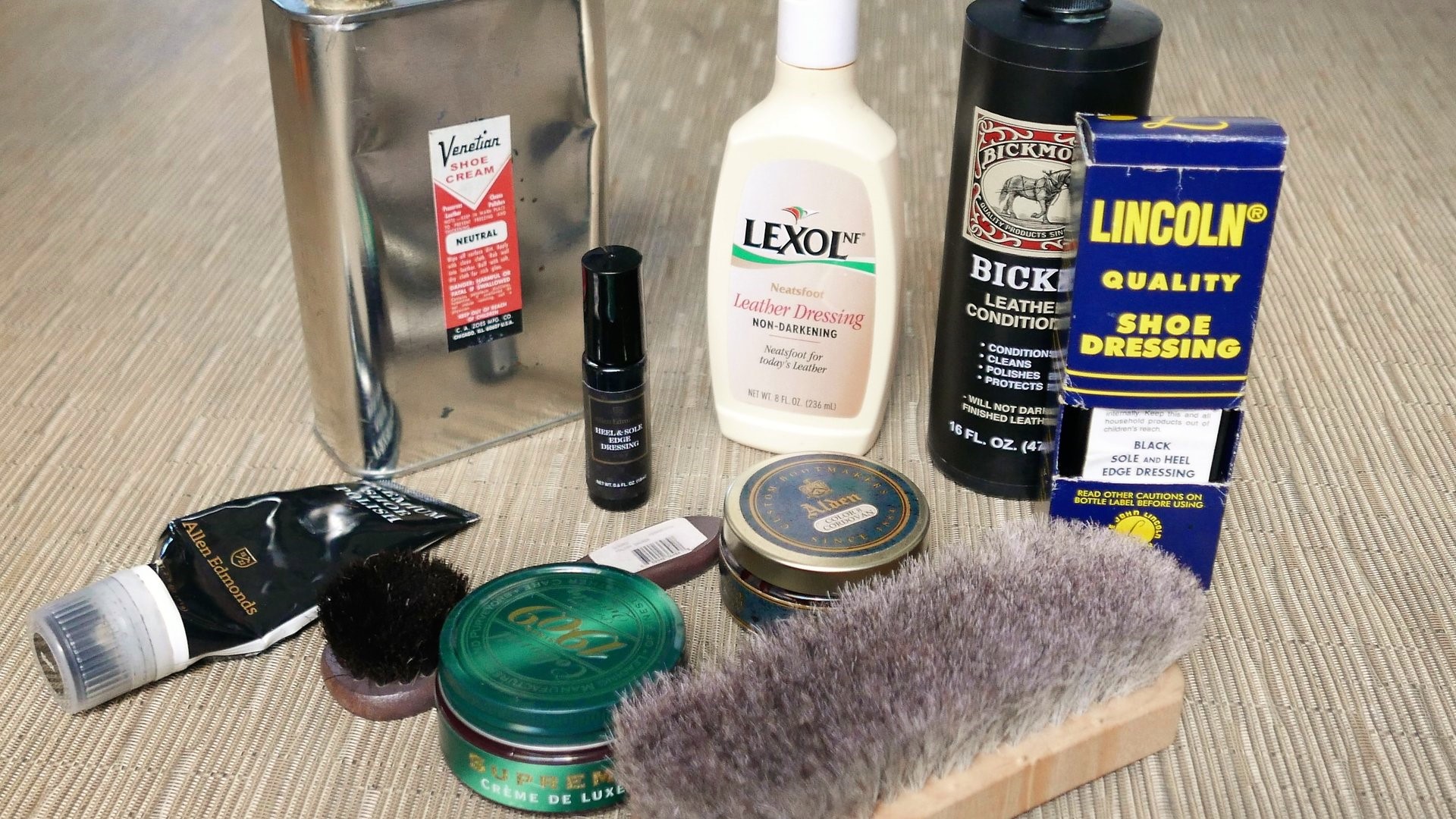 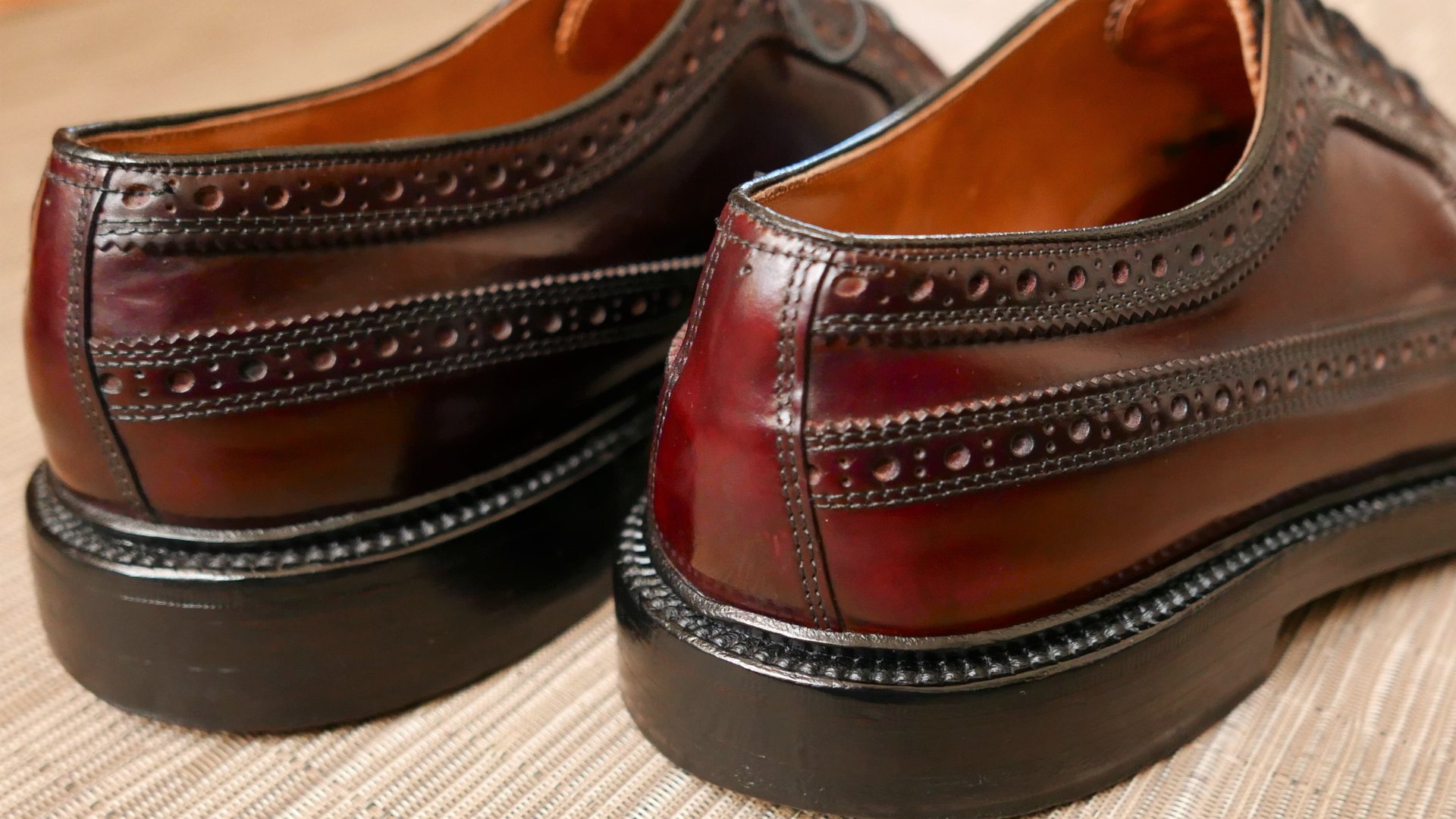 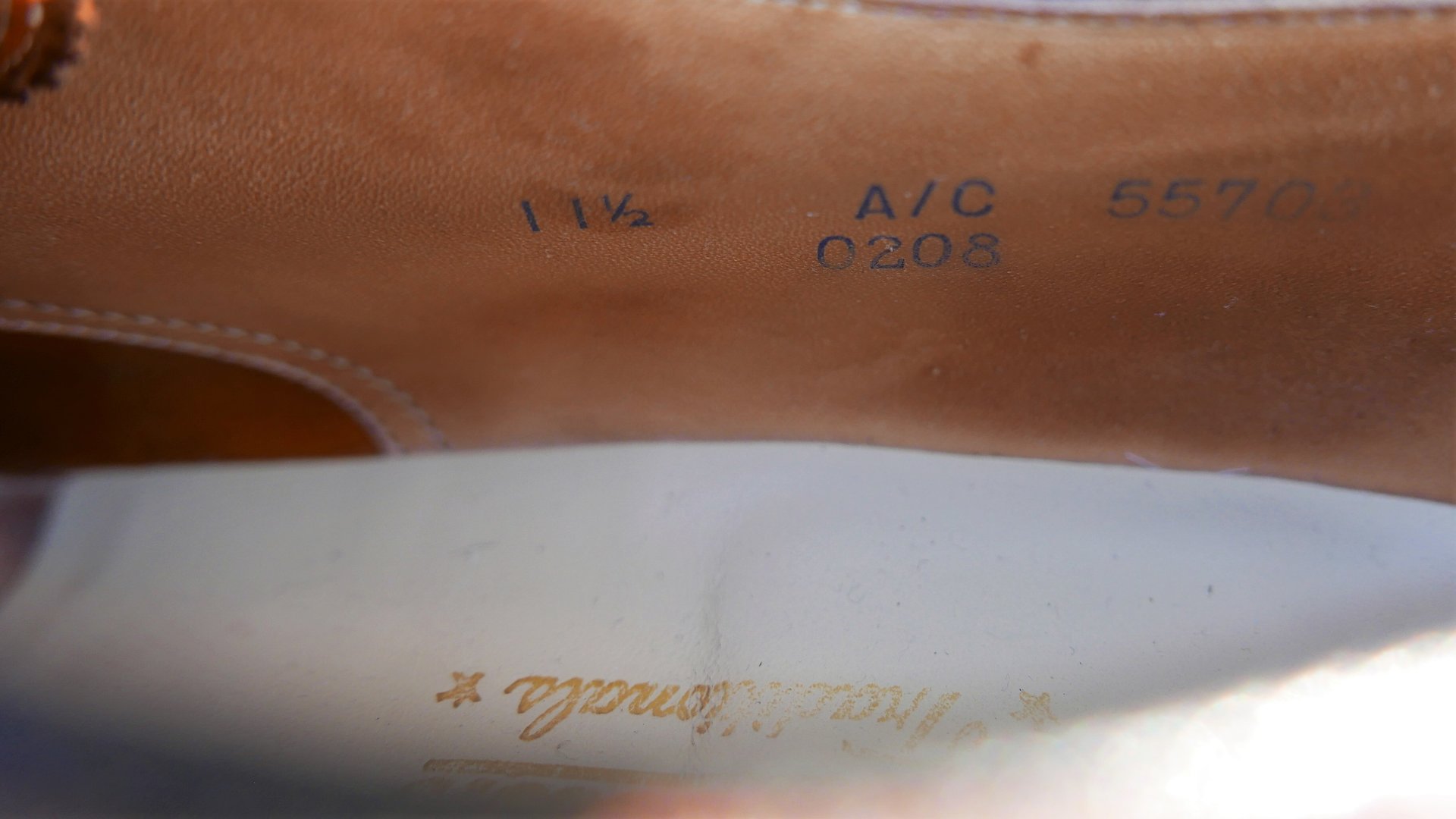 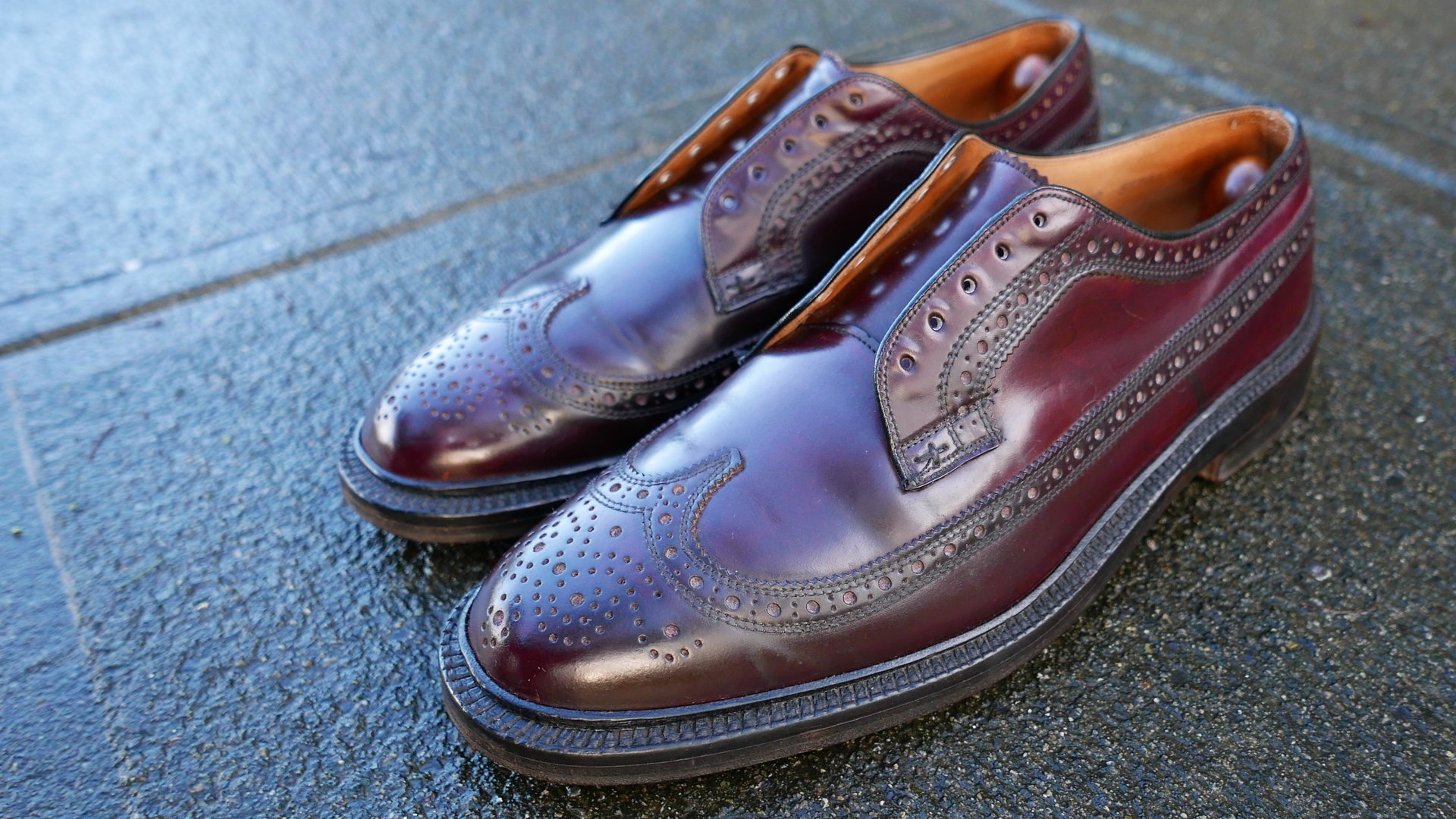