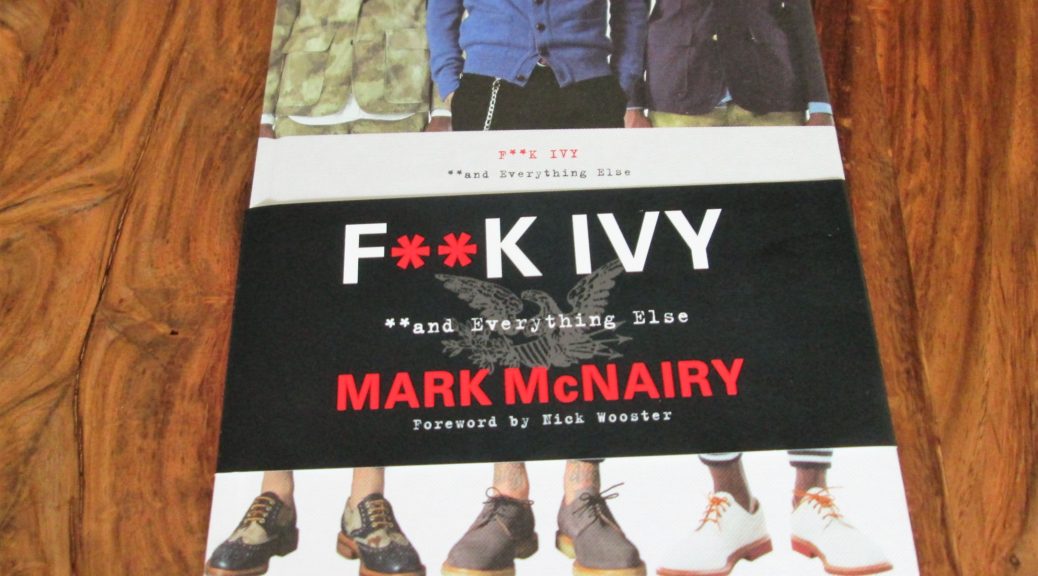 Here are a few books I read recently. Yes, I read. I work, read, and try to buy your dad’s or granddad’s shoes. SELL THEM TO ME.

My first review is of “F–k Ivy and Everything Else” by Mark McNairy.

Mr. McNairy is fashion designer (maker) and known for a couple thing: his blending of traditional Ivy/Trad style with street styles; and looking serious. Very serious. “F–K Ivy” is a photo book in which he goes through the core pieces of his style, gives fashion advice, covers his influences, and provides some random thoughts about bubble baths and fried chicken. The title is take off of the classic Ivy style book, Take Ivy.

The book is a very quick read but I have reread it three or four times now. The best parts of it are where he describes his core, masculine style in a prescriptive manner. These are some of his key wardrobe pieces:

He takes these traditional pieces and mixes them with such things as camo and bold monogramming. That’s what gives the edge to his clothes. My favorite quote of the book is, “I like to think I make clothes for people who can think for themselves”.

What is somewhat surprising about the book is that Mr. McNairy doesn’t highlight much of his own work. Most of the photographs are vintage shots of celebrities that give a visual for his commentary. I wish he did include more of own work though. He would probably would retort – “Google it”. But I won’t. So its a gap.

He devotes 15 to 20 pages to shoes. He describes brown long wings as “The first pair of proper shoes you should buy”. Hear, Hear. He also covers a few other shoes such as black PTBs, white bucks, desert boots and Chuck Taylors. His shoe designs are a mash up of 1960s American Cold War styles with modern features such as vibram or commando soles and camo.

Some of his various statements need interpretation such as “Learning a trade is the first step towards failure”, which is opposite a photo of an expensive looking hammer. What does that mean? Don’t learn a trade? Or maybe go ahead and learn a trade but stay at the first step, do not progress to the second step. No idea.

Other comments need no interpretation such as his disgust of using restaurant pens (not convincing). And that happy socks make him angry (sure). Or his disdain of Johnny Depp’s clothing choices (agreed).

The book has a forward by Nick Wooster who is probably the coolest guy in whatever room he is in and directly or indirectly responsible for half the arm sleeve tattoos in the USA.

The book feels like it was rushed out and lacks depth. So buy it if you are looking to unload $25 on something. And if you won’t get annoyed by the author’s stream of consciousness writing style. Get the hardback and skip the Kindle version. Unless you are glued to your smart phone. And looking at selfies on Instagram.

The next book on my list (and keeping with the Ivy theme), is “Ametora: How Japan Saved American Style” by W. David Marx.

This book is a longer read and covers the history of Japanese fashion from the 1800s to modern day but much of the book is focused on the post World War II era. During this time, a few key Japanese designers took 1960s American Ivy League styles and adapted them for the Japanese ready to wear clothing market. While the USA went hippie in the late 1960s, the Japanese grew and expanded on this style.

The book has a chapter on the team and story which produced “Take Ivy“. The purpose of Take Ivy was to influence Japanese consumers to buy clothes and in particular, clothes made by VAN, a prominent Japanese clothing retailer. Its an interesting story because the team took a big risk on the project due to the exorbitant costs of travel at the time. When the team arrived in the US, they found American style to be, in general, lacking. After visiting a number of locations, the team found what they were looking for on the campuses of American Ivy League universities.

Eventually (and ironically), when the Ivy style became popular again in the United States in the 2000s, American designers and consumers looked to Japan for inspiration. Mark McNairy is quoted in the book.

The book also covers the history of jeans in Japan. Sadly, not much ink (or pixels), is devoted to men’s dress shoes.

The book was recommended to me by a fellow vintage shoe enthusiast and I bought the Kindle version. I read it on a recent trip. Its a good read. And yes, I am glued my smart phone. But I avoid selfies. 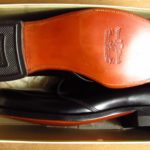 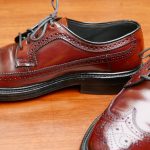 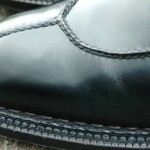 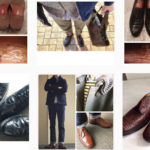 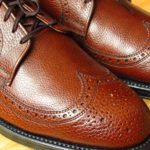